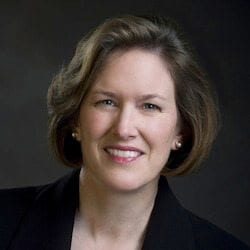 Elyse Allan is the former President and CEO of GE Canada, a position she held since 2004, and Vice-President of the General Electric Company. Elyse’s career includes consulting and executive leadership roles with GE and other companies in the US and Canada spanning several industries including energy, healthcare, plastics and consumer products. Prior to her most recent role at GE, she led the Toronto Board of Trade as President and CEO, and previously served as a Senior Executive at Ontario Hydro.

Elyse is a member of the Board of Brookfield Asset Management, a Canadian global alternative asset manager. She is a Fellow at the C.D. Howe Institute and co-chair of its Energy Council, a Board member of MaRS Discovery District, and an Eco-Fiscal Commission Advisory Council member. Recently she completed her term as director of the Conference Board of Canada and of the Business Roundtable. Elyse holds honorary doctorates from several Canadian institutions and in 2014 the Governor General appointed her a Member of the Order of Canada.

Elyse earned her Bachelor of Arts degree from Dartmouth in Hanover, N.H., USA and an MBA from the Tuck School of Business at Dartmouth where she currently chairs the Board of Advisors.