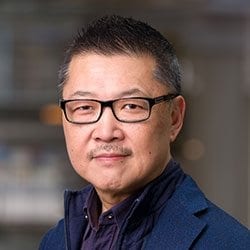 Yung Wu is CEO of MaRS Discovery District, one of the world’s largest innovation hubs. Since 2008, MaRS-supported companies have raised over $8.2B in capital, generated over $5.6B in revenue and currently employ over 20,400 people in health, cleantech, fintech and other sectors.

As a serial entrepreneur and investor, Yung has built breakthrough scale-stage companies in enterprise software, mobile analytics and big data, media and entertainment, technology services and pharma drug development. He is co-founder of two not-for-profit organizations, the Coalition of Innovation Leaders Against Racism (CILAR) and DifferentIsCool (DiSC).

Yung currently serves on the boards of OMERS, the Toronto Region Board of Trade and Antibe Therapeutics Inc. (TSE:ATE). He is a member of Green Shield Canada and was recently appointed to Canada’s Net-Zero Advisory Body.

Yung has been recognized as one of Canada’s ‘Top 40 under 40’ and for leading one of the “50 Best Managed Private Companies” in the nation. Yung has a B.Sc. Computer Science, Economics and Mathematics from the University of Toronto and is a graduate of the Entrepreneurial Masters Program at the Massachusetts Institute of Technology, the Young Presidents Organization (YPO) and the Institute of Corporate Directors (ICD.D).