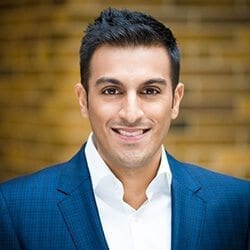 Adam was the head of MaRS’ financial technology (FinTech) cluster. In 2015, MaRS established the country’s first dedicated global innovation vertical around technology for the financial services industry (“MaRS FinTech”). As Head of MaRS’ FinTech Cluster, Adam and his team directly managed a network of several hundred startups, a multitude of financial institutional partners, and global venture capital and fintech innovation partners in Brazil, Hong Kong, Singapore, London, New York and San Francisco.
Prior to MaRS, Adam served as Vice President of Business Development and Emerging Payments at MasterCard WorldWide where his team was responsible for the company’s strategy and partnerships in digital payments. Additionally, Adam was a member of MasterCard’s corporate development and competitive intelligence strategic advisory committees. Prior to MasterCard, Adam held the position of Global Head of eCommerce and Social Networking Partnerships at BlackBerry. Spending a majority of his time in Silicon Valley in California, Adam and his team were responsible for the overall strategic partnerships between BlackBerry and various companies including Facebook, Twitter, LinkedIn, Amazon and eBay.
Adam holds a master’s degree in business administration from Wilfrid Laurier University, and an honours engineering degree in computer and systems engineering from the University of Guelph.
Twitter: @adamnanjee