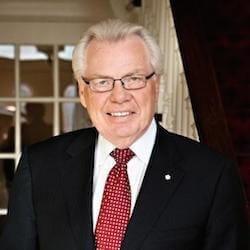 Dr. Calvin Stiller is a lifelong innovator whose work encompasses science, business and public service.  As a scientist, Dr. Stiller was principal investigator on the Canadian multi-centre study that established the effectiveness of Cyclosporin in transplantation, which led to its worldwide use as first-line therapy for transplant rejection.  He was the first to demonstrate that Type I Diabetes could be altered by an immunosuppressive agent confirming that it was an autoimmune disease.  He has published over 250 scientific and medical papers, co-edited five books and is the author of Lifegifts, a book about organ transplantation.

In 1985 Dr. Stiller established the Multi-Organ Transplant Service in London, arguably one of the first in the world and served as its chief for over a decade. He has been president of the Canadian Society of Nephrology and co-founded the MaRS centre, the Ontario Genomics Institute, the Ontario Institute for Cancer Research, which he currently chairs, the J. Allyn Taylor International Prize in Medicine and the Canadian Medical Hall of Fame. Dr. Stiller is also an entrepreneur and businessperson. He founded two firms that eventually employed 4,000 people in healthcare and technology services, which were later sold and taken public. He established four venture capital funds to invest in innovation, including the largest life sciences fund in Canada.

Dr. Stiller received his medical degree from the University of Saskatchewan in 1965 and his fellowship in the Royal College of Physicians and Surgeons of Canada (FRCPC) in 1972, following seven years of post-graduate studies in Edmonton and London, Ontario. He is a member of the Order of Ontario and officer of the Order of Canada. He is the recipient of four honorary degrees and numerous others, including the Medec Award and the Canada Gairdner Wightman Award.