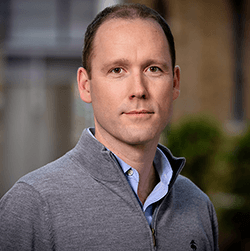 Jason Gray was a senior advisor with MaRS Cleantech Venture Services. Jason has played a leading role in both renewable energy and agriculture in Canada and internationally. His most recent role is as the co-founder of SunFarmer, a Y Combinator-backed social enterprise bringing solar to developing markets. The company has raised over $5 million in capital and capital commitments to support energy access projects in Southeast Asia. SunFarmer’s projects have impacted tens of thousands of people by improving access to reliable healthcare, education and water.
Prior to SunFarmer, Jason was the General Manager (Canada) and VP with SunEdison, the world’s largest renewable energy developer. In this role, he held full P&L responsibilities for SunEdison Canada and oversaw business development activities. Under Jason’s leadership, SunEdison constructed and financed Canada’s first utility scale solar project; completed over 350MWs in project development and module sales; opened a 110MW module manufacturing facility in Newmarket, Ontario; and grew annual revenues to over $250 million.
Jason also worked at MNP where he led various engagements in energy and agriculture. Prior to MNP, Jason held a senior management role with Cargill, the world’s largest private company. There he oversaw product safety of 35% of Canada’s domestic beef market and 50% of Canada’s beef exports. Jason holds a bachelor’s degree and MBA from the University of Calgary.