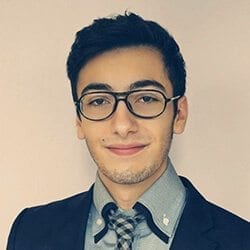 Kourosh is a recipient of Canada’s Top 20 Under 20 Award. As student trustee for the Toronto District School Board and public VP of the Ontario Student Trustees’ Association, he represented over 2.6 million students across the province.
He has been quoted and published by over 120 national and international media outlets, including the BBC, Globe & Mail, TVO and National Post for his student voice advocacy, which led him to establish the Toronto Star Student Hub—a group of aspiring student journalists working with Canada’s largest publication. Beyond his community, Kourosh founded Solar for Life, a non-profit that provides affordable solar energy to communities in Uruguay and South Africa with outreach to over 250 volunteers across high schools and universities in Canada.
In 2012, Kourosh inspired over 15,000 students across Canada to participate in Stick It to Fast Food, an organized boycott of fast food in schools. His most recent work was founding Education Rediscovered—a content-driven student organization for global education reform where he exclusively interviewed Noam Chomsky. Kourosh is currently studying International Relations at Trinity College, University of Toronto.