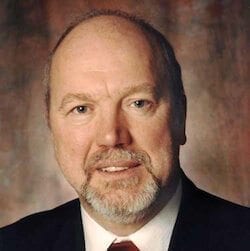 Professor R. Paul Young is a renowned engineering geophysicist. A native of Britain, he was recruited to the University of Toronto in 2002 as the Keck Chair of Seismology and Rock Mechanics and the founding director of the Lassonde Institute of Mining, an international centre of excellence that draws on expertise across multiple disciplines within geosciences and engineering.
He was previously the chair of the University of Toronto’s Department of Civil Engineering, where he led the development of the department’s new framework for urban engineering, building cities that work for people. His leadership was singled out for high praise by external reviewers in 2005 and 2006. He has also been chair of Earth Sciences at the University of Liverpool and head of the Department of Earth Sciences at Keele University in the United Kingdom. Professor Young established the Geomechanics and Rock Physics Laboratory at Queen’s University and the Rock Fracture Dynamics Laboratory at the University of Toronto.
He is on the board of several national and provincial organizations, including TRIUMF, Canada’s national laboratory for particle and nuclear physics, where he is chair of the board of management. He is also on the board of directors of the Fields Institute for Research in Mathematical Sciences, MaRS Discovery District and MaRS Innovation, and is on the executive committee of the Ontario Council on University Research. He was elected a fellow of the Royal Society of Canada in 2007.
During the last several years as the University of Toronto’s vice-president, research, Professor Young has worked collegially with university colleagues, funding agencies, government departments and the private sector to enhance research excellence, innovation and the university’s international standing as one of the world’s great research-intensive universities.