A new plan calls for policies that are as disruptive as the crisis that prompted it. 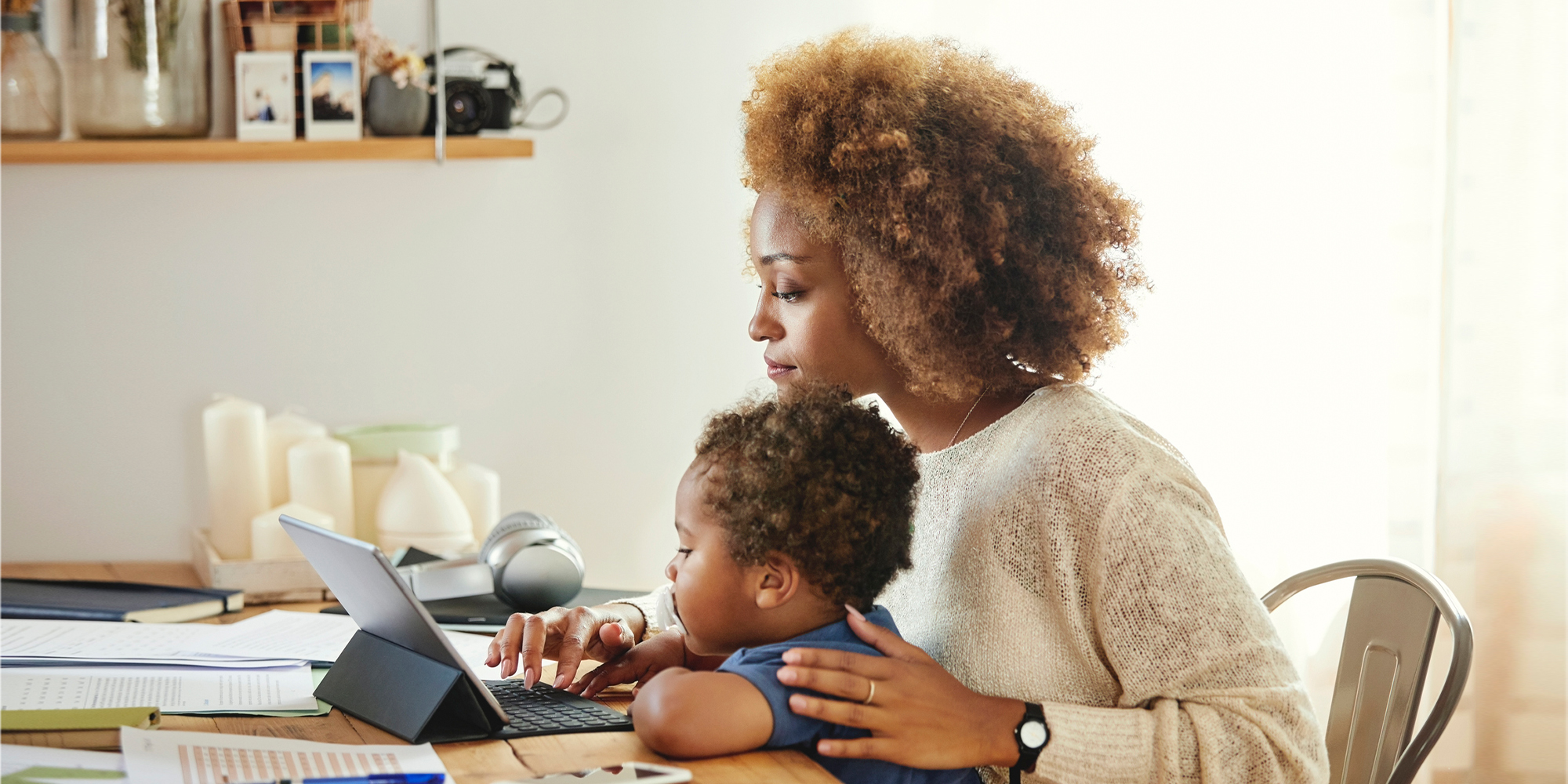 Rachel Robinson is worried. About working during a pandemic. About her daughter’s first year of kindergarten. And about the very real prospect that she may find herself back in lockdown with a four-year-old and a full-time job this fall.

“There’s so much uncertainty … it’s a lot,” says the business development associate at a market research software provider in Toronto.

Robinson was drawn to the tech sector because of its reputation for a more progressive work culture. As a single parent, a flexible workplace is a necessity. So, too, is affordable childcare, as she relies on a childcare subsidy to make ends meet.

When you’re a single working parent, juggling is a survival skill you pick up quickly. But when the pandemic hit, Robinson saw those skills sorely tested. Her daycare centre had to close. Layoffs hit her company, and as the only person left on her formerly four-person sales team, her workload increased exponentially. She worked whenever her daughter fell asleep, often until 2 a.m.

“There was no balance between work, life and parenting,” she says. “I lost the boundary of when it’s time to close the laptop.”

Rachel Robinson is overwhelmed. And she’s not the only one. In the current economic climate, many women are reaching their breaking point.

Laid off at disproportionately higher rates than men, women are facing a precarious employment future. Women with school-age kids haven’t been able to jump back into the labour market as easily as men with kids, and many women with lower incomes and education levels are struggling to recover job and income losses. And with reduced access to childcare and looming concerns about school openings, some women are dropping out of the workforce altogether. Add the factors of race, lower economic status, immigration status, gender identity and disability to gender and the impacts increase to an almost impossible degree.

That a vast cross-section of Canadian women has absorbed most of COVID-19’s economic blows should be an ALL CAPS concern. Solutions are needed urgently. A present-day problem with historic roots, the current moment should be met with policies as disruptive as the crisis that prompted it.

Call it the cure for what’s ailed us as a society for far too long.

A she-cession demands a she-covery

Women’s greater economic vulnerability due to COVID-19 has seen this recession dubbed a “she-cession.” But diagnosing the situation in headline-friendly terms doesn’t amount to much if there isn’t an economic recovery plan in place that fundamentally addresses the longstanding societal problems (sexism, structural racism, the chronic underfunding of the care economy), that COVID-19 has exacerbated.

“This time we have to do something about equity because it’s women who have seen the lion’s share of job losses,” says Armine Yalnizyan, an economist and Atkinson fellow.

A level playing field and a healthy economy aren’t often seen as complementary ideas. But to address what Yalnizyan calls a “historically unusual” moment, many are calling for a similarly novel response: a recovery plan that puts equity in the foreground — a “she-covery.”

In late July, the YWCA and the Institute for Gender and the Economy at the University of Toronto’s Rotman School of Management, issued an eight-point plan that aims to build up the economic health and well-being of the most vulnerable populations. A Feminist Economic Recovery Plan for Canada: Making the Economy Work for Everyone calls on federal, provincial and municipal governments to shape post-pandemic economic recovery plans that benefit those hit hardest by the pandemic.

“What lies before us is an opportunity to reimagine our future — a future that disrupts the thinking about who counts in our economy,” write the report’s authors.

One way to do that is to make it easier for women to work and to pay them properly for the work they do. The report calls for governments to acknowledge that the caring economy — a female-dominated labour force that spans everything from women’s unpaid labour in the domestic sphere to personal support workers in long-term care homes to childcare services — is essential to the healthy function of society and support it accordingly. That includes paying workers better, investing in proper safety measures, providing adequate resources and increasing the number of affordable childcare spaces

There is value (of the old-school financial kind) in seeing social benefits as economic benefits. Investing in affordable accessible childcare, for instance, is about more than “putting mommy back to work,” Yalnizyan says. “All of the evidence we’ve had in the last 25 years shows that when you invest in early learning and childcare for at-risk children, it literally pays for itself over their lifetimes.” Moreover, when mommy does go back to work, she pays more in income taxes over her lifetime than the government spends in subsidized care.

The YWCA report cites UK research that found spending just 1.9 percent GDP results in the creation of 2 million jobs, raises the employment rate by 5 percent, reduces the gender employment gap by 4 percent and minimizes the number of families living in poverty.

We have to look at net benefits of investment in social infrastructure, Yalnizyan says, or else inequities will deepen. “If we continue to talk about publicly funded programs as outlays and refuse to talk about the net benefit — in other words how much are we getting back by doing this compared to not doing it — we will never invest enough.”

Though Robinson jokes that she thinks she has “PTSD” from lockdown, she feels “lucky” to have the choice to work from home.

Women working in tech may be in a better position than lower-wage workers who don’t have the option to work from home, but they aren’t immune to the gendered realities of the pandemic.

The tech sector already suffers from a significant gender gap — according to a 2019 Brookfield Institute report men make up 80 per cent of the workforce (That same report found women are still paid less than their male colleagues; Black tech workers even less so.) During COVID-19, however, those numbers may dwindle further. U.S. research suggests women in tech were 1.6 times more likely to get laid off than their male colleagues. Additionally, those who continued working like Robinson, are often shouldering childcare responsibilities and feeling increased pressure to be productive.

More troubling: they might even be working more at home than they did before the pandemic. A Harvard Business study determined people are working more, answering more emails and working, on average, 48 extra minutes a day.

“It’s not just about being tolerant about kids in the background of your Zoom calls,” says Jennifer Hargreaves, CEO and founder of Tellent, a job board and virtual networking program.  “It’s about rethinking productivity and the support we’re giving women. Instead of ‘you need to do your eight hours today, it’s managing priorities, e.g., ‘Here’s what I need you to accomplish. Are you able to do it within this timeline or do you need support?”

If tech workplaces do want to attract and employ female employees, Hargreaves says, providing flexibility is key.“ The No. 1 thing that experienced professional women want from an employer is a culture of flexibility,” says Hargreaves.

Hargreaves is frustrated by how long women have been saying this and how often it’s been ignored in favour of adhering to traditional approaches to work that advantage men. “There was always this disconnect between companies saying, ‘We want more women in leadership’ and what they say when I tell them what they need to do to achieve that.”

It’s also something they need to do to retain talent.

Unable to cope with the demands of her old job at a mobile events company during lockdown, in July Robinson moved to another, more flexible company, where she’s happier and better able to manage. But the last six months has solidified her hope that workplaces will start paying greater attention to the challenges of remote work during a pandemic, especially for women with kids.

“People always say, ‘Say something if you need something,’ but it’s better to have it offered to you rather than having to ask,” she says. “Companies should be more forward about what they are offering parents and show an openness to discuss what the situation is like.”

One thing her new workplace offered: a $900 annual lifestyle benefit that employees can spend any way they want.

“For any working parent, money is where it’s at,” she laughs. She’s already applied it to a vast web of things that make her work/life easier. “I loaded my TTC card, signed my daughter up for soccer, bought a Roomba and paid for cleaning services in my apartment.”

She’d like to see more progressive workplaces. “Society, as a whole, needs to better understand the stress put on women, and especially working mothers. We constantly have to adjust or accommodate to perform in a workplace rather than the workplace being more accommodating to us.”

It’s that cultural responsiveness to the needs of a diverse population of women that YWCA Report authors advocate for adopting now.

“By addressing the gendered impacts of COVID-19, we can build Can­ada’s economy back better. Many people long to ‘get back to normal,’ but the pandemic has made clear that the old ‘normal’ was not good for everyone,” they write.

As Robinson says, women don’t need another “band aid” solution. They need environments built with their success in mind.