MaRS Catalyst Fund, backed by Virgin Unite Canada, to begin investing in business as a force for good 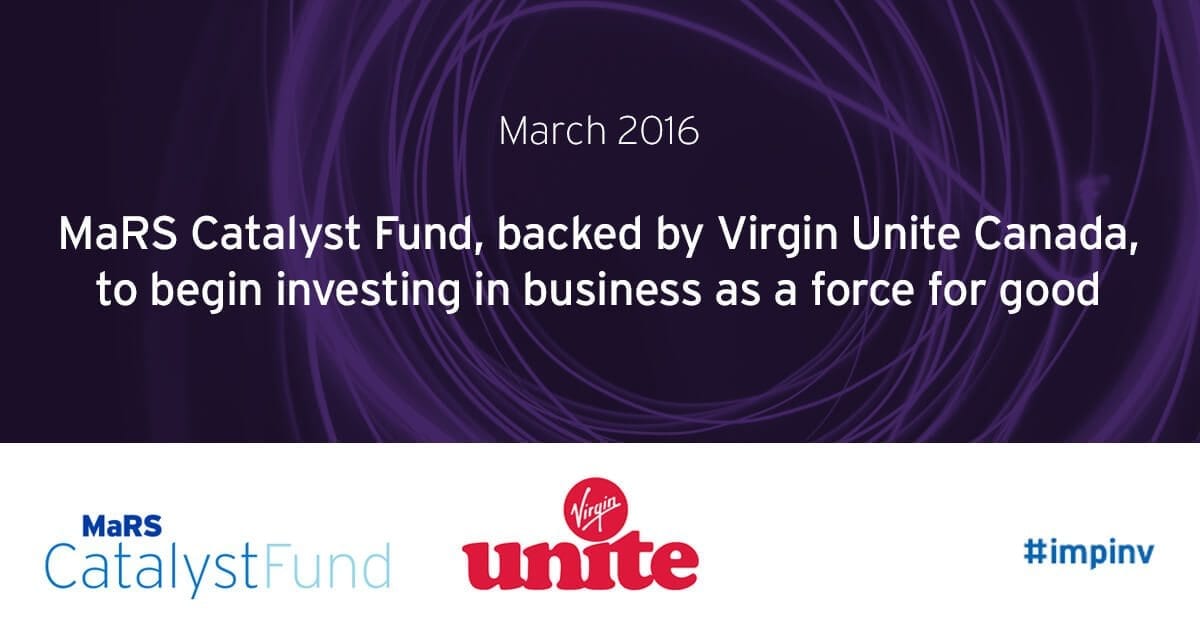 A new Canadian investment fund that puts people and planet alongside profits is about to make its first investments, providing an important source of capital to businesses that are helping to solve entrenched social problems.

The $5-million MaRS Catalyst Fund, run by Toronto’s MaRS Discovery District and backed by Sir Richard Branson’s Virgin Unite Foundation, will invest in early-stage Canadian companies that are motivated by a desire to tackle a social or environmental issue and have the potential to generate strong profits.

MaRS Catalyst is a major step in the fast-growing field of social finance, the new kind of investing that puts the advancement of society alongside financial returns as a key goal.

The fund will leverage the investment pipeline and expertise at MaRS, Canada’s largest innovation hub, to find promising ventures and help them grow. It is currently looking to close two seed-stage investments for $250,000 each in the health and education markets.

We have no shortage of entrepreneurs who are finding innovative ways to push social progress or tackle environmental problems while making profits, but there was a gap in the market for early-stage funding. MaRS Catalyst is helping to address that. —Kathryn Wortsman, Investment Director, MaRS Catalyst Fund

Business as usual should no longer be an option, we have to make business a force for good. By supporting entrepreneurs that put their people, and the planet first, we’re going to help build successful companies. The MaRS Catalyst Fund is well placed to give these aspiring leaders the investment and mentorship they need to get ahead and find a new way to do business. —Sir Richard Branson

Over the last decade we’ve seen enterprises springing up all over the world that are taking on tough social and environmental challenges. We have to nurture these inspirational companies if we’re to create a sustainable future and the MaRS Catalyst Fund is a key component of our approach to doing that in Canada. The fund is uniquely placed to help these businesses grow and positively impact their communities as it connects with MaRS Discovery District and other innovation centres across the country. —Rosanne Gray, Managing Director, Virgin Unite