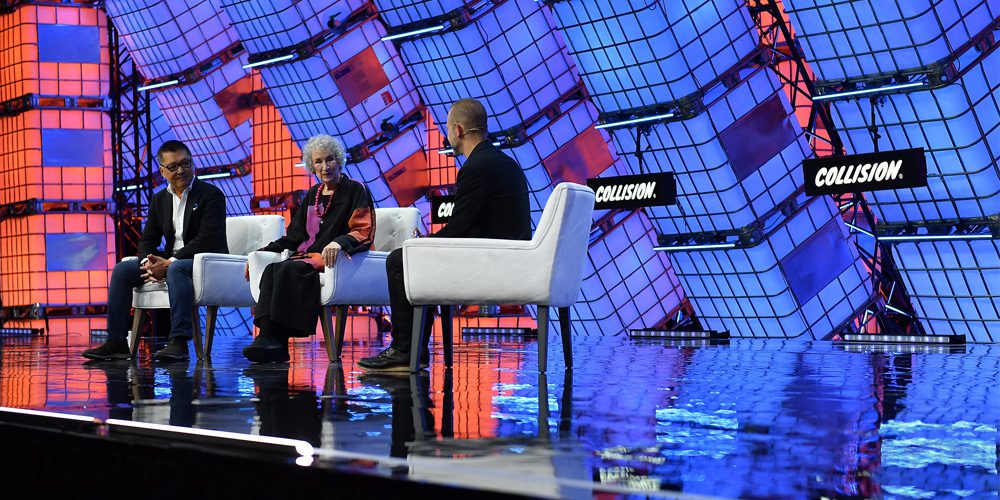 The two friends and collaborators spoke on the main stage as the massive tech conference returned to Toronto for the first time since 2019.

At last week’s Collision Conference, author Margaret Atwood and MaRS CEO Yung Wu joined Gideon Lichfield, Wired magazine’s editor-in-chief for a wide-ranging discussion on the conference’s main stage. Atwood and Wu have collaborated frequently on projects to support Canadian entrepreneurs and last year, Atwood was a judge in the $1-million MaRS Women in Cleantech Challenge. Their freewheeling conversation took in the future of tech, social issues and climate change.

Here are five takeaways from their discussion:

Optimism beats cynicism — even in these fraught times

A pandemic, a climate crisis, inflation, a sriracha sauce shortage — there’s a long list of reasons for anxiety right now. But Atwood, who was born in 1939 just after the Second World War broke out, can remember when things were a lot worse and people didn’t have many choices — or vaccines. “I’m pretty optimistic. I was impressed with how quickly the vaccines were developed,” she said. “It is not the worst of times yet. And we are still at a moment where we could turn it around.”

Wu added that if you are in the business of creating something from nothing — as entrepreneurs are — “you’d better be an optimist.” He believes we’re in a breakthrough moment. “I bet on people. Miraculous things are done by small groups of committed people.” Wu highlighted companies like BrainBox AI, which makes buildings more energy efficient, and Carbon Engineering, which captures carbon dioxide out of the air, as companies with technologies that could have an outsized impact on climate change.

Politicians should be a lot more worried about climate change

Atwood mentioned that her friend Les Stroud, a survival expert who stars on Survivorman, says you need four things to get out of a sticky situation: knowledge, the right equipment, willpower and luck. She said we have the knowledge and equipment in the clean technologies that have been developed in recent years. “It’s the willpower that we are missing at the political level. And we’re going to need the luck.” When discussing the potential consequences of climate change, she added that “the kids are scared already. We have to go from scaring the kids to scaring the politicians.”

When discussing gender diversity, Wu noted that although 30 percent of entrepreneurs are women, they only attract two percent of venture capital. “Diversity of lived experience drives diversity of thought. That is incredibly powerful when it comes to inventing new solutions,” he said. He pointed out that MaRS supports women entrepreneurs through such initiatives as the RBC Women in Cleantech Accelerator. “Gender diversity is something that we desperately need to inject into our innovation process,” he said. “How can we actually invent the world of the future when the fuel that drives that is talent — and we’re leaving half the talent sitting on the sidelines? That doesn’t add up.”

In the U.S., women’s rights are threatened

Speaking four days before the U.S. supreme court ended the constitutional right to an abortion in America, Atwood voiced her opinion the on impending ruling. She pointed out that the leaked draft opinion was based on originalism, a philosophy that the U.S. constitution should be interpreted as it was understood at the time it was written. “Well, the original U.S. constitution did not include votes for women,” said Atwood. “So, if you really want to be an originalist and you’re a female Republican voter, I would think twice about that.”

When it comes to creating change, Atwood said, you have to start with what people do every day:  the kind of houses they live in, where they get food, what energy sources they use and the kind of clothing they wear. Solutions have to be carbon neutral or negative, as well as scalable, affordable and attractive enough that people will actually use them. “You can’t say you have to dress in old flour sacks and eat nothing but tofu, because people will not do that,” she said.

Atwood is currently working on a project with Disco called Practical Utopias, an interactive course where teams of change makers put their heads together. “Like building a Lego game, they’ll take building blocks of raw resources that are already available to us now and try to build an improved way of living,” Atwood explained. “I’ve been amazed to discover all of the thinking and all of the solutions that are already there,” she added.

Want to list your event on our calendar? Submit your tech event here.

Get the latest tech events delivered to your inbox.