Advancing the role of women in the green economy 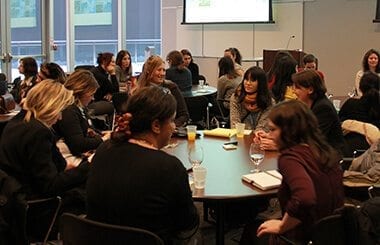 Women make up half of the professional workforce, yet only 18% of women hold top leadership positions and only 1.3% of women are founding startups. Not to mention the fact that women earn only 77 cents to a man’s dollar.

These are just some of the statistics that were shared with Women in Renewable Energy (WiRE) in a breakout session as part of the organization’s visit to MaRS and the cleantech practice this past Tuesday. 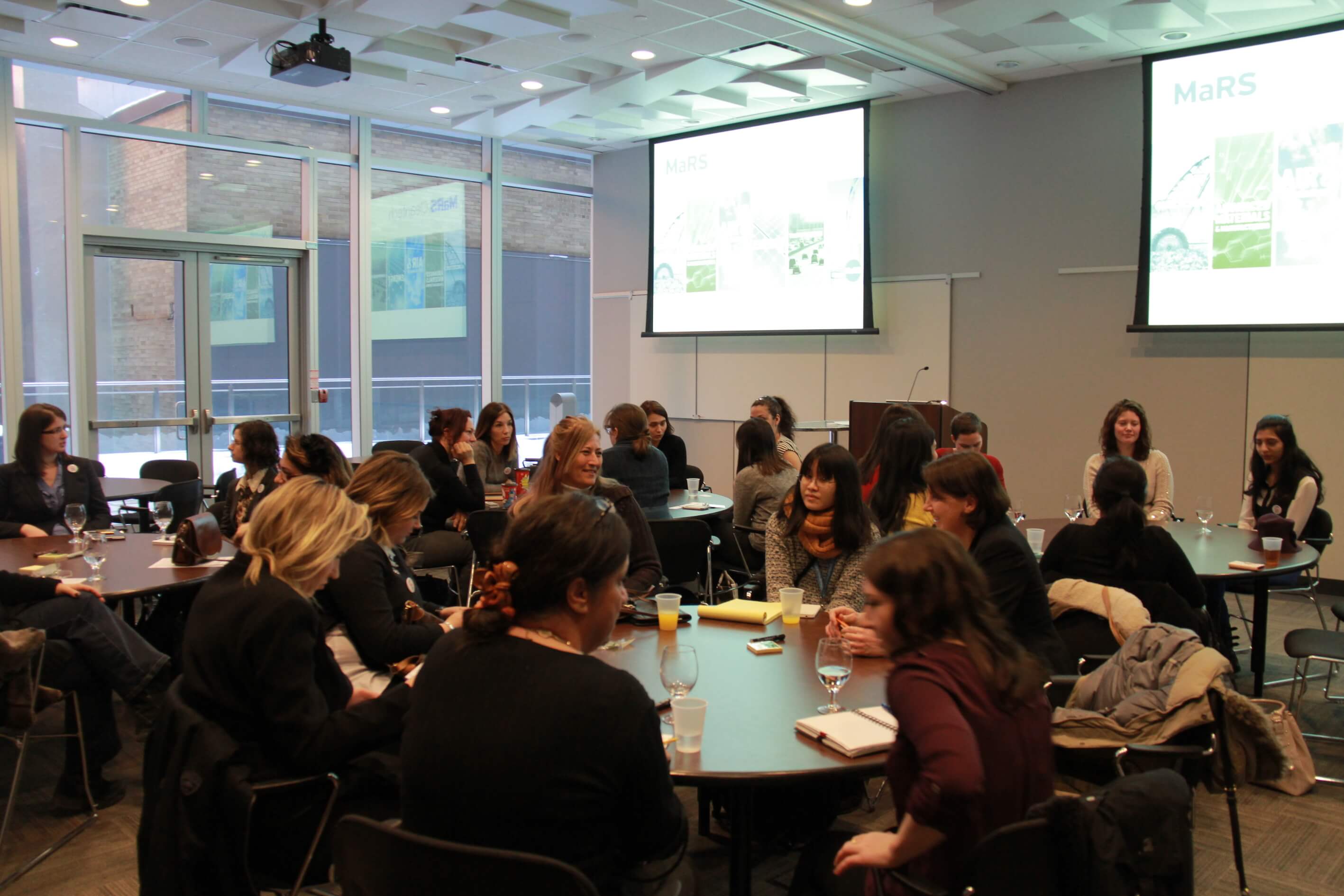 WiRE educates and connects with women in the energy space in Ontario with the goal of increasing women’s literacy across a wide range of applications related to renewable energy. The non-profit organization offers a platform for learning and networking in the hopes of enabling women to advance their careers in the energy industry in Ontario. It is in this light that WiRE joined MaRS in a conversation about the status of women in entrepreneurship and the tech sector. 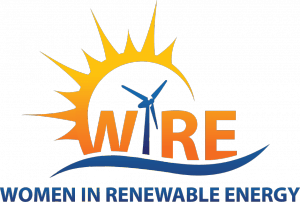 Here are some of the questions we touched upon.

Progress has been and is continuing to be made. Women now hold more bachelor’s degrees than men in both Canada and the United States. However, in the US women make up only 24% of science, technology, engineering and math (STEM) undergraduate students, 18.4% of engineering students and 18.2% of computer science students. A similar structure is reflected in the workforce. Today, women make up only 24% of the Canadian tech-sector workforce and only 27% of the Canadian emerging technology workforce. Clearly, more progress is needed.

When do women get involved in startups?

According to a Dow Jones VentureSource study titled “Women at the Wheel: Do Female Executives Drive Start-Up Success?” only 1.3% of privately held companies had a female founder, only 6.5% had a female CEO and only 20% had one or more female C-level executives. Another insight from the report is that while women may not often be founders of startups, they are often involved when companies are profitable. Companies that have one or more female executive leaders are more likely to fall into the profitable category than companies with no female leadership. According to the study, 66% of profitable startups have at least one female executive on board (see table below). This could imply several possibilities: that companies hire more female executives as they advance; that women are more likely to join a startup if they feel it will be a success; and/or that women leadership is behind this success. Be sure to read the report for more interesting analysis.

Last year, MaRS Data Catalyst conducted some research into the status of women in venture capital in Canada. They found that 63% of venture capital firms in Canada had no female executives.

In the US, National Venture Capital Association and Dow Jones VentureSource found that women make up 21% of the venture capital industry and 11% of actual investors. With cleantech investors they found the numbers for women to be a bit higher, at 15%. In comparison, while MaRS Data Catalyst did not break the numbers down by practice, they found that the overall number of women who are actual investors is slightly higher than the Dow Jones sample, at close to 15%. (You can read a summary of the Data Catalyst research here.)

We are the change

The participants of the WiRE field trip to MaRS filled Post-it notes with their thoughts about what can be done to change the status quo. Here are some of their ideas. 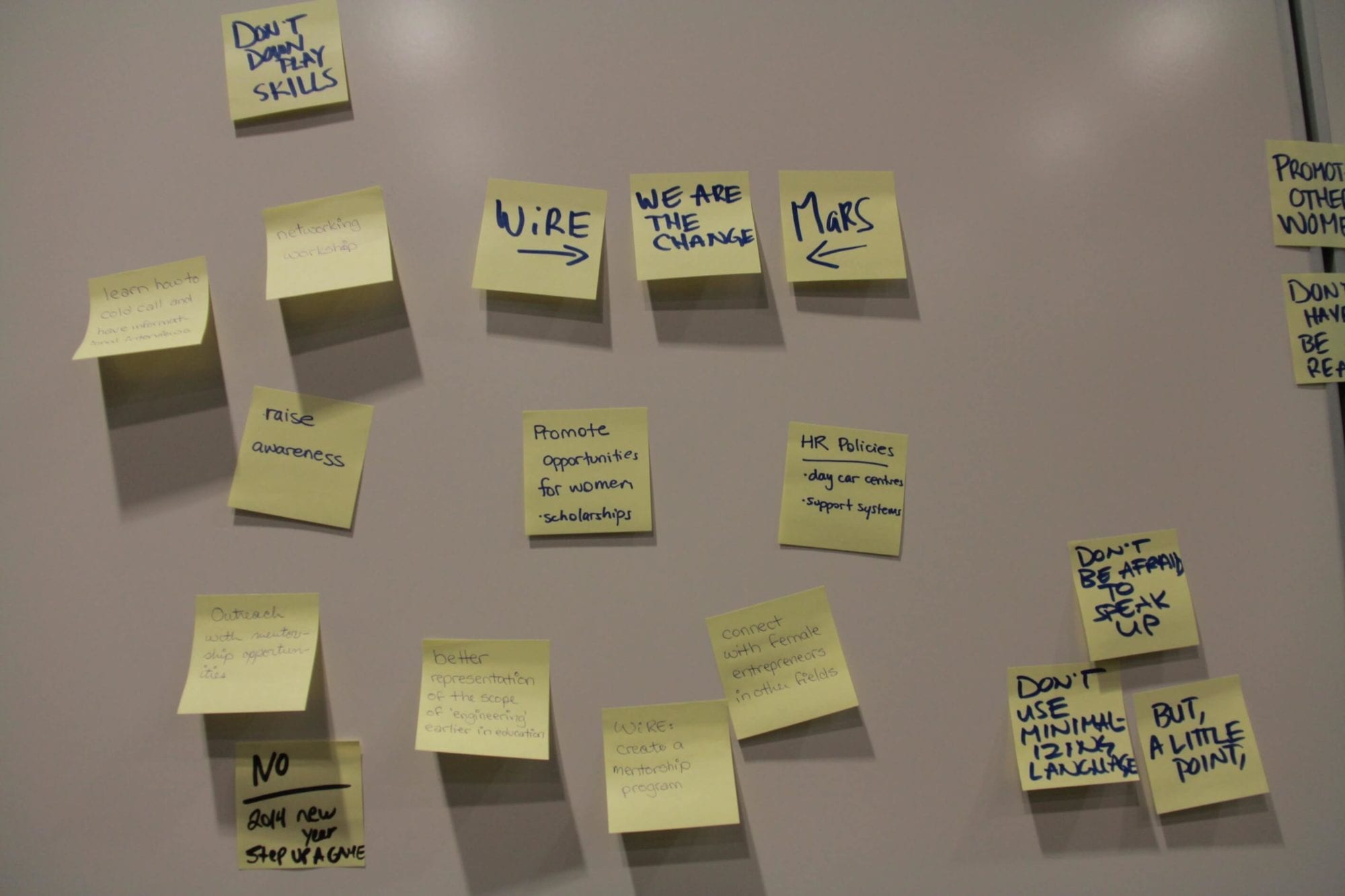 The WiRE women and participating MaRS clients convinced me that tomorrow I should speak up, play up my skills and be a presence.