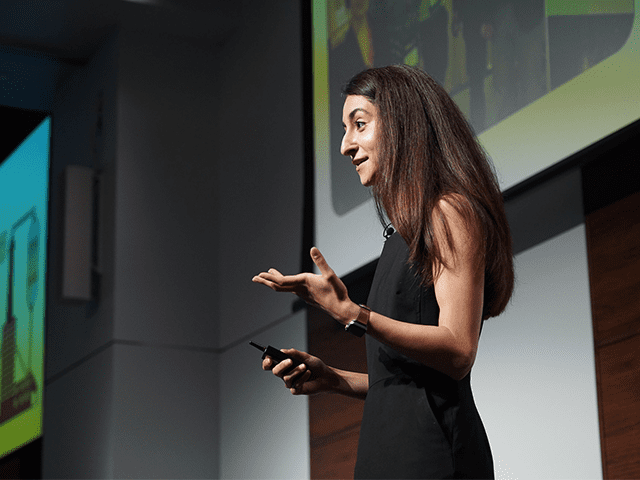 Over the coming months, MaRS will showcase each of the incredible finalists from our Women in Cleantech Challenge. In this installment, we profile finalist Alexandra Tavasoli.

When most people think of clean energy, they might picture gleaming solar plants or sleek electric cars. But not PhD candidate and Solistra CEO Alexandra Tavasoli.

“I really think [that’s] the best solution, because it’s addressing a segment of greenhouse gas emissions that aren’t addressed by any other technology.”

Based on her research into nanonstructured light-activated materials known as “photocatalysts,” Tavasoli has developed a technology that converts waste CO2 and methane from factories into usable fuels and products, using only sunlight.

“We’ve designed a modular reactor system that can either be a standalone plant, or directly augment onto existing infrastructure, so that we don’t have to close down our major economic centers and manufacturing plants,” Tavasoli told a panel of clean technology, business and environmental experts at the Women in Cleantech pitch competition last September.

The panel was wowed by Tavasoli’s pitch. As one of the competition’s six finalists, she’ll receive an annual $115,000 stipend for two-and-a-half years, access to a federal lab, and the chance to win another $1 million in funding during the final phase of the competition in 2021.

Tavasoli says she’s excited to develop her technology in a federal lab, and that Solistra’s photocatalysts could see implementation on an industrial scale as early as 2022.

“I am really passionate about getting young engineering students excited about the big ‘ugly’ factories that they might see on the side of the highway, and know that that is within their reach to change,” Tavasoli told Natural Resources Canada in September.

“I’d really like to see everybody understand the necessity of those big operations simultaneously with the notion that collectively we can clean up those processes.”

Visit the Women in Cleantech Challenge website to learn more about our finalists.