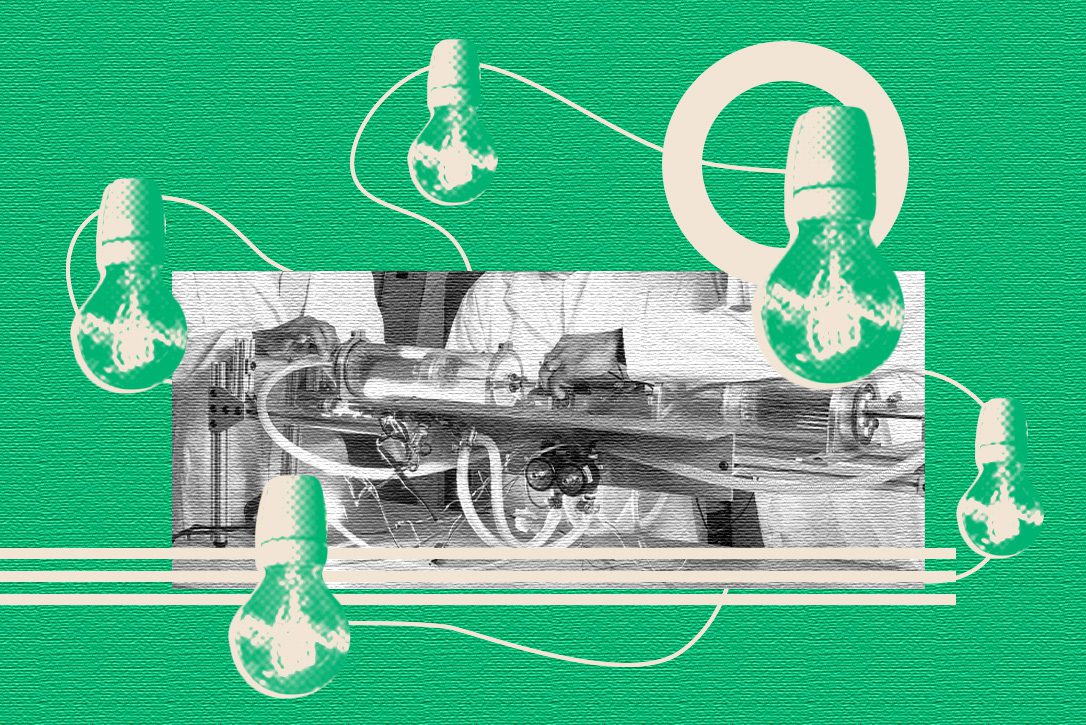 All over the world, every second of the day, and every time fossil fuels are burned, a massive amount of heat is generated and ultimately pumped, unused, into the atmosphere. You can see it in the steam spouting from power plants, feel it at the back of the fridge, practically watch it radiate off your overworked laptop. By some estimates, up to 65 percent of the energy we consume is lost in the form of low-grade waste heat. Traditionally, such heat is unusable, and most industries use liquids, air-conditioning or dry chillers to expel it.

At a time when we need to get much better at using all the energy we have, such processes seem both backwards and, well, wasteful.

But what if that heat, all those many gigawatts of squandered energy, could be captured and converted into something useful — like emissions-free electricity? That’s the alchemical vision of Extract Energy, the Cambridge, Ont.-based spinoff of Smarter Alloys Inc. Its ingenious heat engine transforms low-grade waste heat into power. Whether hooked up to a distillery or a data centre, it can provide clean electricity, reduce cooling costs, and substantially curb greenhouse-gas (GHG) emissions.

Other technologies already harvest heat, most famously Rankine engines, which have been used in European power plants for over a decade. But Extract Energy CEO Ibraheem Khan claims that at scale, his heat engine will produce electricity far more cheaply and reduce even more emissions. There are approximately 68 terawatt-hours of untapped energy in waste heat produced globally every year, Khan says. He has ambitions to reach 25 percent of that market.

“Our target market-adoption rate is pretty aggressive,” he says. Assuming that adoption rate is achieved, by 2050 Khan estimates his company will be able to reduce GHG emissions by an astounding five gigatons a year, roughly 14 percent of annual global emissions.

“The global demand for energy is booming,” argues journalist Nicola Jones in Yale Environment 360, a publication of the Yale School of the Environment. “And every bit of waste heat recycled into energy saves some fuel — often fossil fuels — from doing the same job.”

At the core of Extract Energy’s engine are unique alloys — chief among them a blend of nickel and titanium called Nitinol — which are processed to optimize their power output. These so-called shape-memory alloys are super-elastic and endlessly mutable: once bent or manipulated they will return to their original shape when heated.

Describing such high-tech material is tricky, but think of fresh pasta softening as it sits in boiling water. Only here, the process goes in reverse, with individual sections of the pasta able to then be shaped in different ways and exert a tremendous amount of force. Extract Energy uses wires or springs made of Nitinol (and other proprietary alloys) that can be “programmed” by high-powered laser pulses to expand and contract when immersed in and removed from warm liquid. The springs or wires convert that heat to kinetic motion that then drives a generator. The amount of force that those alloys create is mind-boggling — spill some hot coffee, say, on a single spring small enough to fit in your hand and it can produce enough power to lift a train car.

The 39-year-old Khan, a materials engineer, conceived of this technology while working on his PhD at the University of Waterloo. Playing around with Nitinol one evening in 2009, he noticed that the material could be reshaped at different temperatures and also remember those different shapes. At first, Khan thought there was a defect in the material, but after a few weeks, the impact of the discovery hit him. “I realized that we could take a material, give it the ability to morph into multiple different shapes, and make it essentially function like a machine,” Khan says. Not wanting this discovery to simply end up buried in an academic paper, he set out to develop commercial applications for it, co-founding Smarter Alloys in 2010.

Khan’s wife is a dentist, and the first application he developed was a precisely tuned archwire for braces that applied specific pressure to individual teeth. Over time, the company also created applications for the medical, automotive, aeronautics and climate-tech industries.

This past January, Smarter Alloys moved into a sprawling complex in a Cambridge industrial park. While its office spaces still feel a bit unfinished, the real action happens in the back of the building, in the labs and manufacturing areas that house many specialized devices: electron microscopes, electrical discharge machines, differential scanning calorimeters. A large boiler and dry chiller, designed to mimic the operations of an industrial plant, occupies a significant part of a roomy, high-ceilinged garage.

Outside, amid a graveyard of abandoned machinery and materials, sits the first Extract Energy prototype. It was first successfully used in an industrial trial at Calgary’s Last Spike Brewery, where wastewater from the beer-making process was used to generate electricity (it was able to produce peak powers of 500 watts). It was a surprisingly humble hunk of metal, Plexiglas, gears and belts, about the size of a tandem bicycle. At either end, rows of alloy coils were visible, looking not unlike the springs you might see in a carburetor.

Inside the garage, however, is a far more formidable version of the same heat engine, still under construction. Its load frame, when finished, will hold enough alloy wires to produce 100 kilowatts of power. “We’re setting our sights toward megawatts of power,” Khan says. “Which is really going to be impactful.”

The applications for Extract Energy, Khan argues, are “endless,” but from an environmental perspective, he is focusing on a few different areas, including geothermal energy and data centres. For example, the endless geothermal heat found in orphaned oil wells (created by radioactive decay in the earth), could theoretically be tapped forever. In a fossil fuel-free future, power plants might be located beside or on top of these holes.

Conventional data centres, meanwhile, are, in Khan’s words, “literally massive glorified heaters.” Little of the energy in them is actually used for computing, and the rest is waste heat, with such companies as Amazon using yet more energy to cool and move that heat.

Smarter Alloys has partnered with another cutting-edge startup, Calgary-based Denvr Dataworks, which has completely reimagined the data centre. The two centres that Denvr is currently building are compact, modular spaces densely packed with extremely fast, energy-efficient computers, all cooled using mineral oil rather than typical air conditioning. Denvr will power its data centres with renewable energy, and that hot mineral oil will feed directly into the Extract Energy heat engine, whose electricity will then flow back into the data centre.

“Our goal with Smarter Alloys is that we’re going to have a data centre in early 2022 where the operations will be carbon neutral,” says Denvr CEO David King. “It’ll be, as far as we know, the world’s first.” King contends that his firm is about five years ahead of the curve in terms of its technology, but that all other data centres will have to follow suit. While larger corporations typically are more hesitant to try new technologies, this method of capturing waste heat would go a long way in helping multinationals meet net-zero commitments.

“We absolutely believe this will become the standard within a decade,” King says. “Once your heat is liquid, you can do stuff with it. We could heat a greenhouse. When it’s air, you’re just blowing heat out the chimney and you’re killing the planet.”

Khan echoes this sentiment when he talks about what motivates him and his company. Even with all the various innovations and products Smarter Alloys has created and are in the pipeline, about 80 percent of its resources and brainpower are devoted to Extract Energy and its potential environmental impact.

“You kind of work for your kids,” Khan says. “If we can apply this science to one of the biggest problems we have on Earth, it’s going to be the most impactful thing we can do for our children and their children. This is a way to help reduce the risk of climate change that they’ll experience.”

Extract Energy is one of the 10 Mission from MaRS Climate Champions. Together, these Canadian companies have the potential to reduce CO2 emissions by 42 megatons by 2030. Learn more.