B Corp hits a Canadian milestone 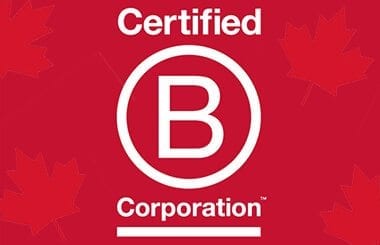 There’s nothing like waiting until the very last minute to check off that final to-do on your 2013 new year’s resolutions list. For 2013, the B Corp team within the MaRS Centre for Impact Investing had committed to seeing the total number of Canadian B Corp certifications reach the century mark and, evidently, we paced ourselves perfectly.

Starting things off early with the certification of MaRS client ChangeIt and wrapping things up with a flurry of activity on December 31, 2013, we saw the total number of Canadian B Corps grow by nearly 65% in 2013 (from 61 to 100) and stretch across Canada from east to west, with representation now hailing from Nova Scotia, Quebec, Ontario, Manitoba, Alberta and British Columbia. These 100 Canadian B Corps represent over 10% of the 910 global B Corps across 60 industries in 29 countries and they’re currently the largest cluster outside of the United States.

Joyce Sou, MaRS CII’s benefit corporation manager, remembers her first Greater Toronto Area B Corp gathering in 2011. “We could all fit around a table at Mercatto,” she says.

On the occasion of passing the 100 mark, Joyce reflected on being inspired by the new members and the continued passion behind the B Corp movement. “In the next few years, I believe we will see more of the unusual suspects join in the conversation of doing well by doing good.”

Barry Martin, principal of Hypenotic, a founding Canadian B Corp, was around the restaurant table with Joyce in 2011. His reflection has really helped to put this milestone in perspective: “When there’s one of you, you’re an anomaly. When there are 10 of you, you’re the fringe. When you get to a hundred companies, you’re into movement territory,” he says.

“In hindsight, all the best ideas seem obvious, but it takes enough people working together to make new ideas first visible and then commonplace. I’m really excited about the momentum that the idea of B Corp has garnered and am seriously looking forward to what we can do as we build a critical mass. Imagine a business lobby of organizations that include metrics for the long-term benefit of their community, ecology and economy. It’s an increasingly closer reality.”

“Becoming a better and more responsible business is a process. Even an ocean of goodwill is not enough. By becoming a B Corp we are challenging ourselves and the world to judge us by a higher standard.”
— Ran Goel, Fresh City Farms

“It’s simply not enough to say you’re a ‘good’ company. There must be accountability.”
— Ryan Taylor, Fair Trade Jewellery Co.

“Business has a duty to respond creatively to social and environmental challenges.”
— Andrew Boardman, Manoverboard

“B Corp certification is about making a public commitment to maintaining our high ethical standards and to being open and honest with the people in our communities who buy our beer.”
— Steve Beauchesne, Beau’s All Natural Brewing Co.

“The [B Corp] designation provides companies with access to a community of like-minded organizations in their own industry and others. It creates opportunities for positive partnerships and the chance to be a part of a growing movement in redefining success in business.”
— Mike Winterfield, Traction On Demand

In 2014, the MaRS Centre for Impact Investing will continue to work with executives, owners, employees, shareholders, pensioners, voters, taxpayers and governments to demand quantifiable measures like B Corp certification and then build, hire, apply, trade, invest, advocate and buy accordingly. Together, we will redefine success in business.

Interested in learning more about B Corps and impact investing?