Build with purpose: A snippet of the Wattpad story 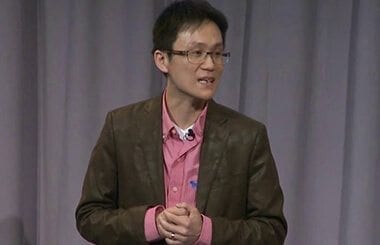 This past Wednesday, Allen Lau, co-founder and CEO of Wattpad, both challenged and inspired the Entrepreneurship 101 audience with his story and admonition to build with purpose. In his lecture, Allen placed particular emphasis on the following three ideas.

Wattpad has come a long way over the past several years.

In fact, Allen has been building out the company since 2002, when he started developing a mobile reading application on an old grey-scale Java phone with a display capacity of five lines of text. Since then, the company has faced several obstacles, including young markets that were not ready for its product, bad press around facilitating copyright infringement and months where it only made $2 in revenue.

The company name has also changed a few times to improve its visibility to the market. (Fun fact: The co-founders chose a company name with only two syllables to make it easier for non-English speakers to pronounce. This is not an uncommon tactic among popular tech firms.)

It’s been a long journey, but the effort has paid off. In Allen’s words: “The more effort you put into your company, the better the results you will see.” He also told the Entrepreneurship 101 attendees that “iterating should not be confused with building a long-lasting company.”

How and why did Allen and his co-founder, Ivan Yuen, keep going with Wattpad over the years?

Well, first, they were visionary. Allen and Ivan had a vision of what the level of mobile use (mobile is where they started) would be in the international market in 10 to 15 years. Second, they kept going because it was affordable to do so. Their hosting costs were only about $5 per month. Finally, they were practical. When Wattpad wasn’t gaining enough traction they put it on the backburner and worked on another business idea for a while. That company took off and was eventually acquired.

Being realistic about their priorities allowed Allen and Ivan to pay their bills while also allowing Wattpad to grow in the background. While the other company’s acquisition was in process, they made use of the waiting time to work on Wattpad.

Throughout it all, they did what any smart entrepreneur would do—they kept costs “cheap and cheerful.” For example, they hired first-year co-op students because they couldn’t afford to pay full-time staff or interns.

Don’t get it twisted though: money was also a motivating factor. In fact, Allen was originally “in it” simply to make money. However, when questioning whether or not it really made sense to keep going with Wattpad, he received an email that changed his perspective. Allen received an email from a woman whose daughter was dyslexic and struggled to read books, telling him how Wattpad and its annual writing competition had changed her daughter’s life.

“Purpose will keep you going during the difficult times,” he says. Eighteen million users later, Allen has demonstrated that it certainly will.

Recently at a Wattpad UK event, a young man from Hackney, one of the most depressed communities in England, told Allen how he had been convinced he would grow up to live his life as a gangster. However, becoming part of the Wattpad community has changed his life and his perception of who he can become. That young man has now gone on to university to study political science. As any entrepreneur will tell you, you may not get to hear heart-warming stories like these ones every day—but when you do, it keeps you going a little bit longer. For more entrepreneurial wisdom and inspiration, check out Allen’s lecture video.

Next lecture: Customer Discovery and Market Intelligence on Wednesday, January 15, 2014.