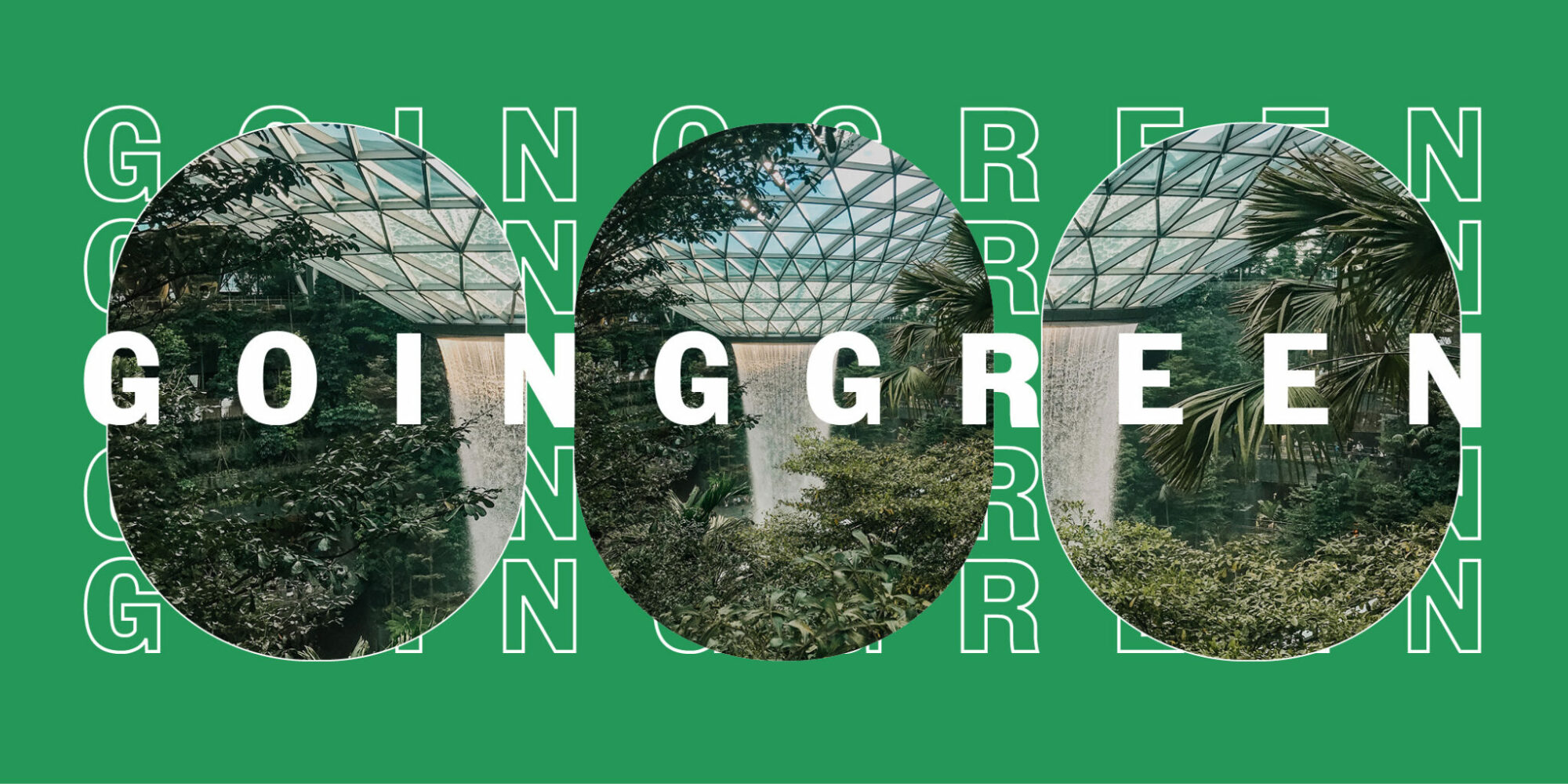 From cleaner jet fuels to electrifying airport vehicles, the aviation industry is exploring ways to cut its emissions.

Up to 70 times a week for the past five years, a robotic bird has taken to the skies over the Edmonton International Airport. Designed to look like a predatory falcon — it even has wings that flap — the drone has proved itself as a humane method of chasing other birds away, keeping them far from the flight path of planes. These days, as the robo-bird performs its patrols, it flies over stands of hemp planted on the airfield specifically to sequester carbon dioxide, as well as a prototype electric-powered aircraft de-icing vehicle that saves 35 tonnes of carbon emissions annually. And in the coming months, it will also soar over the construction site of the world’s largest airport solar farm, which, when complete, will produce electricity to power 28,000 homes.

These initiatives are part of a broad push by the aviation industry, which produces an unsightly 2.5 per cent of global carbon emissions, to green its operations. Most of those emissions result from burning aviation fuel, but the sector’s impact — and potential for change — goes far beyond the exhaust fumes. Airports occupy vast amounts of land, operate cavernous terminal buildings and house hundreds of organizations that do everything from selling designer handbags to maintaining aircraft.

While there is plenty of scope for environmental initiatives at airports themselves, Myron Keehn, a vice-president at Edmonton International, believes their potential to improve sustainability doesn’t end at the perimeter fence. Airports sit at the centre of an “ecosystem cluster” of supporting business and transportation providers which, according to Keehn, positions them well to trial new innovations and stoke demand for cleaner technologies. “After safety and security, our job is to drive regional economic prosperity in a sustainable way,” he says.

Here are five of the biggest ways airports are going green:

Alternative fuels derived from organic materials like algae, corn, switchgrass and animal fats are ready to be dropped into existing jet tanks. These fuels have been tested by international carriers, including Air Canada, which used them on four flights to mark Earth Day in April. Sustainable aviation fuels can already replace half a tank of jet fuel, and the expectation is that this will grow to 100 percent in short order, reducing aviation emissions by as much as 80 percent.

The obstacles are scale and cost — it isn’t easy to source the feedstocks and only a handful of production facilities exist around the world. San Francisco International recently described its efforts to develop its sustainable fuel offerings in partnership with 150 stakeholders: “The infrastructure and supply-chain logistics (have been) a significant barrier,” it reported, noting a $1-billion infrastructure shortfall.

Government subsidies may be required to bridge the gaps, but one Canadian effort is already under way to address these feedstock and production issues. Carbon Engineering, a start-up based in Squamish, B.C., is exploring ways to capture carbon from the air and use it to make fuel — essentially turning emissions into a closed loop. It counts Airbus and Air Canada among its investors and partners and has begun planning large-scale production facilities for aviation fuel in Scotland and British Columbia.

The energy required to run airport terminals, offices and other spaces is enormous — consuming 10 to 15 percent of a typical airport budget, by some estimates. So, airports are looking to find ways to generate and save energy. Abu Dhabi airport is turning to people power. It has installed a stretch of flooring made by British company Pavegen that creates electricity every time someone walks over it. The technology was designed for places like transport hubs that have millions of passengers whose feet are pounding the flooring, and it can generate enough energy to power lights. In Oslo, the airport has started storing the snow that falls over winter in a vast depot covered in sawdust to stop it melting. Using a heat exchanger, the snow is used to cool parts of the terminal buildings on warm days. (For good measure, Oslo is also testing self-driving snowplows, which may enable it to use fewer vehicles and reduce emissions.)

Meanwhile, during COVID, Pearson airport used the opportunity of the pandemic travel shutdown to replace more than 2,000 halogen bulbs around its runways, taxiways and aprons with environmentally friendly LEDs. Last year, it also began adding electric boilers to Terminal 1, which will be used to preheat the terminal at night. This “will save us a couple of thousand tonnes of emissions every year,” says Todd Ernst, the airport’s director of aviation infrastructure, energy and environment. Longer term, the airport aims to replace its natural-gas boilers with low-carbon systems such as heat pumps operating in combination with electric boilers running on clean electricity.

Airports operate fleets of vehicles that can’t be easily electrified. Machines such as the 10-metre-wide plows that clear airport runways in winter are too large and heavy to operate using batteries — which don’t work well in frigid temperatures anyway. Many airports are eyeing hydrogen, which burns with no emissions, as an alternative.

In April, Edmonton International agreed to work with Hydra Energy, another B.C.-based company, to retrofit some of its fleet of airside vehicles to run on both hydrogen and diesel. This is expected to reduce diesel consumption and carbon emissions by more than 40 percent.

The move is part of the airport’s support for Edmonton Region Hydrogen Hub, an initiative to accelerate the use of the fuel in places such as transit networks, home heating and farming.

Keehn says that airports are excellent locations to start building out the infrastructure necessary to make hydrogen fuel viable. “Airports are gathering places. A lot of our vehicles don’t travel great distances. Even the majority of taxis stay within 100 kilometres of the airport. So, it’s a good way to adopt hydrogen without having to build 50 stations.”

Pearson is evaluating concepts for a facility that would use low-emission energy sources, such as solar energy and off-peak nuclear power, to produce hydrogen fuel. “We’re anticipating a bunch of small- to medium-size businesses in our surrounding employment zone could be potential customers,” says Ernst.

If you’ve ever spotted a cherry picker de-icing your plane with heated glycol on a cold winter day, you’ve invariably hoped that the maintenance crew wouldn’t scrimp. But when leftover glycol (a type of alcohol) falls to the ground, it stops being helpful and starts becoming a water pollution issue. Airports are now using smarter technology to monitor, capture and treat this and other pollutants.

This process is critically important for facilities like Vancouver International, which is bounded by the Strait of Georgia and the Fraser River estuary. Vancouver upgraded its de-icing pads in 2020 to ensure glycol containment and maintain its Salmon Safe designation from the Fraser Basin Council and Indigenous assessors.

But it’s an issue for airports across the country, including Edmonton International, which ran a pilot project with Calgary start-up Swirltex, installing next-generation filtration membranes to reduce energy use and treat wastewater more efficiently. At Pearson, the entire central de-icing facility is wrapped in high-density liners, and a company called Inland processes excess glycol for recycling and resale as, for instance, wiper fluid for cars. Pearson’s stormwater facilities also collect runoff from across the airport and divert it for further treatment when it sees spikes of glycol or other contaminants.

Pearson has purchased two battery electric airside buses and is looking to expand, while it also considers hydrogen. Calgary International has 20 electric buses. Winnipeg’s Richardson International runs one as a public shuttle to the city centre. And Vancouver International is working toward electrifying 50 percent of its ground fleet.

Most airports are located at the confluence of major highways and employment areas, making them good spots for public charging stations. Pearson has 32 publicly available chargers, a further 15 at its valet parking and 85 for its ground support equipment. Other Canadian airports are following suit, including Vancouver (60 stations), Montreal-Trudeau (46) and Saint John and Halifax (1 each).

As a whole, Canadian airports’ efforts to go electric have run the gamut from “ambitious to uninspired,” according to a 2019 Electric Autonomy report. But between airports’ own sustainability goals and government initiatives to subsidize EV charging infrastructure, these numbers are only likely to grow.

Leave the smartphone at home: How new technologies could usher in a device-free future