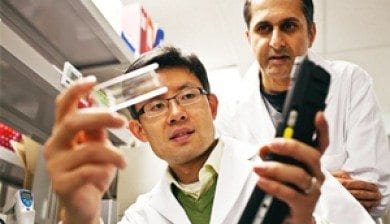 The global crisis of Ebola, with its reach from Africa to North America, and the amazing things that Canadian companies such as PlantForm and Chematria are trying to do to combat the disease, have got us thinking about some of the other remarkable solutions Canadians are creating for international markets. I’d like to highlight two stellar Toronto startups that are working on solutions to ease access to diagnosis for patient groups suffering from sexually transmitted infections (STIs) in two very different markets.

Before he became the CEO of ChipCare Corporation, James Fraser worked with Doctors Without Borders for nearly seven years and co-founded the medical research NGO Dignitas International, which he ran for 10 years. Dignitas aimed to decentralize access to HIV treatment in the communities of low- and middle-income countries, like Malawi. Joining the ChipCare team that set out to develop a portable blood diagnostic device to be used by physicians in rural areas to inform patients when to seek treatment for HIV was a natural next course.

ChipCare was founded in 2009 by James Dou, Stewart Aitchison and Rakesh Nayyar. Working with bioanalytical chemist Lu Chen, the company is developing technology that counts the number of CD4 cells—also known as T-helper cells—in a pinprick sample of blood, which helps determine a patient’s stage of HIV. CD4 cells are a type of white blood cell that fights bacterial and viral infections. CD4 cell counts in HIV patients are low and many of the characteristic complications manifest as a result, leading to AIDS.

ChipCare’s portable test will allow community healthcare providers in low-income countries to diagnose and monitor a patient’s level of white blood cells over time to see if his or her immune system is getting stronger or weaker. Currently, in many low- and middle-income settings, patients must walk great distances to reach the nearest health centre for a blood test. The blood test sample is then sent to a central lab for analysis—a process that can take weeks—and often gets spoiled or lost in transit. After analysis, the patient must return to the clinic again for his or her results and—hopefully—treatment. Often patients do not return. ChipCare’s blood-testing platform provides remote doctors with on-the-spot actionable diagnostic information and can instruct on-site nurses to start treatment right away if their patients’ CD4 cell counts are below the threshold.

On the patient level, ChipCare’s solution will reduce morbidity and mortality by improving access to diagnostic testing of HIV and offering better care in places that do not have ready access to a central lab. This includes low- and middle-income countries, as well as remote areas in North America. On a systems level, the data collected in aggregate can be used by governments in their policy-making to ensure that adequate treatment is available in communities based on reported needs. ChipCare’s second generation tests will expand to include other STIs and anti-natal screening that would be useful in both low- and middle-income North America and Western Europe.

Eve Medical: Empowering women to self-screen for their own health

Jessica Ching is an industrial design graduate from OCAD University with a passion for using design to enhance user experience and compliance in healthcare. While completing her degree she designed the first prototype of HerSwab, a medical device that makes it easy for women to collect their own samples to screen for human papillomavirus (HPV), a virus that causes cervical cancer and other STIs. In 2010 she co-founded Eve Medical with Evan Moses to commercialize the product.

The HerSwab technology was designed together with women and doctors to ensure a simple, user-friendly process that produces high-quality samples. HerSwab makes the HPV screening process more comfortable and accessible for women who have limited or no access to a clinic.

According to the World Health Organization, approximately 274,000 women die every year from cervical cancer. The majority of these deaths occur in under-screened women. Many women do not get tested for HPV because they either do not have the time, lack access to a doctor, find the test embarrassing or uncomfortable, or are inhibited culturally. Roughly one-third of women in Canada and other developed countries have either never screened for HPV or do not screen on a regular basis.

Cervical cancer is a preventable disease if detected and treated early, but regular screening is critical for timely prevention. One current method used to reach women to raise awareness about HPV screening is to send a letter in the mail reminding them to get checked for the virus at their nearest clinic. Early studies show that self-sampling at home makes women three to five times more likely to comply when compared to an invitation letter for a clinic visit.

HerSwab launched in Europe this past summer and Eve Medical has since begun pilots with customers in Slovenia, Scotland, the United Kingdom and Italy. Eve Medical is focusing initially on European countries due to lower regulatory barriers and a faster adoption of HPV testing as primary screening compared to North American countries.

Eve Medical sets out to save the lives of our mothers, sisters and daughters by making HPV diagnosis and care more accessible and patient friendly. In the next five years, Eve Medical aims to empower one million previously non-screening women to take charge of their own health and to test themselves.

Both ChipCare and Eve Medical are targeting international markets with their globally relevant technologies, albeit to reach target populations and/or for regulatory reasons. With no shortage of STIs and the need for regular testing in North America, we would be lucky for both devices to return home to provide our rural communities and socially embarrassed, culturally inhibited or simply busy men and women with access to better healthcare.