The changing face of disability in a digital world 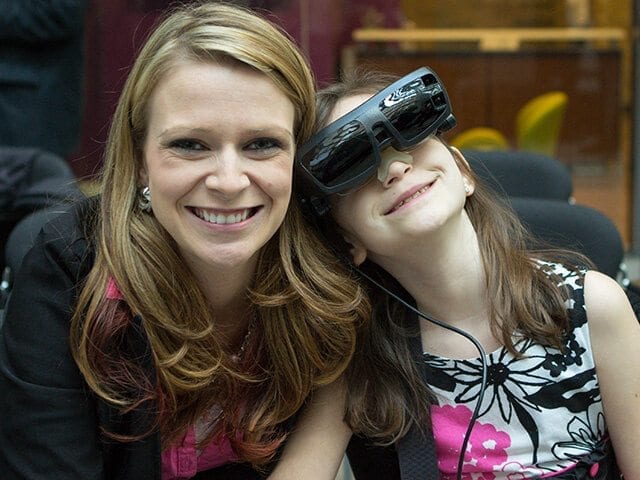 There are 3.8 million working-age Canadians living with a disability, a number that will likely increase because of our aging population. More and more people will soon rely on technology for managing life with a disability, and three MaRS startups are working to fulfill this growing need.

Enabling the legally blind to see

Imagine not knowing what your family members’ faces look like and suddenly being able to see them clearly. That’s the reality for legally blind users of eSight, a breakthrough in intelligent eyewear. Using eSight glasses, people with low vision are able to read books, cook, watch movies and see facial expressions, when before it was too blurry to be possible.

eSight works by projecting a real-time image onto video OLED screens using a high-speed camera, patented video processing software and a computer processor. According to the company, “eSight’s components work in tandem with the user to enhance the quality of an image reaching the eye, delivering more data and triggering an increased reaction from the cells in the eye.”

eSight launched last October and has already made a big impact. Watch the video below to see the difference the technology has made in users’ lives.

Pressure ulcers (commonly known as bedsores) can be devastating for wheelchair users. People can get pressure ulcers when they’ve been sitting the same way for too long and the blood flow to soft tissue is blocked. They can cause complications such as sepsis, cellulitis, bone and joint infections, and cancer, and can even lead to death.

Able-bodied people don’t get pressure ulcers because the body naturally adjusts, moves and fidgets when it has been sitting for too long—it’s first nature, almost like breathing.

Many wheelchair users don’t have these natural impulses because they’ve lost sensation in that area of their body, and so they must make a conscious effort to shift positions. Until now, this was the only method for wheelchair users to prevent bedsores.

Sensimat Systems, a MaRS health client, has developed a high-tech solution: a sensor mat that zips into the wheelchair seat and wirelessly connects to the user’s smartphone. The mat alerts the wheelchair user when it’s time to change positions, using technology that senses pressure buildup.

“It’s like a Fitbit, but for seating,” says David Mravyan, co-founder of Sensimat. The mat tracks the user’s goals and performance and collects data, allowing the user to analyze his or her patterns and adjust accordingly.

Sensimat is trying to solve a major health issue as well as an economic burden. Pressure ulcers have a surprisingly large impact on Canada’s healthcare system, costing about $2.1 billion per year. The cost is even greater in the United States, where around $9 to $11 billion is spent and more than 17,000 lawsuits are filed per year over pressure sores.

“In the States, pressure ulcers are on a list where certain insurance companies won’t cover it since it’s considered preventable,” explains David, adding that hospitals can sometimes be found negligent for not preventing the sores. This is part of the reason why Sensimat data can be shared with the user’s healthcare providers: so that they can ensure their patients are doing their adjustments and doing them correctly.

Sensimat is working on expanding its technology to hospital beds, where bed-ridden patients are on a “turning” schedule for preventing pressure ulcers. David also sees potential uses for able-bodied people, such as car seats and office chairs.

Helping quadriplegics use smartphones and tablets

Smart devices have opened up all kinds of possibilities for people with disabilities, from voice-activated controls to dictation technology—that is, if they can touch the screen.

That’s the problem that many people with limited mobility, including quadriplegics, face when using smartphones and tablets. When you can’t use your hands, your options are limited. You might think voice controls cover all of the bases, but even Siri falls short.

Enter the Tecla Shield, an assistive device for smartphones and tablets that connects to the controls on a user’s wheelchair to allow for easy use of his or her devices.

With the Tecla Shield, users can do things they couldn’t before, such as send messages, read e-books, browse online, make phone calls and use social media.

The technology has a great impact on their lives, says Mauricio Meza, co-founder and CEO of Komodo OpenLab, the company behind Tecla. “In one hand, they are now able to independently access these advanced communicating tools (phone, SMS, email, social media) on the go,” he says. “This increases their independence by allowing them to be in touch with family and their caregivers at any time and reducing the need to always be with someone.

“In a second hand, the multi-functionality of smartphones and tablets reduces the need for them to buy multiple expensive dedicated assistive devices. They can complete a variety of tasks leveraging mobile apps: they can communicate (augmentative and alternative communication apps), control their environments (home automation apps), access printed material (e-books), access entertainment and be more productive at work or school.”

Mauricio says that the company plans to increase the number of platforms that Tecla users have access to. “Our goal is to continue to make mainstream technology accessible for people with disabilities,” he says. The Tecla Shield launched last fall and it already has users in 22 countries.

The future of disability

With wearable technology giving even able-bodied people new capabilities, David says the preconceived notions that people have about those who use technological devices to get by will soon fade away.

“We as a society are more open to having that bridge with technology. There’s going to be less of a stigma surrounding people with disabilities using a variety of gadgets to be able to do whatever they need to do,” he explains.

Mauricio says that technology closes another gap for people with disabilities.

“Using inclusive design and providing the right tools can overcome a lot of gaps and allow the full participation of people with disabilities in our communities,” he says.