Cleantech is booming. The opportunity is huge. Why aren’t women benefiting? 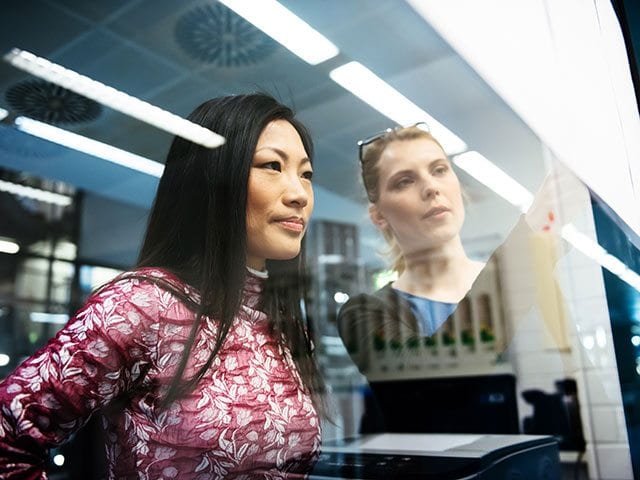 Globally, about 30% of small- and medium-size businesses are owned and run by women. Those numbers aren’t great. But if you look at the clean technology sector—the fast-growing part of the economy that’s working to create a more sustainable future—the numbers are even worse.

At MaRS we are firmly in the corner of female entrepreneurs, with dedicated funding to support them. Yet only about 5% of the cleantech companies we work with have female founders.

The issue stems from, well, STEM. Cleantech draws particularly heavily from disciplines like engineering, which are still dominated by men. Only around one in four engineering grads are female, though that will hopefully begin to change when current efforts to encourage more girls to stick with science, technology, engineering and math begin to pay off.

The lack of women in the industry creates a vicious cycle, as women considering careers in cleantech have few role models to follow. To borrow a phrase from activist Marian Wright Edelman, you can’t be what you can’t see.

To break this cycle, you have to start at the top: help more women entrepreneurs to build companies that will, in turn, provide inspiration and jobs for other women to make their careers in cleantech.

To that end, MaRS is partnering with Natural Resources Canada to launch the Women in Cleantech Challenge. This national competition, which launches today, will identify five of our country’s most promising female innovators, providing them with the mentorship and financial support they need to build successful, growing companies with the potential to make the world more sustainable.

Jodi Glover, the founder and CEO of Real Tech, a clean water technology company, knows what it’s like to break the mould as a woman in cleantech.

“Women in senior positions are rare,” she says. “At events, I’m often the only woman on the stage.” Sometimes customers ask to speak to her engineers or programmers, even when they know she’s the CEO. “I tell them, ‘Guys, I can handle your questions.’”

Jodi and her husband, Andrew, run Real Tech, which supplies water-quality sensors and the associated analysis software to customers in 53 countries. Jodi has always been passionate about the environment and wanted to make life better for millions, so she launched the company in 2004. Used in the field, Real Tech’s mobile sensors quickly determine whether water has been contaminated. Larger units provide vital real-time information, even predictive analysis, to industrial companies and municipalities that use and manage water. With a growing population and dwindling water supply, the demand for Real Tech’s solution is huge, and increasing.

Jodi challenges other perceptions, too. Among the long list of reasons cited for the lack of women entrepreneurs, the strain of caring for children or elderly parents is often close to the top. Conventional wisdom is that women, who still shoulder the lion’s share of care work, can’t raise a family and grow a business at the same time.

Jodi and her husband have been raising three boys while running their company; their eldest, Zach, has a life-threatening medical condition.

“He was five months old,” Jodi says. “We’d just started him on foods and he went into shock.”

Doctors discovered that Zach had food allergies that were so serious that if another child ate cheese or nuts and then touched a toy, Zach could die if he then picked up that toy.

Jodi is convinced that she was only able to manage the demand of Zach’s health issues by being her own boss and having the flexibility to juggle work and doctors’ appointments.

“I was getting called by the school two or three times a week and doctors’ appointments are a constant,” she says.

Women who can’t set their own work hours and drive their own agenda are often forced out of jobs they love to care for sick children, spouses, siblings and parents. In Jodi’s case, as the CEO of her own company, she has an opportunity to make her business and family life work for her by adapting, every day, to whatever challenges are thrown her way.

Build your own business

The aim of the Women in Cleantech Challenge is to help more women like Jodi to build Canadian businesses. Doing so will accelerate the commercialization of clean technologies, create prosperity and improve sustainability, all while helping to demonstrate the potential of women in cleantech.

“Find something you love, but be flexible because you’ll have to find a way to adapt your plan to whatever life throws your way,” she says.

If you have a disruptive idea for clean technology that uses less material and/or energy, generates less waste and causes less environmental damage than the alternatives, apply to the Women in Cleantech Challenge by July 13.