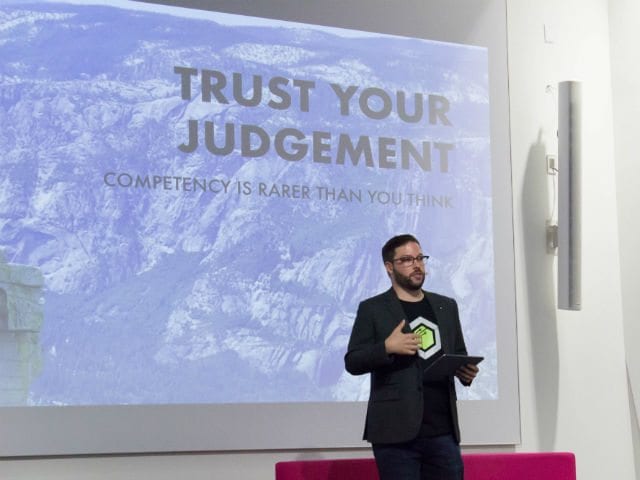 MMB Networks in Toronto currently has more than 40 employees, but the company began the way many startups do: with three friends working out of someone’s grandparents’ basement. As a result, they “did a lot of learning the hard way.” At October’s MaRS Mornings, Daniel Moneta, one of the co-founders at MMB, shared some of the valuable lessons he’s learned while building his business.

The idea for MMB came about organically. Three friends were working together at a company that produced wireless thermostats for hotels that could be controlled remotely. Daniel referred to their time there as “a three-year experience in how not to run a startup.” The trio quickly realized that they understood the market better than the people they were working for, so they quit to start their own innovative venture.

Design and development was the first focus area for this newly formed company. Working on a contract basis for several clients, the team quickly gained a reputation as the only people in the market who knew how to integrate wireless technology into smart products. Connectivity was their speciality, and today MMB Networks is a leader in the Internet of things, using game-changing technology to bring smart connected products to market.

Throughout his journey with MMB, Daniel has transitioned from CEO to executive vice-president of corporate development and marketing, a move that has afforded him the time and freedom to focus more on the company’s vision and thought leadership. With the venture now on firm footing, Daniel has also had time to reflect on the advice he would offer to other entrepreneurs.

He shared the following insights with the MaRS Mornings’ audience in Toronto.

Of all of the lessons that Daniel shared with the MaRS Mornings audience, perhaps the most pertinent was the importance of being part of a community of other entrepreneurs. According to Daniel, he and his co-founders learned a lot from talking to other people who were at the same stage as them, as well as from those at the “been there, done that” stage. While your peers may be bandwidth-constrained they are almost always willing to help.

The next MaRS Mornings will take place on November 21, featuring Chia Chia Sun of Damiva. She’ll be talking investors, taking her business global and learning how to build a billion-dollar brand focused around women’s health products. Join us inside the CIBC LIVE Lounge at MaRS Discovery District to hear her journey from basement business to multi-channel distribution across both the US and Canada.