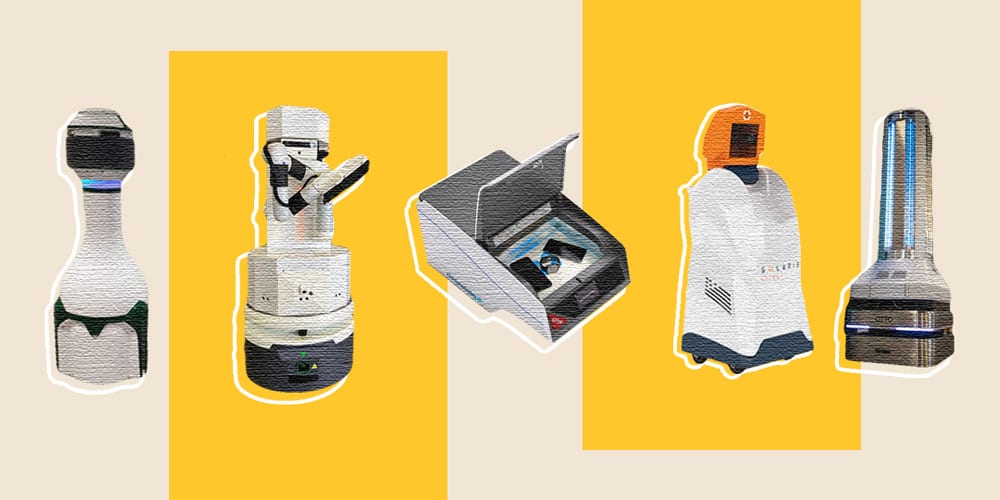 With sanitation being a top priority over the past year, locally-built ultraviolet light cleaning robots are taking centre stage.

In the early days of the pandemic, every possible surface seemed cause for COVID concern. We stockpiled Lysol wipes. We power-scrubbed our groceries. We gave our packages a three-day timeout on the porch.

Over the past year, however, the science revealed that COVID was far likelier to spread through the air than be transmitted across a grimy parcel or subway pole. In early April, the Centers for Disease Control and Prevention updated its guidelines to reflect the low risk of contracting the virus from contaminated surfaces.

That’s the good news. The bad news is that there are plenty of other surface-spreading pathogens that can make us sick, including norovirus, E. coli, and nasty superbugs like methicillin-resistant Staphylococcus aureus (MRSA) and C. difficile. In fact, the WHO worries that these drug-resistant infections are increasing during the pandemic, as antibiotics (which do nothing to stop COVID) are misused and over-prescribed. And these are bugs that have a tendency to hang around: one landmark 18-month study found that a hospital patient was 2.5 times more likely to acquire C. difficile if the room’s previous occupant had been infected, and the larger the room the greater the risk — likely, the authors reason, because of difficulties in effective manual disinfection.

UV-C light offers another approach. For decades, this shortwave light has been used to eradicate germs from objects, spaces, even water supplies. “UV-C light penetrates the cell wall and stops the DNA of a pathogen from being able to replicate,” says Taylor Mann, CEO of CleanSlate, which makes device-sanitation stations. “It can’t breed, so it’s no longer a threat.” The trouble is that people can’t be exposed to UV-C light without harm, either. Enter the robots.

For years, Canadian companies such as Prescientx and CrossWing have tinkered with the idea of autonomous UV disinfection robots to supplement the work of office cleaners. “But there was no market demand for it,” says Barry Hunt, Prescientx’s president and CEO. “Then the pandemic hit and suddenly everyone was ready.”

Last summer, Next Generation Manufacturing Canada (NGen) invested $10 million in a disinfection robot challenge, which helped Prescientx and CrossWing get their prototypes off the ground. Here’s a closer look at what they do and how UV-C robots like them are working to keep our spaces safe. 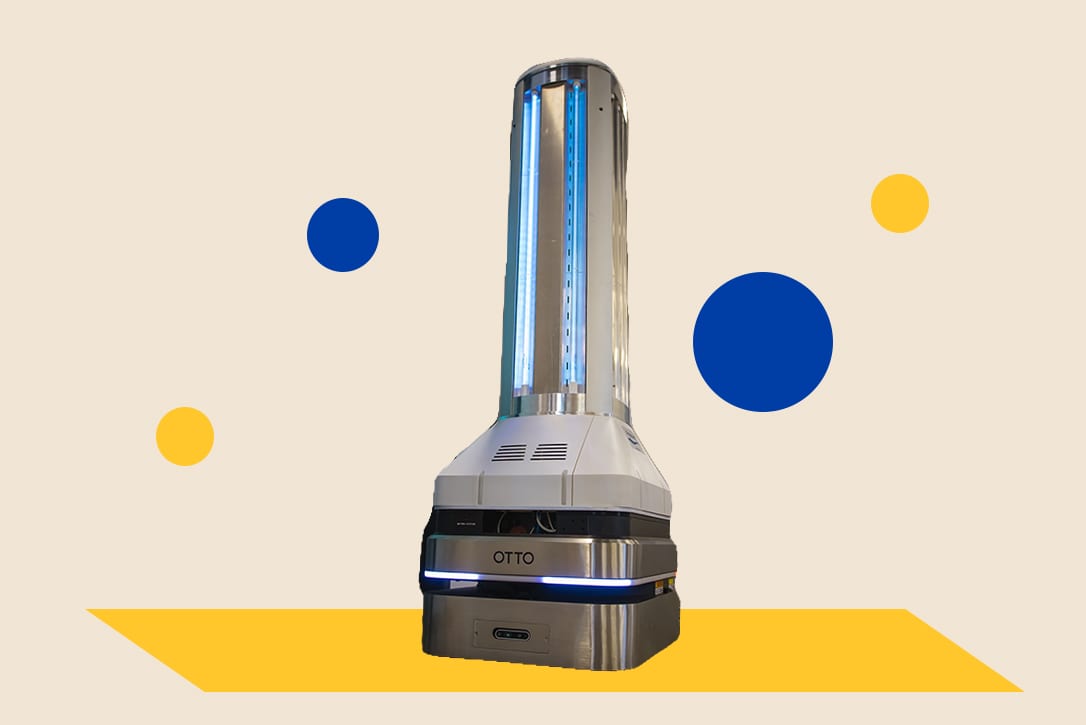 What it is: Violet, a 6-foot-tall, bell-shaped, fully autonomous smart robot equipped with eight UV-C lamps (two on the front and three on each side)
Where it’s made: In Cambridge, Ont.
How it works: “Violet is calculating a lot of things on the fly so she can disinfect as she moves,” Hunt says. The robot uses LiDAR, which measures distance with light, to determine the shape of the room and the objects in it; machine vision to distinguish objects from actual people; and sonar to detect whether those people are standing behind clear, protective surfaces like glass. The robot is self-driving and self-charging: when its battery gets low, Violet books it back to the charging dock to fill up.
Where it’s used: Prescientx just launched Violet in January 2021; currently, the robot is in a trial in a hospital in Collingwood and a large property management company in Toronto.
Bragging rights: “We wanted Violet to work in occupied spaces,” Hunt says. When the robot senses humans in its field of disinfection, it turns off any necessary light panels or pauses until it’s safe to proceed. 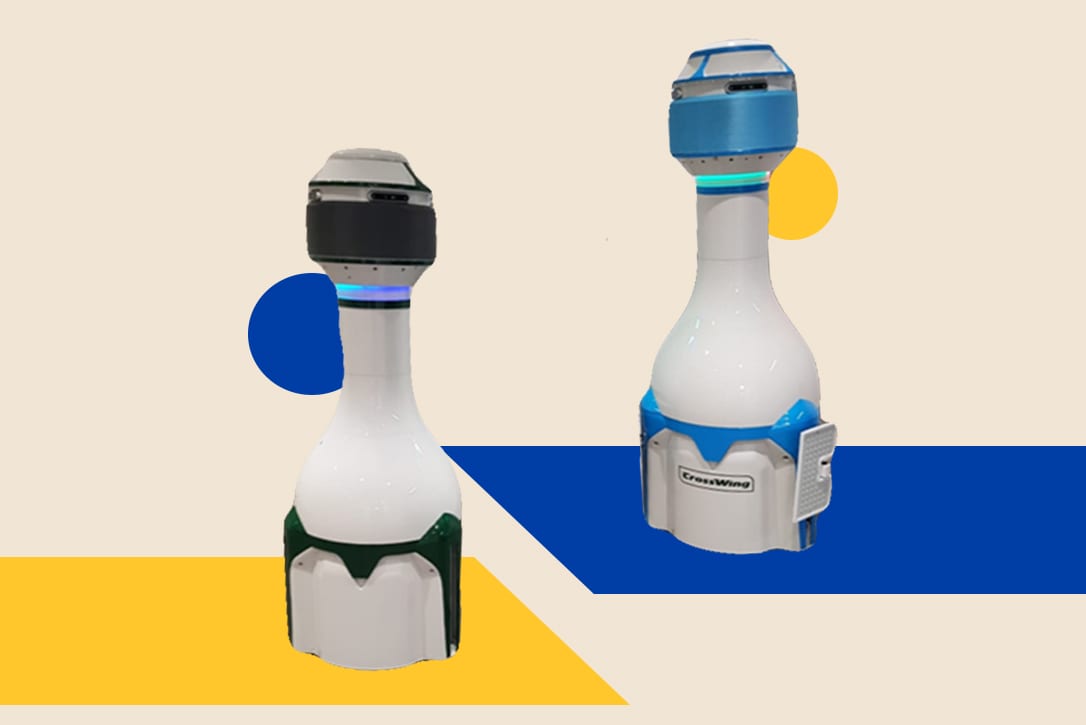 What it is: Cleanbot, a 6-foot tall, bowling pin-shaped, fully autonomous smart robot with UV-C panels that can be tilted or elevated
Where it’s made: The bulk of the bot is 3D-printed and assembled at a lab in Aurora, Ont.
How it works: Cameras and sensors support object detection and depth perception, while artificial intelligence harnesses that information to make decisions about navigation. Those cameras can also be used for broader safety measures: “If someone slips and needs help, the robot can relay a video stream to first responders or send an alert to security guards,” says program manager Aryan Durrani.
Where it’s used: After completing the NGen project in early March 2021, CrossWing sold one of its UV-C Cleanbot prototypes to York University.
Bragging rights: Unlike cars and shopping carts, the Cleanbot can move in any direction, at any angle, at any time. 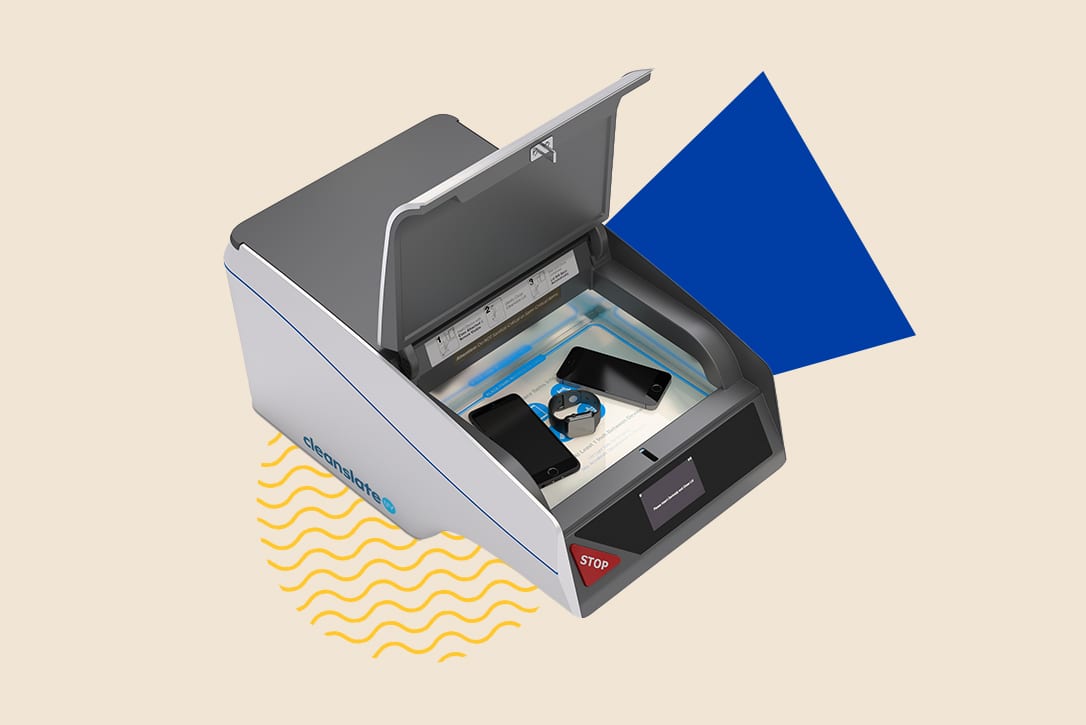 What it is: A free-standing sanitation device that uses UV-C light to thoroughly disinfect everything from keys to badges to wallets to phones. That last one is key: “The average person’s phone has 18 times the germs as a public toilet,” says CEO Taylor Mann. “It’s the third hand we never wash.”
Where it’s made: In Toronto
How it works: Drop your stuff into the device and close the lid; UV-C light beams into the sanitation chamber from all directions to ensure everything is cleaned, even if there are multiple objects inside. The whole process takes 20 seconds, enough time to sanitize your hands before the lid pops open again.
Where it’s used: CleanSlate grew out of a 2014 innovation program at Queen’s University, quickly landing in hospitals and food-processing plants in Canada, the U.S., Hong Kong and New Zealand. In October, they inked a deal with Pearson Airport to install 10 devices throughout the terminals and, in April, they partnered with Metrolinx to install 20 sanitizers at GO Transit and UP Express stations.
Bragging rights: Unlike the majority of alcohol wipes, CleanSlate can be safely used on devices. “That also means we’re saving about 200 pounds of chemical wipes from going into landfills every single year,” Mann says. 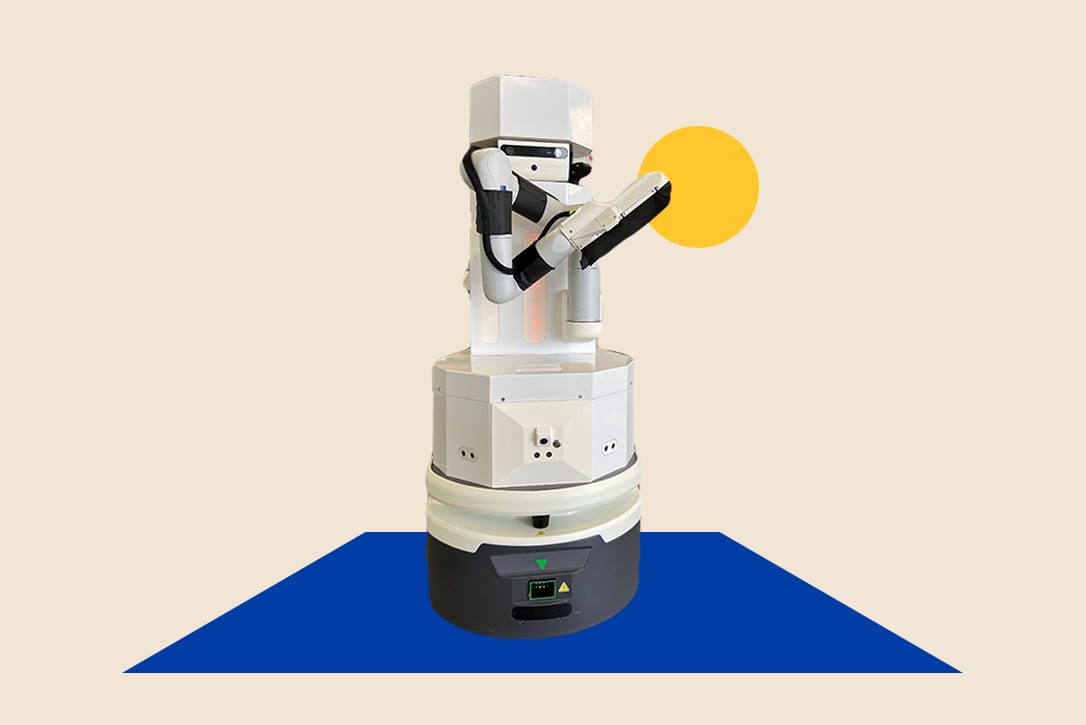 What it is: Amrud, a 4-and-a-half-foot-tall, music note-shaped, fully autonomous smart robot equipped with UV-C light and an articulating arm with a metre-long reach to get into tricky places
Where it’s made: The robot’s torso and software were developed at A&K’s headquarters in Vancouver; the arm is made by Kinova, a robotics company based in Quebec.
How it works: Like Prescientx’s Violet, A&K uses LiDAR, sonar and computer vision to distinguish between objects and surfaces. UV-C light panels on the bottom of the self-driving robot also disinfect large floor spaces.
Where it’s used: Completed in March 2021, the robot is in a trial at Global Affairs Canada in Ottawa.
Bragging rights: “The arm is the way that we get close to high-touch areas like door handles and keyboards,” says CEO Matthew Anderson, who compares the soft rubber brushes on the arm’s end to the bristles on a humpback whale. “That lets us go to the surface and move around without damaging anything.” 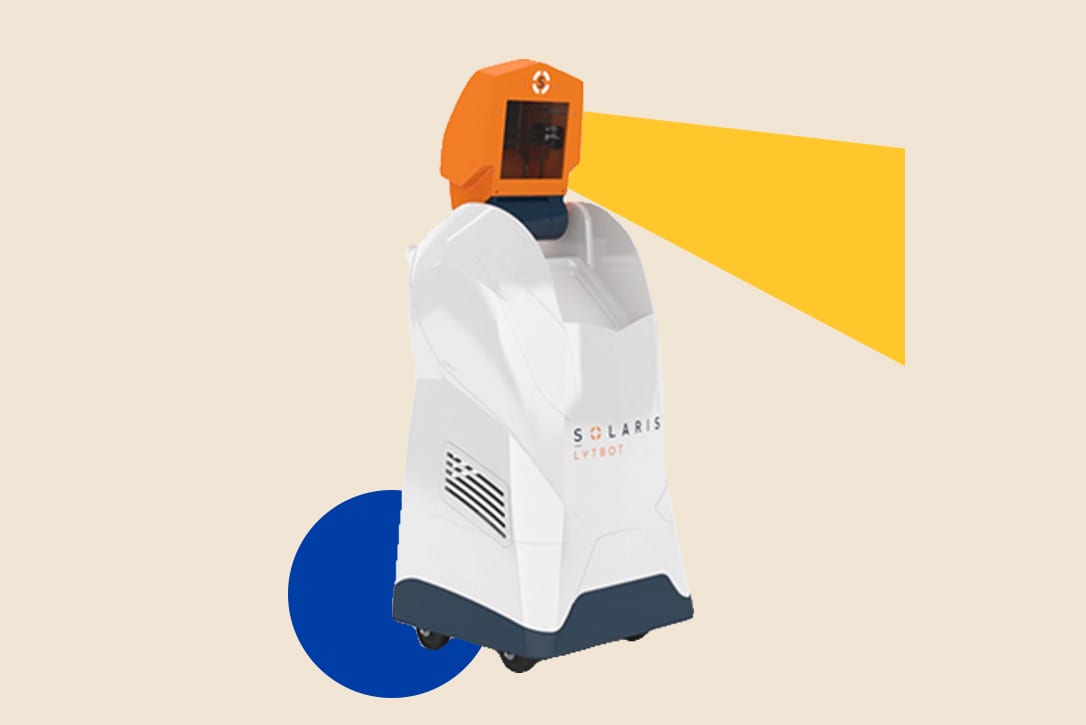 What it is: The Lytbot, a 4-foot-tall, bullet-shaped robot with an extendable head that uses pulsing UV-C light to disinfect high-touch surfaces in patient rooms and reduce hospital-acquired infections.
Where it’s made: In Solaris’s Mississauga facility
How it works: The robot blasts high-intensity UV-C light in three- or five-minute cycles. “The pulsing rapidly heats and cools the cells of a pathogen, almost like blowing air into and sucking air out of a balloon,” says Solaris CEO Adam Steinhoff. “That causes cell walls to rupture and kills the spores dead.”
Where it’s used: In the five years since launching the first prototype, Solaris has sold its robot to roughly 125 hospitals, most of them concentrated in the U.S., along with a few GTA-based facilities.
Bragging rights: The UV-C bulbs sit behind a piece of quartz glass in the Lytbot’s head, which rotates to complete a 360-degree sweep of the room.