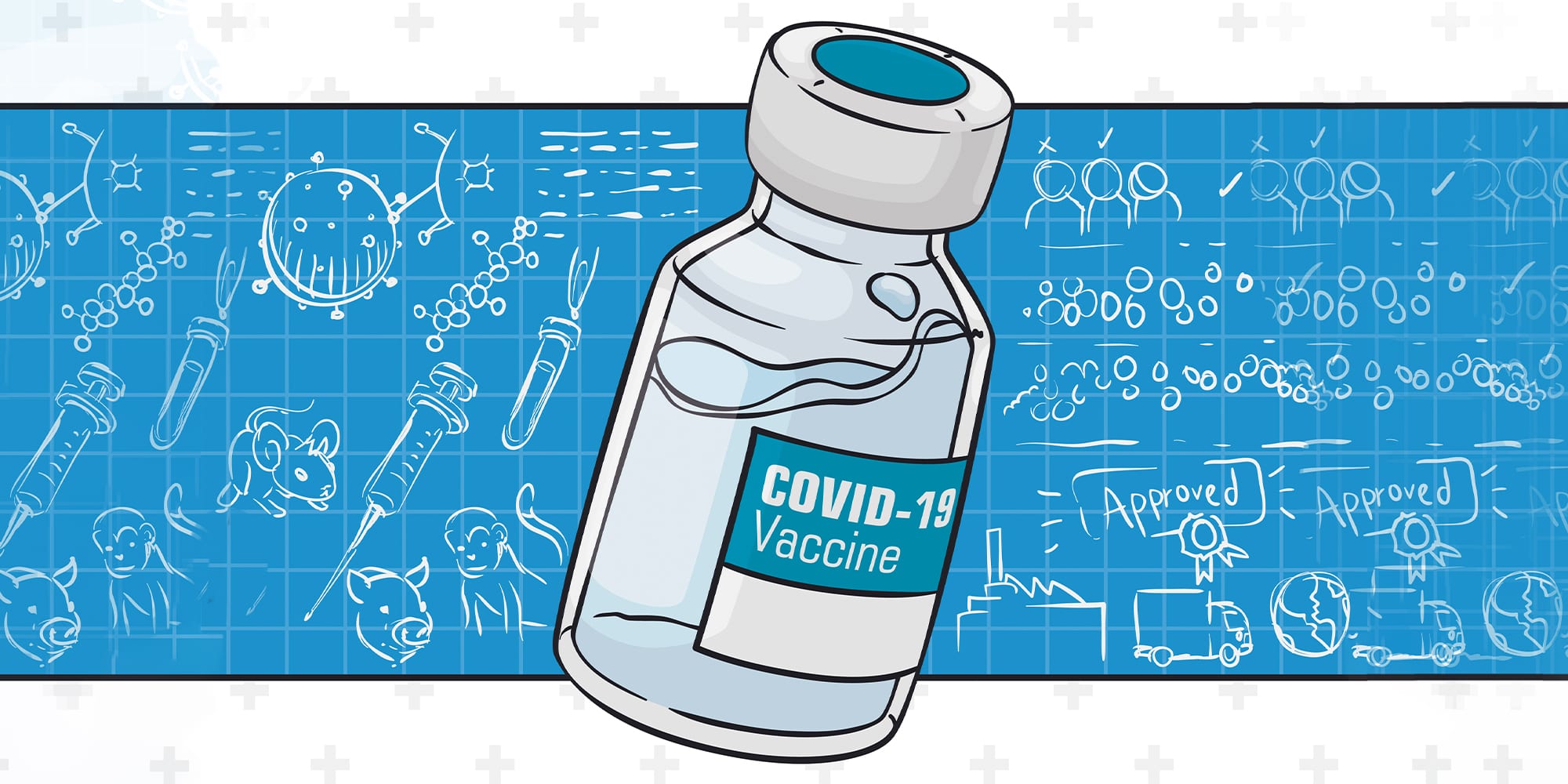 As Canada participates in the largest inoculation in human history, MaRS will be updating you with the latest vaccine news and information.

After a year of economic devastation and roughly 2.25 million worldwide deaths, the end of the coronavirus emergency is finally in sight.

The Canadian federal government has committed more than $1 billion to vaccine purchases from seven leading candidates: Moderna, Pfizer/BioNTech, Novavax, Janssen (a subsidiary of Johnson & Johnson), Sanofi/GSK, AstraZeneca and the University of Oxford, and Medicago. Canada will receive between 20 million to 70 million doses of each jab once they all pass clinical trials and receive Health Canada approval.

The country’s most vulnerable populations — long-term-care residents, seniors over 70, healthcare workers and Indigenous communities — will receive inoculation first. Prime Minister Justin Trudeau predicts that the majority of Canadians will be vaccinated by September 2021.

Check back often for the latest, need-to-know vaccine updates as Canadians prepare for a post-pandemic world.

Many outlets are reporting that Health Canada is in the final stages of approving the AstraZeneca/University of Oxford vaccine. While this version of the medicine has a lower efficacy rate (between 60 and 90 percent) than its two approved counterparts, it is dramatically cheaper and can be kept in an everyday fridge. The Trudeau Liberals have secured 20 million doses. Novavax, for its part, submitted its candidate to Health Canada on January 29, representing 52 million potential doses. The company claimed its shot delivered 89 percent efficacy in a United Kingdom trial, and is strong against emerging variants of the virus.

Delays from both Pfizer/BioNTech and Moderna

The first phase of Canada’s COVID-19 vaccine rollout has faced many logistical challenges. Both Pfizer/BioNTech and Moderna have announced that shipments of Canadian-purchased doses would be delayed due to production problems in Europe. Prime Minister Trudeau maintains that Canada will receive its full orders (six million doses in total) by the end of March. In the meantime, he and Chief Public Health Officer Dr. Theresa Tam advise all Canadians to continue to follow safety precautions to avoid an increase in cases.

Of course, critics of the federal government maintain these delays could have been avoided if Canada had a robust vaccine manufacturing industry. Dr. Alan Bernstein, president and CEO of the Canadian Institute for Advanced Research (CIFAR) recently told The Canadian Press that “we need domestic production capacity for the next pandemic, and also for this pandemic.” Dr. Bernstein went on to say that as new coronavirus variants emerge, Canada will require millions of second- and third-generation vaccines for years to come.

Pharmacists and optometrists volunteer to get more shots in arms

Canada’s pharmacies have the ability to vaccinate three million people a week once supply increases — at least that’s what the Canadian Pharmacists Association recently told the CBC. Ninety percent of the population lives within five kilometres of the country’s more than 11,000 pharmacies, and each is equipped for COVID-19 vaccination. The federal and provincial governments have not yet announced what role these institutions could play in the vaccination campaign.

The Ontario Association of Optometrists has also volunteered to bolster the inoculation effort. According to the group’s president, Dr. Sheldon Salaba, Ontario will need “all hands on deck to get this pandemic under control,” and the province already boasts 2,500 optometrists spread over 200 communities. The current Optometry Act, though, prevents this subset of doctors from giving injections. The Ford Conservatives would need to amend the act with laws similar to those which allow pharmacists to administer vaccines.

Reuters is reporting that millions of Johnson & Johnson’s single-dose COVID-19 vaccine should be ready for rollout by March, and that data on the shot’s efficacy (most crucially with elderly people) will be available by the beginning of February. The corporation has committed to delivering one billion worldwide doses by the end of the year. Canada, for its part, has ordered up to 38 million doses. Dr. Paul Stoffels, Johnson & Johnson’s chief scientific officer, previously stated that the targeted efficacy rate of this candidate was 60 percent. However, early studies suggest that the vaccine might actually have 80-percent potency, lasting at least 71 days.

The Pfizer/BioNTech and Moderna vaccines (as of January 15, the only candidates approved by Health Canada) require two doses injected 21 and 28 days apart, respectively. The latter shot is a booster, meant to extend protection against the coronavirus. But scientists are still debating the timing of those second doses. It’s been posited that boosters can be delayed by several weeks as a means of inoculating as many people as possible until a surplus of vaccines arrives — a contentious strategy already being executed in Quebec. And on January 13, the National Advisory Committee on Immunization asserted that the second dose can be delayed by six weeks should supply run out. According to the CBC, Canadian provinces have administered about 75 percent of available vaccines, representing one percent of the population.

One week into the new year and the CBC reports that Canada is well behind in its rollout of vaccines, citing disparate province-run strategies and gaps in information. Officials have only administered roughly 175,000 of the 424,000 received doses (representing 0.5 percent of Canadians). A report from BMO Capital Markets estimates that the pace of inoculation must quicken by 13.5 times if 60 percent of the population is to be vaccinated by September 2021. Speaking to Canadians on January 5, Prime Minister Trudeau expressed his frustration with the lack of progress and vowed to hold the provinces to account. Meanwhile, Premier Doug Ford has acknowledged the setback and promised speed from now on. “Our message to the federal government is, just keep these vaccines coming,” Ford says. “Once our machine gets going, there is no one who can compete with us.”

On December 23, Health Canada approved the use of Moderna’s COVID-19 vaccine, confirming that 1.2-million doses are expected to arrive before February. But Health Canada wasn’t done yet — it also approved a Saskatchewan-developed vaccine candidate for human trials, as reported by CTV News. Created by VIDO-InterVac at the University of Saskatchewan, the medicine could be ready by the end of 2021, should the three-phase trials be successful. Participants are soon to be recruited and will begin their tests in January. Like the Novavax and Sanofi candidates, the VIDO-InterVac version is a subunit vaccine — composed of protein components capable of protective immune responses.


Moderna vaccine: expensive but safe, effective and easy to deploy

On December 17, a panel of advisors to the U.S. Food and Drug Administration endorsed emergency use of Moderna’s vaccine candidate, paving the way for rapid approval. All signs point to a similar verdict in Canada, with 168,000 doses expected by year’s end. At more than $40 a dose, Moderna’s medicine is expensive (Pfizer/BioNTech’s is about $25 per dose, while Oxford/AstraZeneca’s is only $5–$6.) However, the former has several key advantages. First, unlike the other frontrunners, Moderna claims its vaccine can prevent infection in the first place, not simply prevent symptomatic disease. Second, it can be stored in a regular fridge between 2° and 8°C, making it ideal for remote and rural locations.

First Canadians get vaccinated on road to immunity

They’re calling it “V-Day.” On December 14, 2020 at 11:25 a.m., 89-year-old Gisèle Lévesque of Quebec City became the first Canadian to receive Pfizer/BioNTech’s COVID-19 vaccine. With an initial 30,000 doses delivered, public-health officials are hurriedly inoculating as many vulnerable Canadians as possible. Prime Minister Justin Trudeau recently told CTV News that people who want to receive the jab may even get it before the previously announced September 2021, provided each of the country’s seven candidates are approved. (The federal and provincial governments have no plans to make immunization mandatory.) What is certain, says Trudeau, is that by March some three-million priority Canadians (or eight percent of the population) will be vaccinated, with at least 15 million more expected to receive the medicine between April and June.

As of December 18, according to the CBC, New Brunswick is the only province yet to begin vaccinations due to “logistical and human-resource reasons.” The province is scheduled to hold its first vaccination sometime on the weekend. Canada’s territories, meanwhile, will not receive the Pfizer/BioNTech version because of complications around its ultra-cold storage requirements. They will, instead, receive the Moderna vaccine once it is approved by Health Canada.

2021 cannot come soon enough. CTV News reports that up to 249,000 doses of Pfizer’s two-dose vaccine should arrive before New Year’s, earmarked mostly for long-term-care residents and staff. It’s also being reported that Health Canada could approve the vaccine in a matter of days, with first inoculations beginning as early as the week of December 13. Once cleared, the doses will be shipped to 14 distribution sites across the county — one for each province, and two for the four largest provinces — each equipped with the necessary cold storage (Pfizer’s medicine must be stored in a freezer at temperatures between -80°C and -60°C, or in a thermal container between -90°C and -60°C).

Home-grown vaccines will give Canada more control over recovery

Of Canada’s seven leading vaccine candidates, only Medicago’s (currently being made in Quebec City) is home grown. This fact has irked Trudeau critics, who argue that further investment in Canadian vaccines is needed if the country hopes to end the crisis on its own terms. “It’s very important to be self-sufficient and have access to vaccines that are being produced here in Canada, for Canadians,” Dr. Volker Gerdts, CEO of VIDO-InterVac at the University of Saskatchewan, told the CBC.

Still, many Canadian vaccine candidates have been registered with the World Health Organization. And while the Pfizer and Moderna jabs have high efficacy rates, experts agree that society will need as many potential cures as possible to quickly and affordably eradicate the virus. Some vaccine candidates may be more effective in certain ages and ethnicities; some may produce even better results when combined with other therapies; and some — like two of the medicines listed below — are even being designed for those with a fear of needles. Here are some of Canada’s most promising vaccine candidates:

Freezers being rolled out at a blazing speed

The Trudeau Liberals have been bullish about their strategy, even suggesting that the military could be deployed for vaccine delivery. Buying and shipping ultra-low temperature freezers for Canada’s distribution centres and vehicles is essential to the plan. And already, business is booming for local manufacturers. Paul Greco, president of 360 Medical, told the Toronto Star that he’s already sold a year’s worth of ULT freezers at $8,500 a piece; Guelph-based Danby has developed new freezers equipped with smart technology that will be ready around April; and Windsor Regional Hospital recently procured three -80°C freezers (capable of holding 400,000 Pfizer doses each) and four -25ºC freezers (with room for 140,000 Moderna doses each).

Editor’s note: this article is being updated on a regular basis. Its last update was February 1, 2020.