How one entrepreneur raised funding for his Internet of Things company 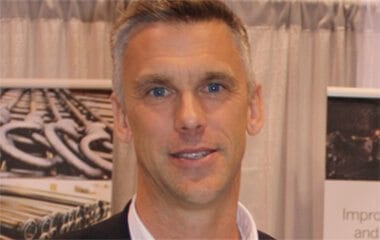 Kirk Petroski founded Symboticware in 2008 as an early-stage information technology venture looking to build interoperable platforms for the delivery of smart software applications. It has been quite an adventure by many accounts. Fast-forward to today and Symboticware has become an industrial Internet of Things (IoT) company poised to become one of Ontario’s breakout companies. The business recently exhibited with ecosystem partner Schneider Electric at Cisco’s Internet of Things World Forum 2014, which is an exclusive, prestigious and by-invitation-only event.

As part of the MaRS Market Intelligence Connected World Market Insights Series, which features a report focused on the mining industry, MaRS spoke with Kirk about how his roots and community have helped him during his entrepreneurship journey.

Market Intelligence: Why did Symboticware choose to target the mining industry first?

Kirk Petroski: In 2008, we didn’t really have a context of where to apply [our technology], but being in Sudbury, mining was the most logical choice for us by default.

MI: New entrepreneurs often do not know that help exists for them. How was your experience?

KP: At the time in Northern Ontario there were really no organized groups like MaRS or Communitech. There was a group called the Sudbury Area Mining Supply and Service Association (SAMSSA), which I was involved in and was a former president of. However, I found that, on the technology side, there was really no group where a company could go to put together all of those pieces [necessary to begin a tech startup]. Since then, the Northern Centre for Advanced Technology (NORCAT) has evolved to support that process, and NORCAT’s CEO Don Duval provides services to tech entrepreneurs in Sudbury now.

MI:How did you fund your startup during the early days?

KP: In 2008, we raised funds and grew a lot through government programs. I was one of the trailblazers at the early stage, putting all of these funding pieces together. FedNor was the first agency to support us after I came to them with an idea. I believe that, through social equity, I was able to leverage my work and reputation with SAMSSA to secure this initial seed money.

There is also National Research Council Canada’s Industrial Research Assistance Program (IRAP), which has been very supportive with some of our early-stage research and has even supported little things, like our patent application. Today IRAP continues to support us on new product development initiatives. There’s also the Northern Ontario Heritage Fund Corporation, which is part of the Ontario government’s innovation portfolio. In addition, we have a group called the Centre for Excellence in Mining Innovation (CEMI), which is one of Canada’s innovation centres for mining. It coincidentally started around the same time we did. We were one of the first companies to be a part of its small- and medium-size enterprise (SME) portfolio. CEMI also helped to fund part of our development. We have also been doing Canada Revenue Agency’s Scientific Research and Experimental Development Tax Incentive Program (SR&ED) successfully since 2009.

MI: How did you secure your first customers?

KP: We had some very early-stage collaboration between original equipment manufacturers like Toromont CAT, organizations like CEMI and end users such as Vale and Glencore. In fact, Vale and Glencore were also major sponsors for the development of the platform. Not only did they adopt it, but they also provided a significant amount of money to help fund it.

MI: It is always wonderful for end users or customers to step up and pay for what they need, and it is even more wonderful that the giants of the mining industry are adopting your solutions.

KP: I should mention the support from a commercialization perspective. We were part of an export marketing assistance program that SAMSSA helped to establish as part of its effort to promote this mining cluster in Northern Ontario. The program was developed and is now managed as the Mining Supply and Services Export Assistance Program – Ontario’s North Economic Development Corporation, and supported by both the Ontario and federal governments. It allowed Symboticware and other companies to do early-stage exports, marketing and workshops. The program also provided some subsidies on travel to get us into foreign markets.

MI: Going global is definitely something that many entrepreneurs are interested in.

KP: There are a few organizations that we are involved with on that front and others we can consider. We’ve been involved with Wavefront, which is headquartered in Vancouver, and have participated in a couple of trade missions. Then there is Export Development Canada (EDC), which helped us a lot from two perspectives. It guaranteed our SR&ED, if necessary, and it also linked us with trade commissioners, potential customers and end users. What’s nice about EDC is that Canadian companies do get a foot in the door with the chief technology officers, chief financial officers and other decision makers at important companies. In our case, these companies are large mining companies, particularly those in South America.

Since we’re on this topic, we’re also at work with TECTERRA, a GIS-based funding organization out of Alberta. It helped with some of the funding to mitigate the risks with our customer in Northern Ontario at the time when we were working on our product SymRTU.

MI: It takes a village to raise a startup.

KP: Absolutely. I don’t want to leave anybody out. Really, it’s an enormous amount of effort to pull in those resources for Symboticware, but at the same time they’re all out there if you’re able to demonstrate the benefits of innovation and the benefits to Canada. These resources have all been built to help Canadian SMEs succeed. They’re there to help foster innovation. That said, at some point you have to be less dependent on the programs that have helped you. You’ve got to build a sustainable business.

To read more about Symboticware, mining industry trends and IoT innovation in the industry, please check out our latest report: “Mining & Metals + Internet of Things: Industry opportunities and innovation.”

To learn more about how Sudbury is building a new technology hub, check out my blog on TechVibes: “Boldly Building a Silicon Valley in Canada… for Mining.”