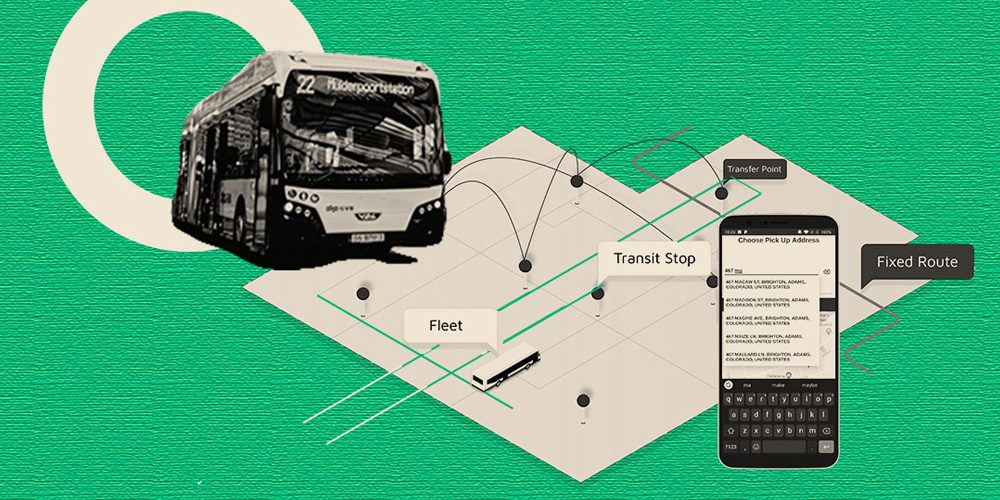 Toronto startup Pantonium has created a bus-hailing app that can increase ridership, save municipalities money and drive Canada toward net-zero.

Growing up in rural Malaysia, Khun Yee Fung first started taking the bus alone when he was six years old. When he moved to Toronto during his last year of high school, he lived north of Lawrence, at Warden, and the bus was a lifeline that took him to school, grocery stores and the reference library. In both places, though, there were things that irked Fung about the respective transit systems: in Malaysia, it was private and for-profit and didn’t run in sparsely populated areas; in Toronto, buses were often too crowded and the transfer system a constant source of exasperation. “I always knew that something was not right with these two pictures,” Fung says.

Decades later, as the co-founder and chief technology officer at Toronto firm Pantonium, Fung is trying to correct those pictures. Pantonium builds on-demand transit software that optimizes a community’s bus fleet in order to provide riders, essentially, with door-to-door service when they want it. It’s not exactly a taxi service or Uber — customers still need to travel to existing bus stops, and, of course, will still be travelling with other passengers — but it goes a long way to making public transit more flexible, cost-effective and efficient.

All of these things, in turn, help make transit more environmentally sustainable, especially right now, when the pandemic has hobbled transit systems all across the world. Public transit ridership cratered over the last year-and-a-half: even in late August, with much of Toronto open again, subway traffic was only a third of what it had been. Revenue has, correspondingly plummeted, which will, in turn, continue to make transit worse for years to come.

But with fewer people using transit and more people consequently commuting by car, emissions will also only rise — right at the moment when we need them to rapidly go in the opposite direction. In 2021, according to a report by the International Energy Agency, global energy-related CO2 emissions are projected to rebound and grow by nearly 5 percent, the largest single increase since the recovery from the financial crisis more than a decade ago. Pantonium’s technology helps complete a virtuous circle — it makes transit better and more convenient, which in turn will bring back riders, which in turn will cut emissions.

Before co-founding Pantonium in 2011, Fung was a founder of Cube Route, an on-demand logistics startup where he wrote the algorithm architecture for its logistics management system. Those algorithms helped make the delivery routes for customers such as Frito-Lay and The Home Depot more cost-effective and efficient. When Cube Route was sold in 2006, Fung wondered if he could apply the same kind of optimization to moving people.

A number of now-famous companies were already trying to disrupt the taxi industry, but Fung saw an opportunity, and a more socially responsible one, in doing the same with public transit: “Public transit is extremely important for social mobility. Without the TTC, I would have never been able to explore Toronto, for example. It would have been too expensive.” He joined forces with Remi Desa, an engineer and Cube Route operations manager, who shared his vision. “For us, optimization — trying to utilize things better — is very important,” Desa, now Pantonium’s CEO, says. “Not to waste, that’s always been a motivation for us.”

There have been other attempts to modernize transit. In Ontario, for example, in the mid-70s, the TTC and Go Transit launched Dial-A-Bus to service Toronto’s growing suburbs. That experiment, whereby riders could call a phone number and a minibus would arrive at their front door, was a failure, however — the buses were never that popular, service schedules constantly revised, and the costs, for the province, akin to those of a government-run taxi service. It was cancelled in 1976.

I think sometimes people sometimes forget that the best way to reduce CO2 and to provide a positive environmental impact, is to get more people to use public transit

But the technology now available to transit systems is light-years ahead. Through Pantonium’s app, riders schedule a trip, indicating their pickup and drop-off times. AI-powered software takes that data, constantly updating in real time to optimize other riders and trips, and maps the best routes to get everyone to their destinations as quickly as possible. This lets public transit agencies decouple buses from fixed routes and send them where demand is greatest. One of Pantonium’s innovations was to view municipalities as single, discrete service areas, making transfers, the bane of Fung’s TTC experience, a thing of the past.

Fung and Desa first piloted their software in Belleville, Ont., in fall of 2018. The city of 50,000 had received a $2-million grant from Sustainable Development Technology Canada (SDTC) to develop on-demand transit, and adopted Pantonium’s technology for its late-night routes. The pilot was immediately successful: ridership increased by 300 percent, with the same number of vehicles able to cover 70 percent more stops.

Other municipalities took notice. Michael Mousley, Stratford, Ont.’s transit manager, had long been pondering on-demand as a way to improve their “dismal” Sunday service. After trying out Belleville’s system first-hand, he was “hooked right away.” He was most delighted by the fact that on-demand gave him control of his own travel. “It could be on my time, when I wanted to go do things,” he says, “not on the transit’s time.”

When transit agencies talk about greening operations, they’re usually talking about getting electric or hydrogen buses. But these capital intensive investments can often take several years to implement, as in Ottawa, which aims to have a zero-emission transit fleet by 2036. Pantonium’s solution, meanwhile, can be implemented almost immediately, and even when greener vehicles are in use, it can make them more efficient as well. (A report produced by NatureBank for SDTC last spring estimated that if such on-demand transit was adopted in 46 Canadian cities by 2038, emissions would be reduced by 210 kilotonnes compared to conventional transit.)

In July, 2020, Mousley replaced his Sunday fixed-route service with on-demand, and then, last February, expanded it to Saturdays as well. When the system ran fixed routes on Saturdays, buses travelled about 2,200 kilometres a day; with on-demand, that’s been reduced to 700. That has saved the city $300,000 in fuel costs, with a corresponding drop in emissions.

Pantonium has so far deployed its on-demand system in 11 municipalities across North America. Persuading risk-averse and cash-strapped cities and regions, however, remains a constant challenge. “It’s a new concept,” Fung says. “It’s not always easy to convince people that it can be useful.” But one of the system’s greatest virtues is its flexibility. A far larger municipality like the City of Toronto could implement a hybrid system where more densely populated neighbourhoods maintain their fixed-route bus service and rapid transit system, while on-demand services quieter ones with less demand. “You basically just pick what is the most productive and most efficient,” Fung says.

“I think sometimes people sometimes forget that the best way to reduce CO2 and to provide a positive environmental impact, is to get more people to use public transit,” Desa says. “It’s a solution we’ve had for a long time. The challenge is to figure out why people are not using it. And that’s what we’re trying to solve.”

Pantonium is one of the 10 Mission from MaRS Climate Champions. Together, these Canadian companies have the potential to reduce CO2 emissions by 42 megatons by 2030. Learn more.