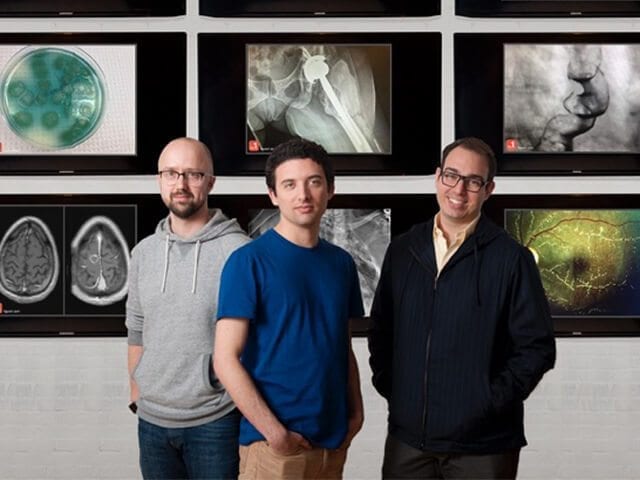 A baby is born with an unusual skin condition at a birthing centre in Haiti. The nurse caring for the baby has never seen this condition before and the family doesn’t know what to make of it either.

The nurse takes out her phone and posts a photo on Figure 1, an app that allows healthcare professionals from all over the world to share and talk about medical cases and innovative treatments.

She receives advice from a pediatrician in America, who assures her through messages on the app that the skin condition is mild and doesn’t need any special followup.

This is one of the many memorable stories that Josh Landy, co-founder and chief medical officer of Figure 1, has seen unfold on the app.

“To be able to get that support from people around the world speaks to the global nature of healthcare and the incredible reach a network like this can have in helping people in the future,” Josh says.

Why Figure 1 built a medical app

The idea for Figure 1 came from Josh’s experience as a practising physician. When looking after patients, he often works with input from multiple specialists. However, contacting these specialists and keeping them all up to date about a case is difficult because everyone is busy and there’s no consistent form of contact.

In 2012, Josh was invited to be a visiting scholar at Stanford University where he undertook research on how young physicians use their mobile devices for medical education. He found that physicians were taking photos and sending them to each other to ask about, update each other on and teach about patients’ cases. His findings were the basis for Figure 1, which was founded in 2012.

“The concept was to create a network where people could exchange these images and these conversations, and it would be archived and indexed,” explains Josh.

With help from his co-founders, Richard Penner and Gregory Levey, the prototype for the app was created.

Josh says most of his colleagues’ reactions to the app were “Oh, I thought of that!” which validated the idea even more.

The other reaction he came across was concern over privacy. Josh and his team dealt with this issue by hiring a privacy law firm to help them develop an app that would be able to maintain privacy. The solution was to remove all of the private details from every photo that is uploaded.

Currently, Figure 1 is being used in 190 countries around the world by over a million healthcare professionals. Josh sees this as a sign of progress in the healthcare industry in terms of knowledge sharing.

“I think it’s a democratization of healthcare knowledge, meaning that the knowledge of a medical specialist is not beyond the reach of any person who has an Internet connection,” he explains.

The future is now, says Josh, with Figure 1 effectively leveraging the power of the Internet to deliver information and education. He also adds that, as someone who frequently finds himself alone in the intensive care unit at 4:00 a.m., the app helps him to connect with the healthcare community.

“You’re able to upload a case and see that there are dozens of other people doing the same work that you’re doing who are able to help and support you,” says Josh. “It makes you feel like you’re part of maybe an unusual profession and certainly an interesting community.”