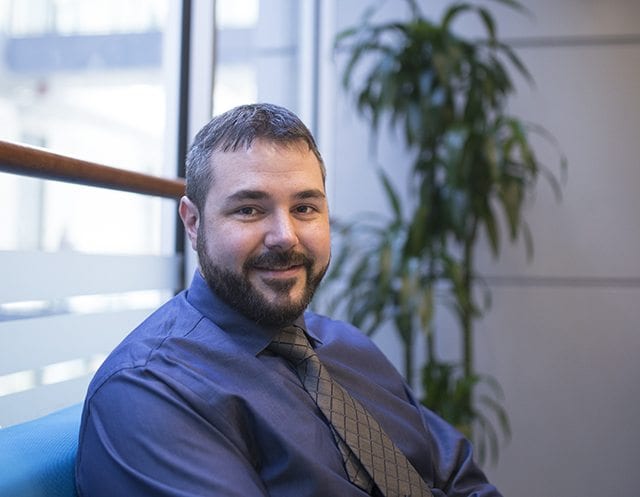 When James Bateman’s father-in-law was diagnosed with cancer in 2010, Bateman found a gap in the medical system he couldn’t ignore. Over the next three years he noticed his mother-in-law lugging piles of medical records in an accordion binder between their home and four different hospitals around the GTA, as she accompanied her husband on visits to various specialists.

“It just seemed crazy to me that we hadn’t solved this problem yet,” says Bateman.

Today, Bateman is the co-founder of MedChart, a cloud-based portal that retrieves medical records from a variety of healthcare providers and allows patients to view, store and share them online. For a $10 service fee, patients can access their data online from general practitioners, hospitals, pharmacies, optometrists, chiropractors and naturopaths.

Uncharted paths are somewhat of a specialty for Bateman. A fully licensed carpenter, he first went into business building houses with his dad at the age of 17.

“This is where my entrepreneurial journey began,” says Bateman, while holding up a 15-year-old photo of him and his dad in construction hats, posing in front of the houses they were building at the time.

While Bateman was growing up, his dad owned and ran several businesses in contracting and construction. Following in his footsteps, Bateman became a carpenter’s apprentice as a teenager and, in 2003, went into business with his father as equal partners building frames for new houses.

“It was my first real venture running a company – having employees, closing contracts and negotiating with home builders.”

Bateman enjoyed running the company, but his attention was soon drawn to another field altogether: quantum mechanics and quantum computing. He decided to learn more about it and went back to school, attending morning classes before running back to manage the construction site in the afternoons, and then returning to attend night classes. He continued with this frenetic pace from 2007 to 2009, before being accepted into the engineering science program at the University of Toronto on a full scholarship. That’s where he met Derrick Chow, with whom he co-founded MedChart in 2014.

A serial entrepreneur, Bateman also founded another company during his undergrad called Devra Sports Development – a business that sends videographers to rugby games to film referees and provide assessment reports. Like his construction business, the video company also started to gain traction, but Bateman says he wanted to make more of an impact.

“The contracting business, the carpentry, the referee professional development…these were all great experiences, but I was waiting to find an idea like MedChart, which has the potential to be massively scalable and affect the lives of basically everyone in the world who has the opportunity to use the system.”

He says it helps combat complexities in healthcare communication. The patient-portal solutions currently offered by many institutions often present medical data in read-only formats, require a login for every site, and don’t allow patients to link or share between portals. In the case of Bateman’s mother-in-law, MedChart would have helped her avoid trips to hospital health record departments, saved her money spent on record checks and parking, and helped her avoid spending so much time filling out paper forms.

“All of these institutions are trying to talk to each other and it’s creating a mess,” says Bateman. “Our focus is on a real patient-centred model where the patient owns their information and is able to direct the use of it across the entire healthcare system in any way they choose.”

To make the service affordable for patients, the two-year-old startup has partnered with institutions like Southlake Regional Health Centre, CAREpath and Bayshore HealthCare. In the future, Bateman hopes to offer the service for free through as many insitutions as possible, so that everyone can have online access and control over their health data, and a copy of their basic medical records.

Bateman, who’s put his PhD on pause to continue building the business, says he stays motivated knowing the platform is helping people in need.

“What we’re building is going to help people navigate the healthcare system, so they don’t have to experience what we went through with my father-in-law. People shouldn’t have to spend time away from their loved one dealing with administrative problems and paperwork. That time is really valuable.”