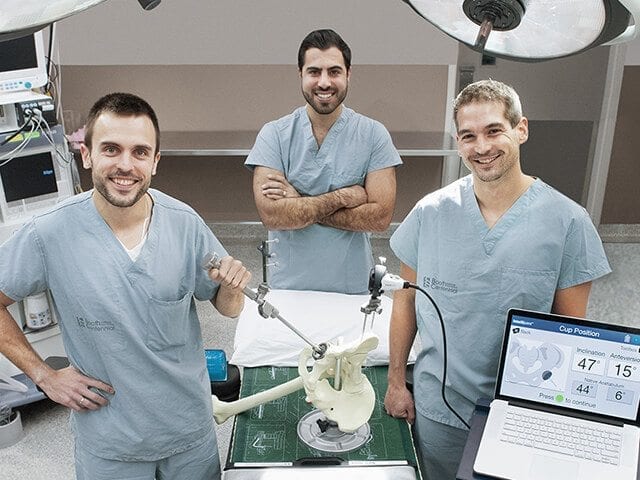 Armen Bakirtzian grew up with a clear sense of how the body can deteriorate. The son of an orthopaedic surgeon, he knew all about the pain that crumbling joints can cause and how artificial replacements can make it go away.

In reality, up to 62% of hip replacements leave one leg longer than the other. About a third of patients are dissatisfied, a significant number require corrective surgery and many surgeons are facing lawsuits as a result.

The reason for all this? Surgeons have a hard time getting accurate measurements to ensure a new hip is placed properly. Armen, then a student of biomedical engineering, decided to do something about it.

The end result was intellijoint HIP, the flagship product of Intellijoint Surgical, the company he launched with his classmates Richard Fanson and Andre Hladio. The new generation of intellijoint HIP, which now allows surgeons to measure cup position, received much-anticipated FDA clearance for use in the US last month.

Already approved in Canada, the device improves surgical outcomes by helping to accurately control the positioning of a hip replacement, and has been used in more than 250 surgeries since making its debut at Toronto’s Mount Sinai Hospital in 2013.

“Being in an operating room setting with a surgeon was unbelievable,” Armen recalls. “That night we might have had dinner to celebrate—but then it was back to work.”

intelljoint HIP started as a university project. After talking with his father, Armen came up with the idea and partnered with Richard and Andre to pitch the idea at Ontario’s Next Top Young Entrepreneur Start-Up Pitch Competition in 2010. After winning the top prize, the three entrepreneurs co-founded Intellijoint Surgical (formerly Avenir Medical). intellijoint HIP officially launched in Canada last July at MaRS.

The company hired its first employee just three years ago and has grown at a remarkable rate—a huge feat for a medical device company.

“It’s been an unbelievable learning experience for me and my co-founders, something we wouldn’t have gained in a lifetime career working somewhere else,” Armen says, now CEO of the Waterloo-based company. “To go from desk-sharing with three people in the Accelerator Centre to working with 24 other people who can communicate what our company is about—it’s exciting.”

Yet, he cautions, entrepreneurs should resist resting on their laurels and never lose track of their long-term goals. The hip is far from the only joint that causes pain—the team is working on other applications of the technology. Which means even more work. And more work means a bigger team.

“Finding talent is one of the toughest aspects of startup culture. Building and growing a team that buys into our original vision is challenging and we work hard to keep relationships between the founders and the team as tight as possible. We’re fortunate that our three co-founders lead different business divisions so that can instil our culture and values across the company.”

“It’s not easy,” Armen says. “Otherwise it would have been done before.”

#HumansofMaRS is a regular series celebrating the startups MaRS works with. Meet other #HumansofMaRS in our Flickr album. To read more about the high-impact companies we work with, our programs and key successes, read our report: Place Matters.