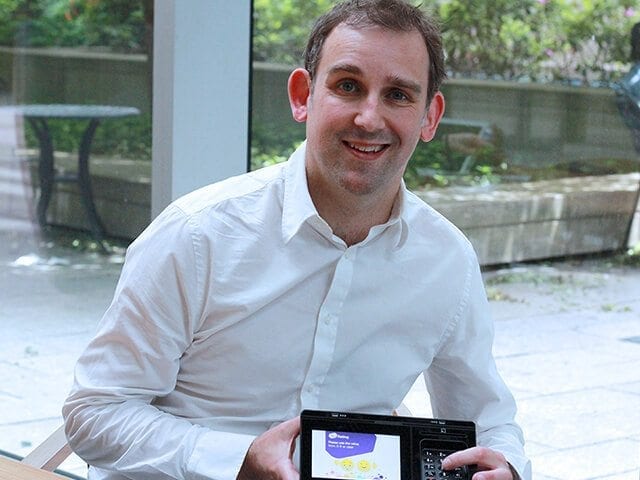 For businesses, getting useful feedback from customers can be a struggle.

Retail stores try to do it by putting a link to a questionnaire on the back of their receipts, which their customers likely just throw away (even if there’s a possibility of winning 50% off their next purchase). Restaurants attempt to get diners to fill out long-winded comment cards at the end of their meals to no avail.

“The reality is, I’m time-poor,” Jon says with a laugh.

That’s also the reality for many customers. As the head of TruRating Canada, Jon has made it his job to bring the country’s businesses faster and more effective customer feedback.

Bringing the ratings revolution to Canada

The idea for TruRating came from the mind of Georgina Nelson, the company’s founder and CEO, who saw a problem with the ratings and reviews industry. In 2013, Georgina, then a lawyer for the United Kingdom–based consumer magazine Which?, realized that ratings websites only represented either the one-star or the five-star reviews, and nothing in between. She also saw that customers wanted a quick way to give their feedback. And so TruRating was born.

The TruRating software is integrated into payment terminals, giving customers the ability to rate their experience with a quick push of a button. Users are asked to rate the business from zero (awful) to nine (amazing) based on one question that covers an important aspect of the venue (say, its atmosphere or its value). In return, the software offers businesses reliable data that represents the opinions of the majority of their customers. The software is currently live in 200 businesses throughout the United Kingdom and Australia.

Jon joined the company over a year ago to bring the ratings revolution to Canada.

“Part of my background is helping businesses use data and insights to make better decisions,” he explains. “I saw how valuable it could be to give businesses that rating information.”

Businesses can make better, customer-informed decisions through the visual data the TruRating software provides them.

The average of individual customer ratings gives a business its TruRating. These ratings can be published on the business’ profile page on the TruRating app and website, allowing customers to search for them in listings.

Jon has seen businesses improve by taking their TruRating into consideration. For example, one restaurant recognized that it needed to make changes to its menu based on customer feedback it received from the software. After it makes those changes, the restaurant will be able to get immediate feedback from its diners about whether they think the menu has improved and then progress from there.

“Businesses are able to make decisions based on really strong quantifiable forecasting information and customer sentiment,” explains Jon. “They’re also able to see the return on investment from making that change.”

As an entrepreneur in the fintech industry, Jon has learned the importance of building strong partnerships and networks. Bringing truRating to Canada, for example, involved fostering healthy relationships with businesses that could help the company to integrate onto payment terminals.

“You have to build these partnerships with transparency, honesty and positivity,” says Jon.

Currently, TruRating has signed a number of partnerships with acquirers, solution integrators, hardware manufacturers and merchants, and is preparing to go live in the Canadian market.

Partnership deals are not the only key to becoming successful, though. Building nourishing relationships within the company’s team is just as important.

“The team that I’m building and the individuals within that team are the reasons why TruRating is a success,” says Jon. “We work well together because we believe in the good that we want to deliver to consumers.”

The team’s hard work is paying off and can be seen through TruRating’s list of accolades, which includes winning the Best Payments Industry Newcomer Award at the 2016 Card and Payments Awards.

The future of TruRating

By next year, Jon anticipates that TruRating will have collected 270 million ratings. With those numbers, the company is primed to be a global success, he says. But the real winners will be the businesses and customers who benefit from the software.

“At the end of the day, as happy customers, we’re going to recommend where we’ve been to our friends and colleagues—and businesses make better decisions as a result of that,” Jon says.

TruRating should be live in Canada within the next third or fourth business quarter.