Hybrid meetings are rough. Here’s how Canada’s tech sector is fixing them 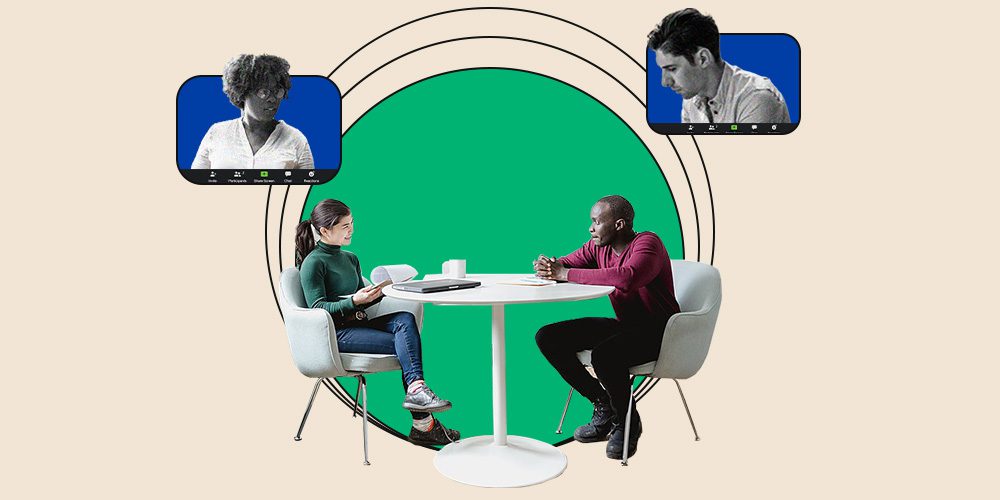 In meetings, the attention death-spiral has many causes — a lacklustre PowerPoint, a colleague’s droning delivery, someone uttering the word “synergy” — but the outcome is always the same: a dispiriting realization that you’ll never get that hour back.

Even before the pandemic turned us all into Zoombies trapped in a video-conferencing loop, meetings were widely acknowledged to be mostly terrible. In one survey from 2019, just 11 percent of workers said all their meetings were productive. The Harvard Business Review even created a calculator that bored attendees could use to tally the cost of meetings based on everyone’s salaries. (One study found a weekly managers’ gathering cost a single organization a whopping U.S.$15 million a year.)

The arrival of hybrid work models threatens to make matters even worse. In a recent survey of Canadian CEOs, 43 percent of leaders said that once offices reopen, most of their staff will be working remotely at least two days a week. Put another way, your next brainstorm will likely feature an awkward divide between a dynamic, in-person group and a collection of disembodied heads and voices working in isolation.

Digital meetings have created countless new ways for awkwardness and disengagement, says Av Utukuri, CEO of Mississauga-based software company Vizetto: “Like when a presenter, oblivious to the fact that half the audience has dropped out and the decision-maker is gone, keeps going.” This raises concerns about the ways in which we collaborate and whether remote workers will become second-class employees.

Still, there are reasons for optimism. The pandemic has prompted a surge of innovation in technologies that aim to make online collaboration feel more natural. Meanwhile, the (partial) return to the office offers a perfect moment to rethink things. So, how can we save ourselves from meeting malaise?

Executives today spend more than twice as much time in meetings as they did 50 years ago — 23 hours a week, up from 10. Couple that with the #riseandgrind mentality of performative workaholism (AKA hustle culture, AKA toil glamour) and you get a whole bunch of people bragging about back-to-back meetings as if they’re a marker of productivity. Spoiler: they’re not, especially when they’re crowded ones.

“There is no way to run a meeting with a big group and have everyone truly participate,” says Chelsea MacDonald, senior vice president of operations at Toronto-based Ada, which provides software that enables brands to automate interactions with customers. “There are always people just nodding their heads.”

To mitigate this, MacDonald addresses attendance head-on with staff. Before launching an initiative, she polls colleagues on who they think should be involved. Then, at the first meeting, she asks those present if they think they really need to be there. At a recent gathering, two engineering leaders chose to bow out, which is exactly the kind of self-awareness MacDonald is looking to encourage.

“I want people to answer honestly,” she says, because being pulled in too many different directions leads to burnout. “I think the right number for a collaborative project is four or five people — you get a diversity of opinions and no one is a fly on the wall.”

Use tech to level the field between participants

The past two years have shown the limits of video conferencing: the glitchy Wi-Fi, well-hidden unmute buttons and PhD-level complexity of screen sharing.

But when employees were remote 99 percent of the time, there was at least a democratization of participation, says Kyra Jones, head of talent at business accelerator Communitech: “We all became the same size of box on a screen.” That goes out the window with hybrid models, which is why she’s curious to see how tech can be used to improve the feeling of connection missing from many virtual exchanges.

Tech companies are promising new tools and features to make hybrid working feel more natural. For instance, Microsoft has tweaked the layout of its Teams videoconferencing system so that the gallery of online participants can be arranged along the bottom of the screen. The idea is that when it is displayed on a TV on a meeting-room wall, the digital attendees will be at the same level as those around the table. This step towards eye contact should make it easier for remote participants to interject and get attention.

For its part, Vizetto is trying to ramp up the engagement and creativity lacking in many online gatherings. With the company’s digital whiteboard software, users can organize and move content while also annotating it. The aim, says Utukuri, is to bring the focus back to storytelling: “As speakers, we need to be visual, dynamic. We really need to stop reading from a deck.”

Jones sees tech’s most important role being one of support for well-designed interactions where everyone feels like they have the opportunity to participate. “Work gatherings then become purposeful, collaborative events and we have a reason to be together,” she says. “If holding a meeting makes sense, that’s great. But match what you do there to the purpose of what you’re trying to get out of it.”

Get some frank feedback

Running an efficient meeting is a skill — and it’s clearly one that doesn’t come naturally to most of us. In fact, academics in Sweden have previously noted that in the knowledge economy, work gatherings have started to resemble group-therapy sessions more than decision-making forums.

“Most meetings are terrible because the discussion lacks focus and there’s no alignment on next steps,” says Kanish Raajkumar, founder and CEO of Sonero, which offers a virtual-meeting transcription tool.

Sonero’s solution is to create a kind of digital coach for people running meetings. Its software compiles action items and talking points from online meetings, but it also provides analytics that look at the gathering’s tone, pacing, energy and sentiment. A meeting-efficiency score tallies whether the group stayed on topic, if the host and the participants were engaged, and how clearly follow-up tasks were outlined. It then provides recommendations on how to improve. The aim is to help managers transform their meetings into participatory, productive uses of time.

After her team held their first hybrid meeting, Jones says they debriefed on what worked and what didn’t. “We dreamed a bit about what hybrid could feel like, and what we would need to make that happen.” (One must: better audio equipment so remote team members could hear and be heard.) While many people recoil from holding meetings about meetings, Jones says such conversations play an important role in helping employees find ways to communicate as effectively with a colleague three time zones away as with the one sitting next to them. “It’s about intentional interactions, purposeful planning in how you interact, and really strong guiding principles for engagement,” she says.

And don’t even think about turning off your camera

One sure-fire way to increase meeting engagement is to ensure all remote participants have their cameras turned on, says MacDonald at Ada. Although verbal check-ins can help, it’s hard for speakers to tell if they’ve lost their audience without the benefit of body language.

There are very few instances in which turning off your camera is appropriate, she says. “Someone rang your doorbell and you need to answer? Sure. Camera off in an all-company meeting with 100 other people is fine. But otherwise, it’s cameras-on, especially in small meetings. Think of the person hosting.”

Utukuri puts it even more bluntly: “You would never show up to an in-person meeting with a paper bag over your head.”