Innovation without borders: Google Hangout with UCSC in Philadelphia 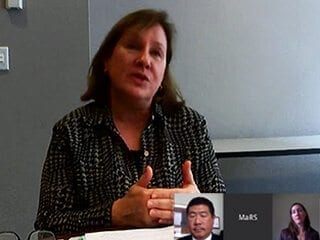 MaRS CEO Ilse Treurnicht recently took part in a live Google Hangout with Stephen S. Tang, CEO of University City Science Center in Philadelphia, to discuss all things innovation on both sides of the border. Kerry Grens, associate editor at The Scientist, moderated the chat.

More than 200 people joined the Hangout, and while the majority of them were from the United States and Canada, people from as far away as Turkey and Greece tuned in.

Here are just some of the topics that were discussed.

Missed the chat? Watch the hour-long Hangout video or check out the Twitter hashtag for the Hangout #ScMaRS.