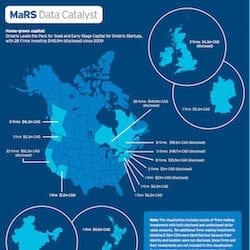 We always hear that Ontario startups are piquing the interest of investors from across the country, continent, and the globe, but the exact geography of that interest is still nebulous.

A few months ago, the MaRS Data Catalyst team dug into AngelList’s data to see the geographic spread of interest in Ontario startups, as measured by the number of “followers” of companies listed on this platform.

This work made the team wonder: Where are the investment dollars actually coming from?

To answer this question, we used Thomson ONE, a database that tracks private equity deals, to generate data about seed- and early-stage[1] venture capital investment in Ontario startups from January 1, 2009, to October 31, 2012. We then used this data to build an interactive chart, which you can find on the Data Catalyst website. We’ve visualized some of the data, developing a map that lets you see the geographic distribution of the investments.

The data, which you can explore in depth on the Data Catalyst website, identifies the location of venture capital firms investing in Ontario startups over that period, the number of firms involved and the capital raised per location. It also offers a list of the venture capital firms that are behind these investments, along with the amount they invested by year.

What the data shows is that Ontario startups tend to get funded locally. Ontario venture capital firms are by far the most significant source of seed- and early-stage funding for the province’s startups, based on both the number of firms and the amount of capital invested since 2009. California ranks second, but its firms have invested significantly less capital: $52.3 million compared with Ontario’s $145.9 million invested over the same time period.

What really made us sit up, however, was the time-based view of seed- and early-stage investing activity. In 2009, just four Ontario venture capital firms invested just under $1 million in Ontario startups; in 2012, however, as of the end of October we have seen 19 Ontario firms making similar-stage investments worth $67.21 million.

One sees a similar trend with California-based venture capital. Just over 60% of that California-sourced seed- and early-stage capital has been invested since 2011, and there has been a significant increase in the number of firms making investments starting in 2011 as well. For Ontario startups this upward trend is encouraging.

Over time, the Data Catalyst team hopes to produce a number of different views of the funding landscape for early-stage startups, including venture capital. What would you like to see? What data gaps would you like to fill?

Please reach out to us with your thoughts and feedback at datacatalyst@marsdd.com.

[1] Thomson Reuters ONE defines seed-stage as an investment strategy involving portfolio companies that have not yet fully established commercial operations, and may also involve continued research and product development. It defines early-stage as funds that make a majority of their investments in companies that have a product development, initial marketing, manufacturing and sales activities already in testing or production. The investments are used by the company to begin production and sales. In some cases, the product may have just been made commercially available. These companies may not yet be generating profits. The companies may be in the process of organizing or they may already be in business for three years or less. Usually such firms will have made market studies, assembled the key management, developed a business plan, and are ready or have already started conducting business.