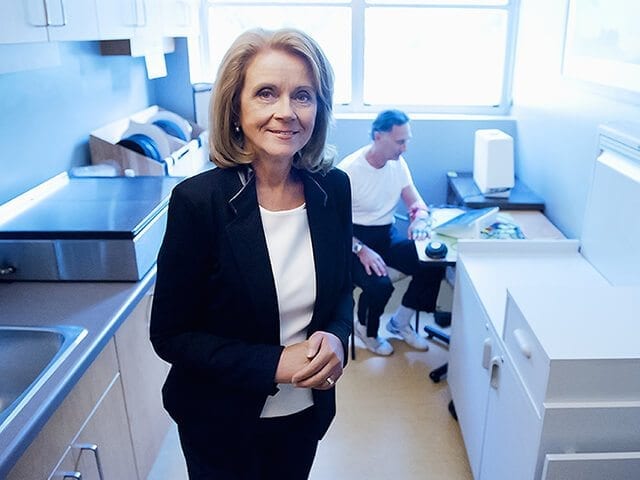 Diana Pliura’s goal is simple, but huge: to help people recover the use of their hands through Mynd over matter.

“It has not been a linear journey,” says Diana, the co-founder and CEO of MyndTec, a privately held medical technology company that is changing the recovery—and, indeed, the lives—of patients whose hands or arms have been paralyzed by stroke or spinal-cord injuries.

“I started with a traditional background, working for large pharmaceutical corporations. I could have gone to another large company or to a startup with eight people. I chose Door B,” she says.

Diana became fascinated with the challenges that MyndTec seeks to meet when she met scientists from the University Health Network’s Toronto Rehabilitation Institute at the annual TiEQuest Business Venture Competition where she was volunteering.

“This scientist from Toronto Rehab was tackling an extremely important, unmet medical need,” she says.

That scientist was Dr. Milos R. Popovic, the Toronto Rehab chair in spinal cord injury research and a professor in the Institute of Biomaterials and Biomedical Engineering at the University of Toronto.

Paralysis is a huge global issue, not only for victims and their families, but also for healthcare systems. Strokes are the leading cause of adult long-term care, costing $36 billion annually in the United States and more than $3 billion annually in Canada, says Diana. About 5.5 million people in the US and Canada live with some form of paralysis, she adds.

Consider Len Vanesch, a top-level graduate of the Ontario Police College who shortly after joining the Ontario Provincial Police was in a horrific car crash that left him unable to walk, talk or use his left arm. Through therapy he recovered his speech and walking ability, but doctors told him his arm would not recover.

After five sessions with MyndMove, a functional electrical stimulation (FES) device, Len’s persistent shoulder pain has reduced substantially and he can now buckle his seatbelt, get dressed, vacuum, do laundry and prepare meals.

Most importantly, he’s become motivated. “I know I can do even more if I keep working at it,” he says.

Focusing on hand function rather than leg function was a deliberate choice, says Diana.

“One of the challenges with a startup is deciding what your product is going to be. Before we wrote our first business plan we spent a lot of time deciding what we were going to focus on before taking our product to market,” she explains.

“There’s no point in being able to walk up to a fridge or a counter if you’re not able to make a sandwich or get dressed in the morning,” she says.

As remarkable and promising as MyndMove’s FES technology may be, commercializing the technology is still a daunting challenge.

“We started that journey after we raised our first round of capital,” says Diana. “The issue is to translate good science to technology. It can be quite complex, with all kinds of hurdles. We need to demonstrate the usability of the technology to a community of therapists.”

This requires ensuring that the FES technology works in sync with MyndMove’s software consistently and effectively to keep patients motivated.

“We don’t have the luxury of a software app developer, where you can show people a game,” says Diana.

The other huge issue is managing the cost of the therapeutic technology for patients.

“Most people in Canada aren’t covered by government programs yet. Right now we’re asking patients to pay out of their own pockets,” Diana explains.

“We’re working with the folks at MaRS on fundraising,” she says. “It’s important to have the ability to have a conversation [about funding] early on, to develop your stakeholders and to tell them what you need them to know about bringing your technology to market.”

It’s worth it, she adds. “The best part of my job is the stories I hear, like the young lady in her 30s practising picking up marbles. Our clients’ success stories are my inspiration. Everyone deserves to have a chance to have this therapy.”