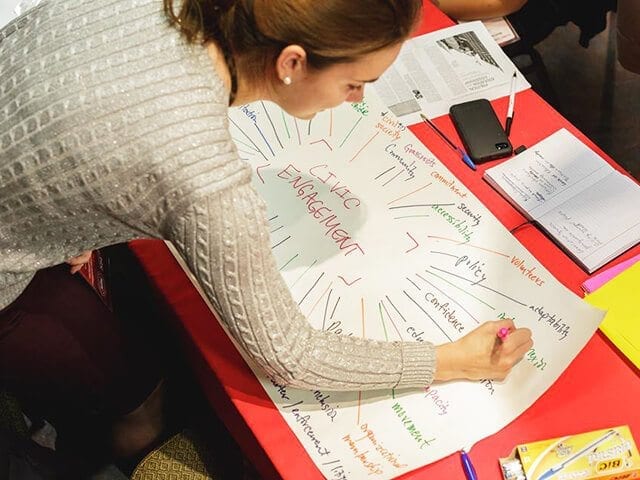 In September, 100 young Canadians met in Charlottetown, PEI for the New Canada Conference to re-imagine Canada’s future as part of Canada’s national celebrations commemorating the 150th anniversary of the 1864 Charlottetown Conference. The conference asked delegates, aged 18-24, to chart a course for where Canada is headed in the next 50 years in eight key areas, including health, energy, technology, civic engagement, social development, justice, the arts and foreign policy.

This month, the conference organizers released the conference “Ideabook”, a report summarizing the issues and ideas delegates expressed should inform Canada’s public agenda over the next 50 years.

Jesika Briones, business development manager for the Advanced Energy Centre at MaRS, was in Charlottetown to facilitate the energy discussion at the conference. Among the issues explored during the session was how Canada’s role as an energy leader will dictate how the country invests in the future, including what energy solutions we invest in and where we do it.

One of the major themes that emerged from the discussions, across all the breakout sessions, was how Canada can better recognize and work with indigenous populations.

“We talked about enabling energy tools for rural and indigenous communities, something that is not often taken into consideration in most energy discussions,” says Briones.

Distributed energy systems are expected to be one of the major ingredients that will help raise standards of living in Northern Canada. Delegates urged for more investment in systems and technologies that address remote communities.

“It’s really powerful to hear this younger generation that is not afraid to talk about controversial issues. Rather than having a central source for energy extraction, we talked about how indigenous communities can manage their own resources and own those assets,” says Briones.

In the Ideabook, delegates provided suggestions to improve Canada’s energy future such as establishing a market mechanism to price carbon emissions, as well as a comprehensive incentives and penalties plan for environmental expenses.

The historical background of the conference was not lost on Briones. In 1864, delegates from the British colonies met in Charlottetown to discuss confederation. Three years later, Canada was born.

Some of the other ideas from the Ideabook include:

Conference delegates were whittled down from 811 applicants from across the country during an open application period earlier this year. The application asked delegates one question: What’s your story of Canada? Peter MacLeod, conference organizer and principal at Mass LBP, says the conference was meant to inspire young Canadians to think about how they themselves can shape the future of their own country, something a previous generation was asked during the 100-year anniversary in 1964.

“It’s easy to forget how we took the country, which was headed on one course, and shifted it in the 1960s,” says MacLeod, referring to the many changes that occurred during the period, including First Nations voting rights, social security measures as well as a new national flag, for example.

“We challenged the delegates not to just think in the boxes they’re often put in. The first thing they said was that Canada is broken in some important and fundamental ways. Now, you could hear that and think, ‘That’s discouraging.’ But the delegates were also saying, ‘It’s broken, we want to fix it and here’s our to-do list.’ That was pretty energizing.”

Learn more about the conference and ideas on how to build a better Canada in the New Canada Conference Ideabook.