One year in: How Canadian startups have responded to COVID-19 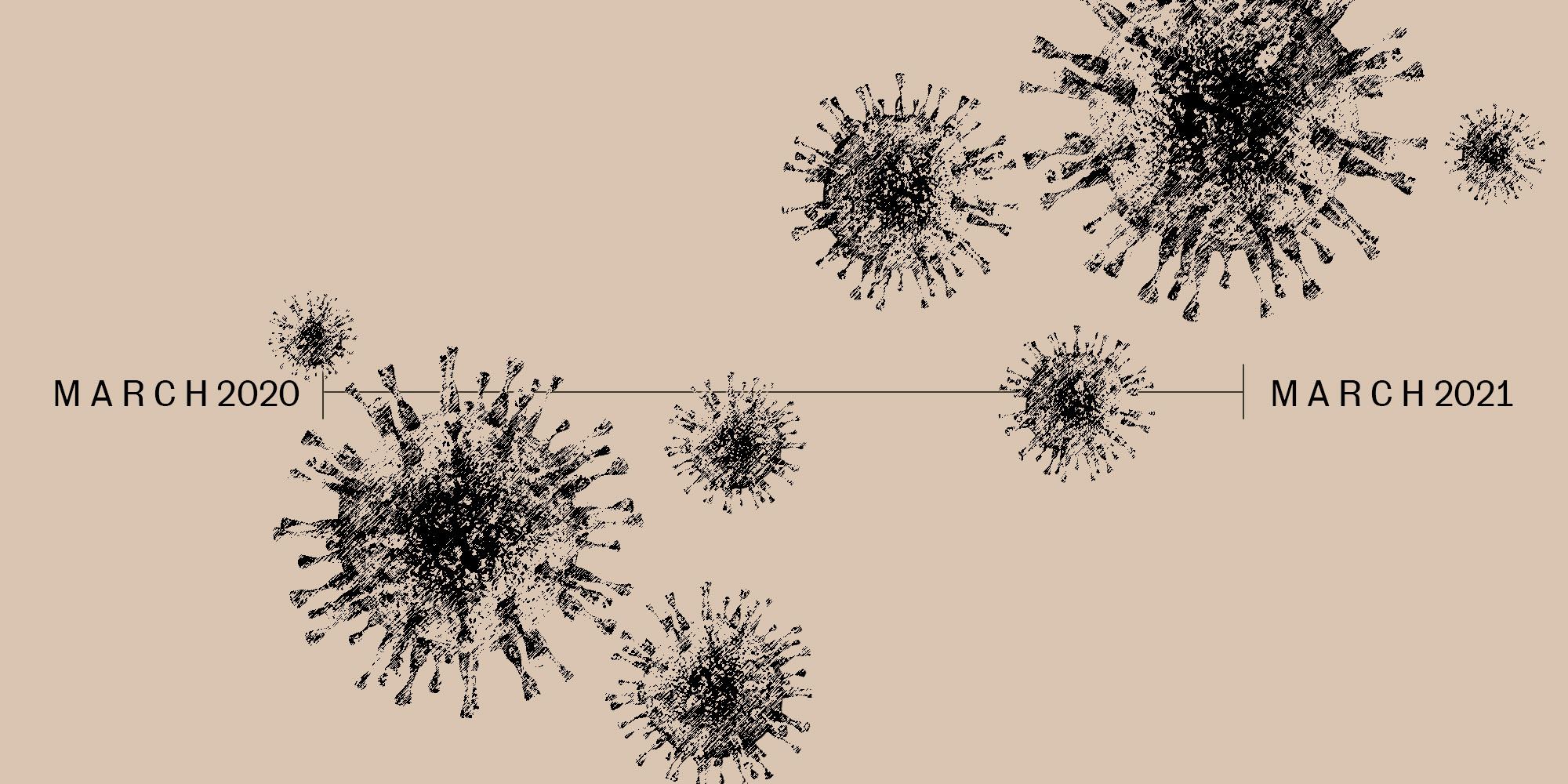 Canada’s tech companies are fighting the coronavirus with everything from mental-health therapy to virus-killing light.

After a full year of rolling lockdowns, economic strife and roughly 23,000 deaths, Canadians are still battling COVID-19. Ottawa has declared March 11 as a National Day of Observance to commemorate the lives lost as well as reflect on the progress we’ve made. “During this crisis, Canadians have remained resilient,” Prime Minister Justin Trudeau said in a statement. “We pay tribute to all those who continue to work hard and make sacrifices in our fight against the virus.”

Canadian startups have been in the fight since day one, many of them pivoting their business plans to solve pandemic-related problems: a mental-health company offering free therapy at the outset of the emergency; a cleantech firm transforming their highway barriers into virus-killing bulwarks; a Toronto-based drug maker on the margins of the next COVID-19 vaccine. Here are a few of the highlights. 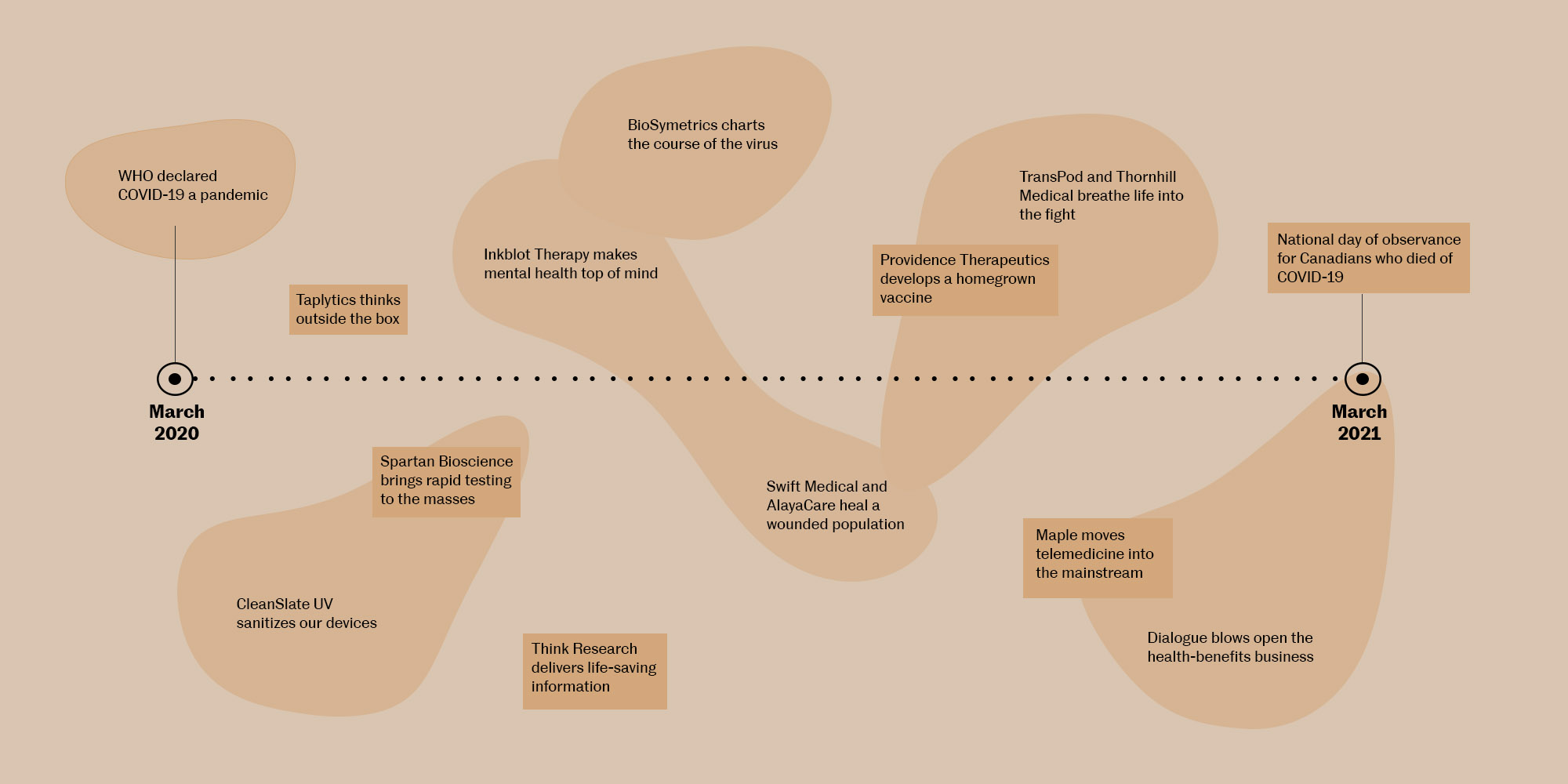 BioSymetrics charts the course of the virus

Since the early weeks of the crisis, drug-discovery firm BioSymetrics has been using its AI tech to search for potential coronavirus treatments. In August, the startup partnered with vaccine maker Janssen to help predict the spread of disease and severity of symptoms in high-risk populations. And in December, BioSymetrics joined the $5.1-million COVID Cloud initiative led by fellow Toronto startup DNAstack. The goal: unite Canada’s greatest genomic researchers to better understand and treat COVID-19 with molecular precision.

Imagine a machine that, using ultraviolet light, could eradicate 99.995 percent of SARS-CoV-2 on mobile devices, as well as hospital equipment, in only 20 seconds. (Oh, and it prompts users to wash their hands, too.) That’s what CleanSlate UV invented, and it’s been invaluable in the war on COVID-19. Before the virus arrived, the startup was mostly selling to American hospitals. Today, CleanSlate UV has clients across sectors in multiple countries — good news, as the smartphone sanitizing game is expected to grow well into the decade.

From March to July 2020, Montreal-based Dialogue secured $43 million from insurance giant Sun Life, grew its workforce ten-fold, acquired companies Argumed Consulting Group and Optima Global Health, and provided health benefits to millions of new users. By January 2021, Dialogue was reporting $60 million in annual recurring revenue; and in March, the company officially filed for listing on the Toronto Stock Exchange. The pandemic dramatically accelerated the adoption of digital healthcare — and it looks like those changes are here to stay.

Inkblot offers affordable virtual therapy for patients dealing with such issues as depression, substance abuse and eating disorders. As clinics and offices shut down at the outset of the crisis, the firm waived fees and provided free meditation sessions. Then demand for Inkblot’s services exploded: the company saw a 10-fold increase in usage, launched two new products and expanded into the United States. In March, the company agreed to be acquired as an independent subsidiary of Green Shield Canada.

Maple moves telemedicine into the mainstream

In September, the remote health company landed a $75 million investment from Shoppers Drug Mart with the goal of making 24/7 virtual diagnoses mainstream. Maple has since more than doubled in size and tripled expected revenues. It now connects more than two million users to 1,500 physicians stationed across the country.

Canada’s slow vaccine rollout has exposed the country’s lack of domestic manufacturing power. Companies such as Providence Therapeutics are changing that. Headquartered in Toronto with facilities in Calgary, the company has developed an mRNA shot currently in human trials. The Trudeau Liberals have already invested $5 million in the vaccine, and the Province of Manitoba has bought two million doses. Providence Therapeutics is proposing a $150-million down payment from Ottawa in exchange for 50 million doses.

Ottawa’s Spartan Bioscience took a huge risk at the beginning of the pandemic. The startup wanted to take its existing DNA tech and create a “lab in a box” for COVID-19 testing. Over several months, its engineering team perfected the system, and now Spartan Bioscience is on track to produce 200,000 test kits a week.

A staggering 30 to 50 percent of all healthcare cases in Canada involve wounds. That means as long as the pandemic continues, millions of Canadians will suffer from a lack of wound care. Startups Swift Medical and AlayaCare are stepping up by founding Telewound Care Canada. The $3.1-million initiative uses an A.I.-powered mobile app that allows patients to capture and share high-precision wound images from home.

Taplytics thinks outside the box

Canadian doctors and nurses are exhausted. They have very little time to rest, let alone comb through medical journals with the latest news on the virus. Toronto’s Think Research is creating digital checklists and organizational tools — based on the latest COVID-19 clinical data and best practices — so that healthcare workers can focus on treating critically ill patients, not paperwork.

TransPod and Thornhill Medical breathe life into the fight

At the beginning of the emergency, there were only 5,000 ventilators available across the country in acute care facilities. Today, the country has 40,000, and we can thank startups TransPod and Thornhill Medical for the jolt. The former applied its research on hyperloop-cabin HVAC systems to build hundreds of new ventilators; the latter partnered with Guelph-based manufacturer Linamar to do the same.