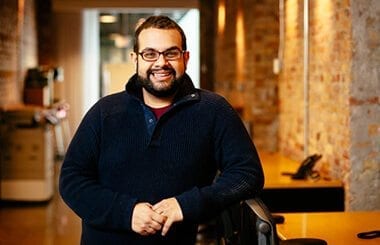 Not so long ago in Toronto, the question “when is the next city bus coming?” could only be met with a helpless shrug or a nod to a dead schedule on a lamppost. But these days, thousands of transit commuters are taking advantage of applications that tell them, in real time, exactly how long they’ll be waiting for a ride. The information that developers access to inform these apps comes directly from the municipal government. Open data, as it’s called, is a promising tool that local and regional governments are increasingly using to make operations more transparent, efficient, and engaging.

The idea that citizens should have extensive access to the information their governments collect and employ is fairly new, and is part of the broader phenomenon of open government. Sameer Vasta of the MaRS Discovery District, an innovation centre in Toronto, says governments are buying into the benefits of such openness. “When we talk about open data, it’s really a subset of open government,” Vasta says. “If you look at open government as coming up with solutions with society versus for society, the sharing of information just makes sense.”

Vasta and his colleagues at MaRS have been working with the provincial government to explore how more government data can be shared, and how the private sector can transform that data into a format the public can use and understand. Vasta calls these private sector developers and innovators the “translators” of open data. Their work has the potential not only to create useful tools for the public, but also to generate significant economic activity and government cost savings.

According to research compiled at MaRS, the open data that informs the GPS industry alone is worth $90 billion (US) annually; the weather data industry in the United States is valued at an annual $10 billion (US); and the potential savings to the U.S. healthcare system amount to $300 billion (US). Innovators who successfully employ open data for useful commercial products are starting new companies and accelerating a new global industry.

Keith McDonald, a web communications staffer at the City of Toronto, is one of the people behind toronto.ca/open, the local open data effort that supplies all that handy transit GPS information. Since 2009, the city has been working with entrepreneurs to find out what information might be useful to them, and has released over 140 data sets on everything from active building permits to food bank visits to licensed child care centres.

McDonald says the city’s role is merely to provide information, not to prescribe how it might be used. “We don’t go out to find out who’s using what, but people often let us know,” he says. The city’s website does feature useful mobile and web apps, such as a Toronto Beaches Water Quality program, and an app that lists locations, links, hours and phone numbers for all branches of the Toronto Public Library.

The city’s open data license says those who can access it are free to use it. “Users don’t have to pay us any royalty or residual – it’s already been paid for by the taxpayer,” McDonald says. His team works closely with the city’s privacy officials to ensure that all open data respects and only discloses information that cannot be attached to individuals. “It’s integral to the process that nothing gets released without being checked first.”

McDonald’s dream is that one day he’ll be out of a job, because all relevant and non-intrusive data the city collects will automatically be added to the open database. But he is aware that most residents will not necessarily start downloading data tables just because they are posted online. “Our long-term goal is to provide data that people could use without a high level of expertise,” he says.

“Some cities are using a tool called Socrata: you take a file, fill in a few boxes, and the tool does the work for you. I think that’s our longer-term vision.”Open data has the potential to help cities operate better and, at the very least, allow its citizens to become more informed and involved. At a more advanced level, it could pave the way for a new level of citizen engagement and economic development by allowing private, government, and public sectors access to information that is sophisticated and open to critical analysis.

Joeri van den Steenhoven, the Director of the MaRS Solutions Lab and a native of the Netherlands, notes that Canada’s attempts to foster open government are still in its infancy. “The discussion here in Canada is still more about the accountability and transparency, whereas the Netherlands is more about information.” He hopes initiatives such as Bike Like a Local, a traffic navigation system for cyclists in Amsterdam, will start popping up in Canada’s urban areas.

Van den Steenhoven has helped create a LinkedIn group of 165 members, a network of peers inside and outside government that want to unleash the potential of open data. MaRS is actively supporting entrepreneurs with data dreams by helping them develop business plans and connect with government officials. Van den Steenhoven believes government can provide data and support, but not necessarily the start-up funds innovators seek to launch open data businesses: “The real risk capital for developing companies has to come from the market, not from the government,” he says.

Government Services Minister John Milloy agrees. His ministry now includes an Open Government Engagement Team, which began its work in late 2013. “It’s about moving away from the idea that government has all the answers.” Milloy says. The ministry recently held “Ideas Camps” in Toronto and Kitchener-Waterloo to find out what data sets entrepreneurs, designers, developers, and researchers want to get their hands on. The hope is that open information can expand well beyond the bus stop, and deliver innovations in health care, finance, education, and environmental affairs.