This company’s photocopier could save your life 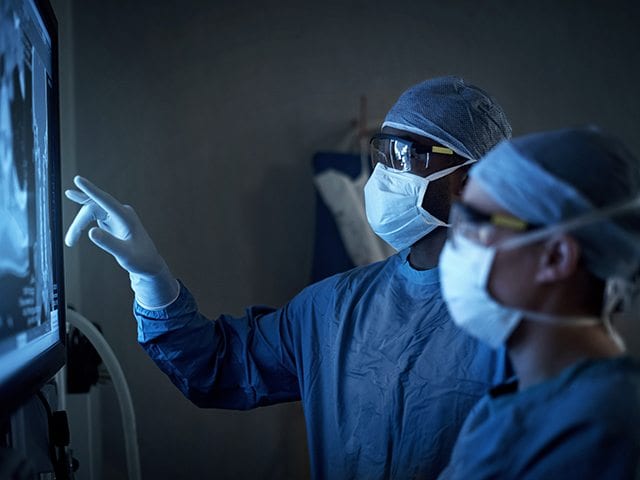 The current gold standard for imaging is in pathology, which usually involves waiting several days while multiple tissue samples are tested to determine whether the surgeon cut out enough tissue. But what if surgeons had access to images of the tumours they were operating on — images they could assess while still in the operating suite? Such images, if paired with standard healthcare techniques, would enable surgeons to make more informed and efficient decisions about what to cut and what to leave behind.

This is the idea behind Perimeter Medical Imaging, a Toronto-based company that’s developing and testing an optical tissue imaging system that allows clinicians (including surgeons, radiologists and pathologists) to visualize tissue samples in near real time, making diagnosis much more efficient.

CEO Paul Weber describes Perimeter Med’s tech as a “photocopier for removed tissue” because it quickly provides a series of images that clinicians can sift through, similar to the multiple images taken by an MRI machine, but without the long wait time. This full imaging system can be used directly in the operating room. As soon as tissue is excised it can be placed on the scanner for real-time imaging, making it a valuable complementary tool to the standard of care.

However, Perimeter isn’t just developing a sophisticated medical photocopier — it’s also gathering vast libraries of tissue images and planning the next phase of its technology, which would use machine learning and artificial intelligence (AI) to assess them.

Paul explains, “AI tools that interpret patterns will be a big part of the future.” Once the AI program assesses the tissue samples, it will give clinicians a better sense of their various patterns and structures, information that can also be used to train new clinicians.

Although Paul knows the importance of AI, he acknowledges that AI systems will only support the human clinicians making the final assessment. In the end, technology like Perimeter’s will enable surgeons, radiologists and pathologists to be as efficient and effective as possible.

Getting into the market

Perimeter is collaborating with top clinical sites in the US and Canada — including Mount Sinai and Memorial Sloan Kettering Cancer Center in New York, MD Anderson in Houston, Minnesota’s Mayo Clinic, and Toronto’s Princess Margaret Cancer Centre. The goal is to launch commercially in late 2018 in the US, and then to seek clearance in Canada and Europe.

Getting a jump on the funding hurdle at RESI on MaRS

When discussing his challenges as an entrepreneur, Paul admits that his hurdles are common among startups — especially those in the health sector. “Most of us will say that the biggest challenges are resourcing, both in terms of talent and finances,” he says.

This is where events like RESI on MaRS, Canada’s largest health investor conference, come in. A past attendee, Paul says that unlike many other conferences, RESI enables attendees to set up face-to-face meetings with potential investors, rather than just pitching from a podium. But he advises attendees to put in the work beforehand: know who you want to meet with and do your research to find out which investors or contacts would be a good fit for your company and stage of growth. Paul and the Perimeter team — RESI Innovation Challenge first-place winners — developed lasting relationships with industry connections from around the world at RESI.

The next RESI on MaRS conference takes place in Toronto on April 10, 2018. To learn more and register, visit RESI on MaRS.