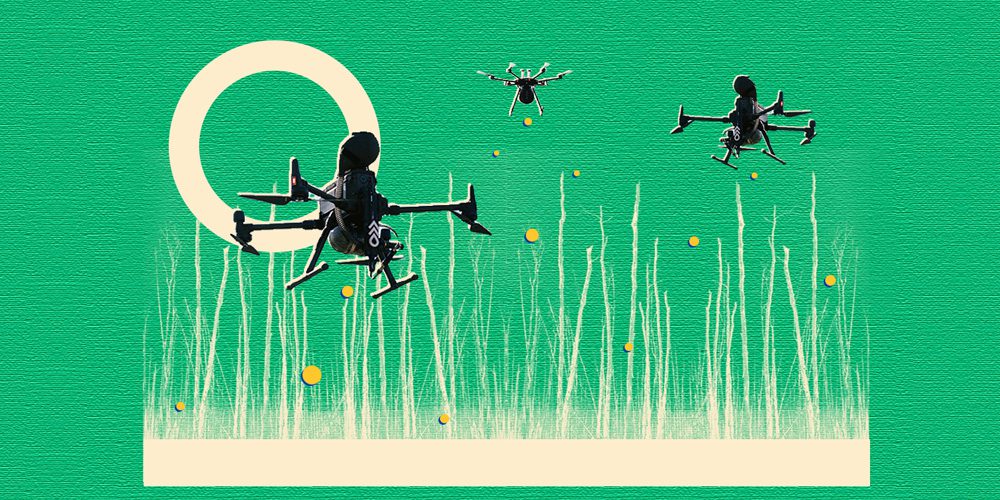 By the end of this summer, 44,647 wildfires had burned 5.6-million acres of land in the United States. In Canada, 6,317 fires devastated 10.34-million acres — combined that’s the equivalent of all of Nova Scotia and Prince Edward Island being burned to the ground. In British Columbia, where more than 40 fires raged, the small town of Lytton was nearly wiped out.

There, after record-breaking heat — as high as 49.6 C — flames destroyed 90 percent of the town, killing two and injuring several others. Property, crops, resources were obliterated in about 15 minutes.

Deforestation — by clear-cutting or wildfires — has massive repercussions both on climate and health. But leaving reforestation to Mother Nature can take decades, particularly as catastrophic wildfires are increasing in frequency and intensity. And the time, cost and manual labour involved — not to mention the shortage of people who are signing up to do that labour — makes traditional methods of tree planting not as viable an option as they once were.

Bryce Jones knows how hard it is to replant forests. For four months in 2013, he worked as a tree planter throughout British Columbia and northern Alberta, during which time he planted 76,000 pine, spruce and fir trees. “There’s no technology there — it’s just bags and shovels,” he says. “The only way you can automate reforestation is through the air.”

Jones had been an entrepreneur since he was 18 and knew he wanted to do something related to the environment. He had a biology degree from the University of Victoria and lots of ideas, but it wasn’t until 2019, when he was working toward a diploma in electromechanical engineering technology at George Brown College, that he hit on the one that he thought had potential: use drones to fire specially formulated seed pods into the ground — at 10 times the normal rate and costing 20 percent less than traditional methods.

“It struck me as something that could have the largest impact on carbon emissions, could be done right away and was the most scalable,” he says. He proposed the idea to his brother, Cameron, now COO, and their friend Angelique Ahlström, now CSO and Flash Forest was born. His first goal as company CEO: plant a billion trees by 2028.

The team took out a loan, bought a drone and used 3D printers at Jones’s school to make casts of the pods.

“We made a rudimentary deployment system that we mounted to the drone that could prove the concept,” he explains. “We made 3,000 pods and planted them in Southern Ontario.”

Now, only two and a half years later, the company has a fleet of drones — some to do aerial mapping, others to plant — with each able to carry several thousand pods per flight. Three operators work in a field, controlling five drones, creating higher-skilled summer jobs. Flights take 15 to 20 minutes, and the deployment rate is good, Jones says. The target now is 100,000 pods per field unit — but, he adds, they can and will do better.

Flash Forest couldn’t have come along at a more crucial time. In August, the Intergovernmental Panel on Climate Change issued a report that U.N. Secretary-General António Guterres called “a code red for humanity.” The IPCC concluded that if atmospheric temperatures increase more than 1.5 C over the next decade, the consequences will be catastrophic — this year’s wildfires just a hint of what could be coming.

One thing that would help stabilize the climate, the report said, would be to increase the global forest by one billion hectares. Indeed, about 26 percent of annual greenhouse gas (GHG) emissions stem from the destruction of carbon-rich ecosystems, such as forests, grasslands and wetlands, explains Faisal Moola, associate professor of geography, environment and geomatics at the University of Guelph.

“The destruction of forests and other carbon-rich ecosystems essentially makes a bad problem much, much worse,” he adds. “We really risk setting off what some people have referred to as a carbon bomb, where all of the carbon that is locked up in our ecosystems suddenly gets released into the atmosphere as a consequence of fires, clear-cut logging and other types of disturbance.” And because these ecosystems draw carbon dioxide out of the atmosphere and store it away, they can act as “hedge or a handbrake against runaway climate change,” as Moola notes. 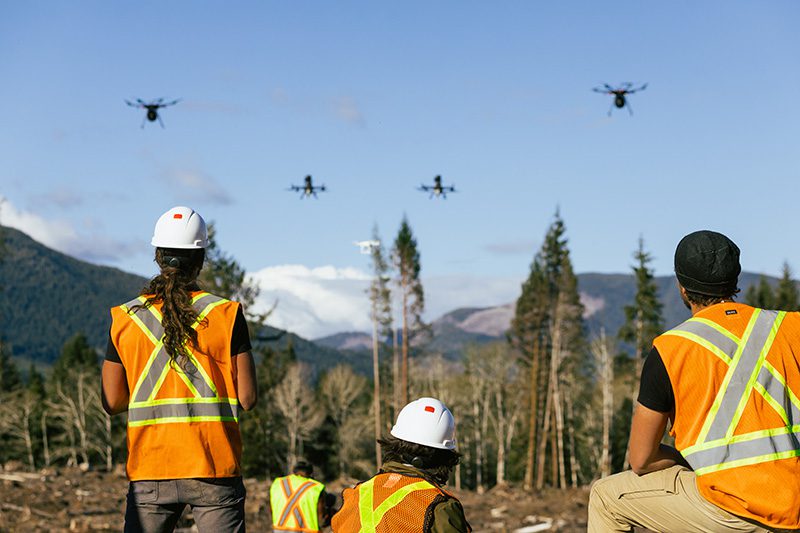 Flash Forest’s big draw — and its big trade secret — is its seed pod, which contains everything seedlings need to maximize germination and promote survival, including nutrients, predator deterrents, moisture retention capability and a fungus called mycorrhiza. And its technology allows them to reach post-burn sites or remote areas that are difficult for traditional tree planting.

There are challenges every day, Jones says, as they work to refine the engineering, hardware, software and seed-pod recipes. Then there are the challenges presented by the climate — this year, record temperatures, record wildfires and drought. “That was something that was totally out of our control,” he says. “No matter how prepared we were, in one of the wettest regions in Canada, we had 42 C and no rain for a month.” Still, as the climate gets hotter and drier, Flash Forest can plant species that are more adaptive and resilient.

Unlike some traditional, tree-farm forms of reforestation, where one type of tree is planted row upon row “like broccoli,” as Moola says, Flash Forest is focused on biodiversity. That is one of the aspects that really excites Moola. “They diversify their seed pods so that they don’t just include a tree seedling but also other types of co-occurring plants that are biocultural, that have significance not just for biodiversity, but also for cultural purpose, particularly for Indigenous people,” he says.

In the meantime, the company now has 20 employees and is growing. It’s completed more than 20 pilot plantings, all over B.C., northern Alberta and central Ontario, and is scaling up significantly for spring with several larger pre-commercial contracts to plant trees in the tens of thousands to hundreds of thousands. The team is also gearing up for pilot projects in the Netherlands and Hawaii. “It’s wild, just seeing the scale of growth, going from our apartment to having two warehouses and a greenhouse and raising tens of millions of dollars,” says Jones. “It’s very surreal.”

The technology is still relatively new, but more and more customers are curious to explore the opportunities it presents. The company has federal and provincial funding as well as corporate sponsors — mostly Fortune 500 companies that are trying to build out their corporate social responsibility platforms. Flash Forest will also be starting a Series A investment round over the next few months.

For Jones, the target of planting a billion trees by 2028 is just the beginning. “I envision the company planting on six continents — everywhere where our technology is needed,” he says.

​​
Flash Forest is one of 10 companies in Mission from MaRS, a special initiative that’s working to tackle the global climate crisis by accelerating the adoption of new solutions.

Good data can help stop climate disasters before they happen