Pressure gauge: The future of weather is in your back pocket 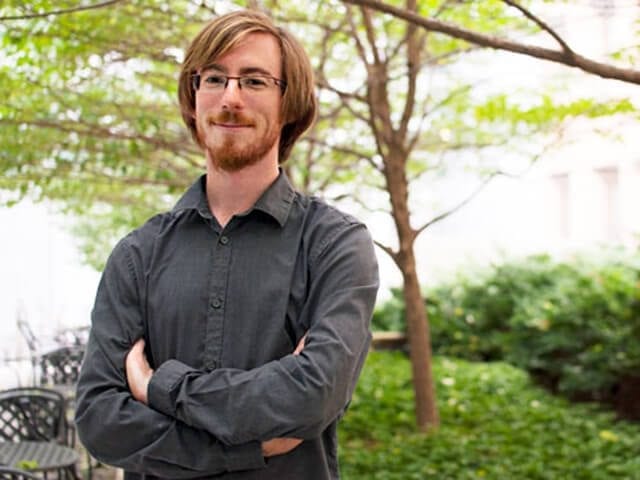 Crowdsourcing for weather may seem like overkill – after all, if you want to know what it’s like outside, you can always look out the window. But one Toronto-based computer engineer wanted an even more accurate assessment of that immediate, hyper-local question.

“It’s sunny where I am today, and it’s probably sunny where you are,” says Jacob Sheehy, founder of the new weather app and MaRS Discovery District startup, PressureNet. “But that’s not always the case. Sometimes within Toronto, it will be raining in one place and not in another. But the official weather forecast really doesn’t differentiate, it’s not that high resolution. So one of the things that I tried to solve is, for a specific person that has a smartphone moving around the city, what’s the weather like?”

Current weather alerts tend to denote what is happening at the airport—that’s generally where measurements are taken. But if you’re across the city, that doesn’t solve the question of whether to bike or taxi to the party to avoid getting caught in the rain. Sheehy designed PressureNet to address this.

New Android tablets and smartphones (as well as iPhone 6) contain an internal barometer. So, at any given time, the barometric pressure of each device can be read and sent to PressureNet’s servers. Barometric pressure can be a remarkably efficient indicator of impending weather fluctuations in the short-term, and it’s consistent both indoors and outdoors. People who install PressureNet on their phones are essentially walking weather stations, passively collecting data that can be used by researchers and meteorologists to more accurately predict the weather in any given area.

The bulk of our current weather forecasts comes from government models, which are typically run by the US government and the EU. These models run physics algorithms on data collected from the observation centres to try and predict the future. Weather companies take this enormous amount of data and meteorologists then interpret it and communicate it to the rest of us.

“The two primary ways to measure all of this is through satellites and radar,” says Sheehy. “We also have weather stations that collect rain. So the important metrics are pressure, temperature, humidity, wind speed and direction, and precipitation. You can measure other things, too—light, UV radiation, cloud cover, cloud type—there’s a whole bunch of things. But the core components that drive the whole system are: What is the pressure like, what is the wind like, what is the temperature, what is the humidity.” If the system could be fed barometric pressure readings from all of the smartphones in use, all over the world, Sheehy believes we can provide “a revolution in accuracy. And that’s the goal, we want more accurate weather forecasts.”

PressureNet is free to use, and it’s starting to gain traction among weather nerds, climatologists and atmospheric scientists. At least one researcher, Cliff Mass, believes that barometric pressure readings gathered from smart phones can be a significant boon. The University of Washington Atmospheric Sciences professor gathers about 115,000 pressure observations each hour—the bulk of them coming from PressureNet.

“I wrote a paper about it that’s going to be in a bulletin in the American Meteorological Society about this whole idea of using pressure. I’ve done some numerical experiments with my graduate students and we’ve actually shown that it improves the forecast. The main implication for this is the shorter term forecast, which is probably the most important horizon for us in my field. Particularly with severe weather.” Mass thinks that, if a major storm-front can be predicted even 15 minutes earlier, the potential benefit for people and property can be enormous.

The app has limitations, of course. PressureNet relies on people actively installing it onto their devices—it cannot collect readings without permission.

“There’s probably 30 million phones in North America that have pressure readers,” says Mass. “We’re only collecting an extraordinarily small amount of them. We have to get more of these observations.”

For the average user, the major gain in using PressureNet is the satisfaction that comes with being an active contributor to a scientific effort. Users can track weather patterns using PressureNet’s hi-res maps and animations. They can also receive alerts from other PressureNet users (almost like a weather-only Twitter feed) who are nearby.

“Our users are finding when they get a notification saying it’s cloudy or clear, that it’s typically more accurate than what their weather app says. It’s not a fault of the weather app, its simply that no one else has measured whether it’s cloudy or sunny where our users are,” says Sheehy.

Pittsburgh resident Dustin Diesing started using the app after reading about it on the online community, reddit, in 2011. “I’ve always been interested in weather and meteorology so this was my chance to join into something like that. I have the software installed on three devices, one updates every minute and I have submitted recordings 500,000 times so far.” In addition to receiving fairly accurate alerts on weather fluctuations nearby, he gets a kick out of this idea that we can use smartphone data “to predict the seemingly random things that happen on a given day.”

But the really exciting part of their platform, Sheehy insists, is not that they’re just collecting data from smartphones, it’s that “we’re distributing that data to scientists and researchers. The data is stored on our servers, and if you’re a climatologist or an atmospheric scientist, or if you’re a researcher at a university, you can sign up and pull our data feed of the atmosphere and run experiments on it or do whatever. We have this full-circle platform.”