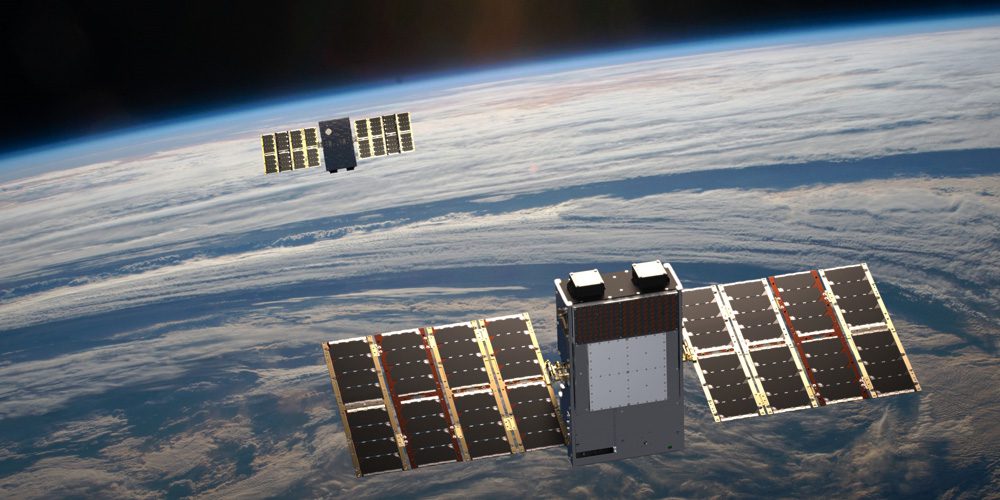 Homegrown tech companies such as Montreal’s GHGSat are literally launching innovations into the heavens to track the planet’s emissions.

The four-storey, red-brick office building at 196 Spadina Avenue in Toronto doesn’t look like the place you’d think of when hearing the words “satellite factory.”

But here, on the third floor, is a 5,000-square-foot satellite-production facility belonging to Kepler Communications, one of Canada’s most buzzed-about satellite startups. Just 10 metres up from the sidewalk, technicians solder satellite components, assemble them in a clean room equipped with filters to eliminate dust or other particle contamination, and test them in a small vacuum chamber used to simulate space itself.

Of the 15 Kepler satellites currently zipping through low-Earth orbit, 12 were built here. To Kepler marketing director Nathan Robinson, the mini factory is emblematic of what he calls “the new space economy.”

“It wasn’t long ago that a typical satellite was about the size of a bus, and took 10 years and hundreds of millions of dollars to build and launch,” says Robinson. In the past decade, however, shrinking technology has made satellites cheaper, smaller and lighter. Kepler’s are CubeSats, about the size of a large cereal box, built mostly with off-the-shelf components. Launch costs, as well, have fallen dramatically. In the 1980s, the Space Shuttle delivered commercial payloads, including satellites, to orbit for more than U.S.$50,000 per kilogram. Today, a launch on SpaceX’s Falcon 9 rocket costs about $2,000 per kilogram.

The result has been a global explosion of new satellite startups and applications: earth-imaging for academic, commercial and government purposes; internet-of-things connectivity; environmental monitoring and far more. 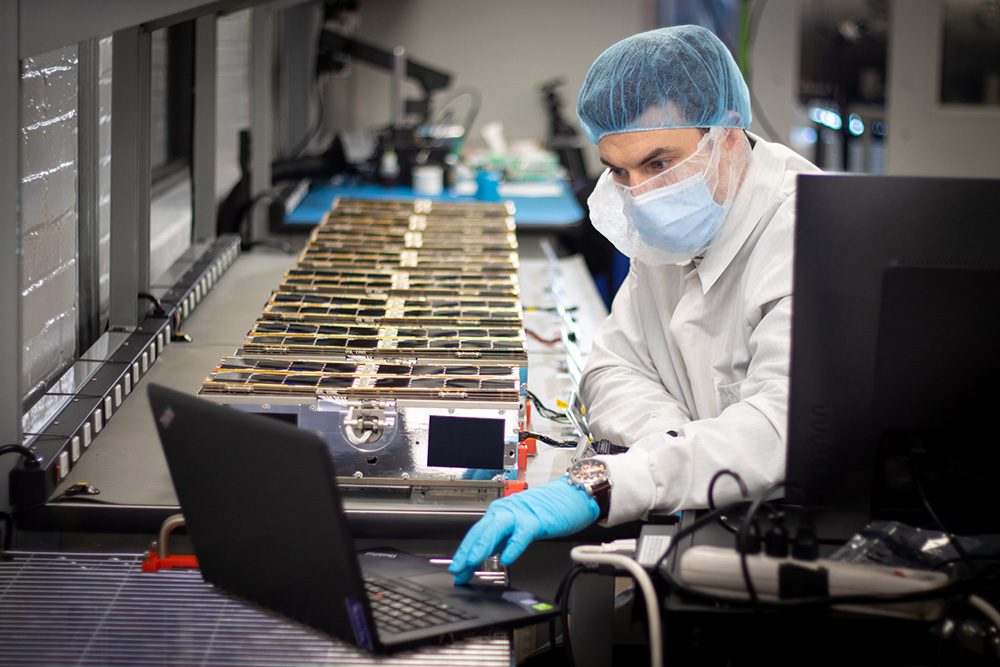 But in Canada, things are a bit different. Kepler’s downtown Toronto facility remains an anomaly, and the number of Canadian companies with ambitions in the stars remains relatively small.

“We are absolutely losing market share to the rest of the world,” says Ryan Anderson, a space industry consultant and founder of the Satellite Canada Innovation Network. “And it’s simple why: we’re losing it to countries that have better-developed national space strategies.”

That smallness is especially unfortunate, says Anderson, because there is the kernel of a robust space and satellite sector in Canada — one which could become a lot bigger with the right support.

“There are a lot of motivated, smart people working on incredible ideas here,” says Anderson. “The trick is to keep them here.”

In the early years of the global space race, Canada was a (relatively) major player. It was the third country to launch a satellite (the Alouette 1 in 1962) and the third to launch a commercial telecommunications satellite (the Anik A1 in 1972). And in subsequent decades, Canada built a reputation for excellence in space robotics, just look to the Space Shuttle’s famous Canadarm.

But in the 21st century, as the global space race was defined less by competing superpowers and more by a proliferation of private players, Canada lost its footing.

“We’ve had some great CubeSat teams from various universities, and we’ve got some startups doing well for themselves,” says Stéphane Germain, president of Montreal’s GHGSat, which equips satellites with spectrometers to monitor Earth’s surface for methane and carbon dioxide emissions. “But proportionally to what we’re seeing in the United States, in Europe, we aren’t keeping pace.”

Which isn’t to say there aren’t any exciting or innovative companies in Canada. Germain points to Edmonton-based Wyvern, which plans to offer “hyperspectral” satellite imaging, which captures imagery across more bands of the colour spectrum than the human eye can see, and has potential applications in environmental monitoring, resources exploration and agriculture.

There’s also NorthStar, based in Montreal, which is planning a 52-satellite constellation — a group of satellites, working cooperatively to cover a broader area of Earth’s surface. It aims to address a problem created, ironically, by the enormous proliferation of orbital objects and space debris. Its satellites will scan low-Earth orbit for stray objects, in an effort to prevent collisions. And Telesat, the former crown corporation founded in 1969 — which launched the Anik series of satellites — is aiming to develop a broadband-internet constellation of more than 1,600 satellites, putting it into competition with similar plans by SpaceX and Amazon.

GHGSat itself is one of the most oft-cited players in the Canadian industry. Germain founded it in 2011, after Quebec and California created a joint cap-and-trade carbon market, and it became apparent that big emitters would have a real financial incentive to keep their emissions down. “This was just at the time when small satellites were beginning to be capable of some really fancy things,” says Germain.

Germain shopped his concept to potential clients, securing enough early investment to launch a microwave-sized demonstration satellite in 2016. His clients today include oil-and-gas companies, waste-management outfits seeking to control landfill emissions, and even Hydro-Québec and Manitoba Hydro, which use it to monitor emissions from hydro reservoirs.

GHGSat’s close eye on emissions hotspots has also helped uncover serious emissions offenders. In 2019, its technicians noticed enormous methane leaks in natural-gas fields in Turkmenistan; and in 2021, a plume of methane from a landfill in Pakistan. This November, at the COP26 climate conference in Scotland, the company announced that it would contribute data to the United Nations’ International Methane Emissions Observatory.

Another domestic standout is, of course, Kepler, which focuses on providing high-bandwidth connectivity to customers — such as resource-exploration companies or scientific expeditions — which have big data needs in remote locations. In 2019, Kepler provided data services to a German research icebreaker that was to be intentionally frozen into arctic waters for 12 months. As it drifted, icebound, scientists and instruments aboard the vessel collected new and otherwise inaccessible data about one of the world’s remotest environments. Without Kepler’s products, the data would have been locked on board for a year as the vessel drifted, inaccessible to colleagues and scientists on land.

Kepler has approvals in hand to build out its satellite constellation to 140 devices by the end of 2024, and it’s planning a second constellation of 360 satellites. But for now, it only has 15 in orbit. That still makes it the largest satellite operator in the country — a reflection of how far the industry still has to go. 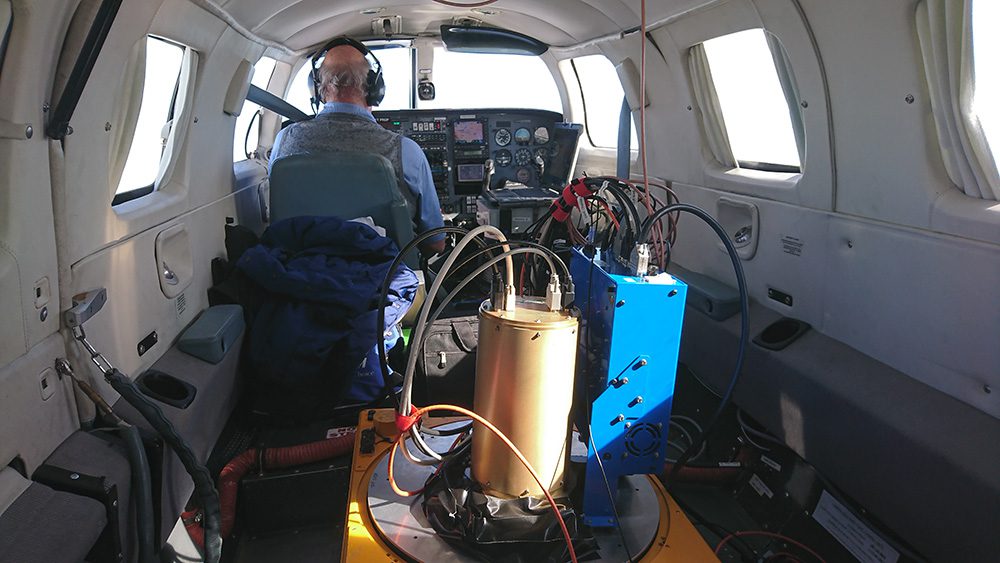 All of these organizations have one important factor in common: they’ve all identified a global market, which has been critical, both for finding potential customers and funding. Anderson, Germain and Kepler’s Robinson identify Canada’s relatively shallow pool of venture capital as a major obstacle to companies seeking to commercialize new satellite applications.

“The American market for venture capital is much more advanced,” says Germain, “and it’s relatively easy to pick up and move to the U.S. So, there’s an element of that.”

Indeed, most of GHGSat’s venture financing has come from sources outside Canada — though the venture has also received grants, including a recent $20 million from the federal government, which came via funding earmarked for companies fighting climate change. Canada provides funding for new space companies through a variety of channels, including the Canadian Space Agency’s space technology development program, which in 2020 and 2021 awarded $23 million to 40 companies for space-related R&D. But industry observers feel that commitment could go further.

“One refrain we hear often is that the difficulty in Canada is not securing early-stage funding, but getting your first client,” says Andre Dupuis, president and CEO of Space Strategies Consulting Ltd., which provides expert advice to industry and government. “And you will hear space companies in Canada express this frustration that they’ve developed some product with interest from around the world, but when asked if their own government is buying it, the answer is ‘no.’”

Anderson says this has been changing recently, with federal space-investment dollars more tied to supporting Canadian enterprises. But he would like a government strategy that combines seed funding and procurement with a big-picture space strategy.

Both Anderson and Robinson point to Britain as a possible example for Canada to follow. Its Catapult program works to bridge researchers and industry in various sectors, including the satellite industry. It connects startups, researchers, academics and funders, and provides shared manufacturing facilities and other resources for use by small-scale companies.

Germain suggests this kind of big-picture thinking could go a long way toward moving Canada beyond what he calls our “collective underdog-ism” — a willingness to be content occupying a few market niches, without making our own bigger play for one of the world’s fastest growing industries.

Kepler’s Robinson concurs — and would like to see a day come soon when his company’s downtown satellite factory isn’t such an anomaly.

“Canada has to decide: Is this a game where we’re going to be active, or not?” Robinson says. “There is certainly lots of talent in this country. I’d really love to see more companies than just Kepler and a few others carrying this flag forward.”

On average, our ventures generate more revenue and create more jobs than the rest of the economy. We call this the “unfair MaRS advantage” — see how we make it happen.

What cleantech leaders need to know about generating carbon offsets

Collaboration over competition: How six rival entrepreneurs united to grow their companies