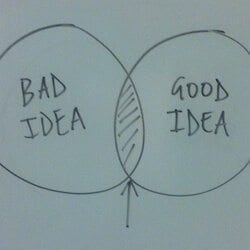 There’s a frontier mentality in California. During the 1849 gold rush, San Francisco’s population increased from 1,000 to 25,000 in one year. Travellers were hungry for gold and, in the process, cobbled together innovations that we still use today: Levi’s jeans, pneumatic drills and dry martinis.

Today San Francisco and the Silicon Valley area to the south of the city form the single-largest region of innovation in the world. The frontier mentality that first brought people there is the same mentality that pushes entrepreneurs to their next big idea.

“We’re looking for ideas that seem like bad ideas, but turn out to be good ideas,” says Geoff Lewis, principal at Founders Fund. “There’s a sweet spot here,” he says, drawing a rough Venn diagram on a whiteboard during a recent trip. “We’re looking for really disruptive ideas.”

Founders Fund invests in things like rocket ships. Not high-potential web startups with fast growth, but literal rocket ships, like the ones developed by PayPal founder Elon Musk’s SpaceX. The Founders Fund—and the Venn diagram Lewis drew—are an expression of the frontier mentality of Musk’s one-time colleague Peter Thiel.

Pitching to investors in Silicon Valley is an exercise in flexibility for entrepreneurs. One Silicon Valley insider recently asked a MaRS client to turn around his laptop so he could see the PowerPoint deck he was about to launch into. He flipped through the deck in about 30 seconds and proceeded to ask questions. Speed, clarity and creativity are not luxuries in the Valley: they are necessities.

During that same trip we met more inspirational investors at Fort Mason Center in San Francisco, an old complex of factories used to store munitions during the Second World War, when California was literally the Western frontier of North America’s war in the Pacific.

The investors at Social Capital Markets 2012 are at the forefront of an entirely new class of investment: impact investing, where financial sustainability must blend with social impact.

MaRS’s Centre for Impact Investing was a sponsor of the conference and—fuelled by rich Californian coffee—brokered conversations all week with leading-edge thinkers on how to scale double or triple bottom line companies.

Back in Palo Alto, we met with NewSchools Venture Fund (NSVF), a not-for-profit venture capital fund with money from John Doerr, Reed Hastings and the Bill and Melinda Gates Foundation. NSVF has a unique mission to scale education innovations in charter schools, private enterprise and not-for-profits.

In the AOL building across town, home to Stanford University’s StartX incubator, we met Goalbook, a startup that announced this week a $915,000 seed round led by NSVF. Their loft offices are a Silicon Valley cliché: ping-pong tables, free Chinese food, beer on tap, even a band rehearsing in the corner.

Goalbook has their eyes set on disrupting the K to 12 education system, making it easier for teachers to track and teach students with learning disabilities. They seem to be channeling Peter Thiel himself: “Find a frontier and go for it.”