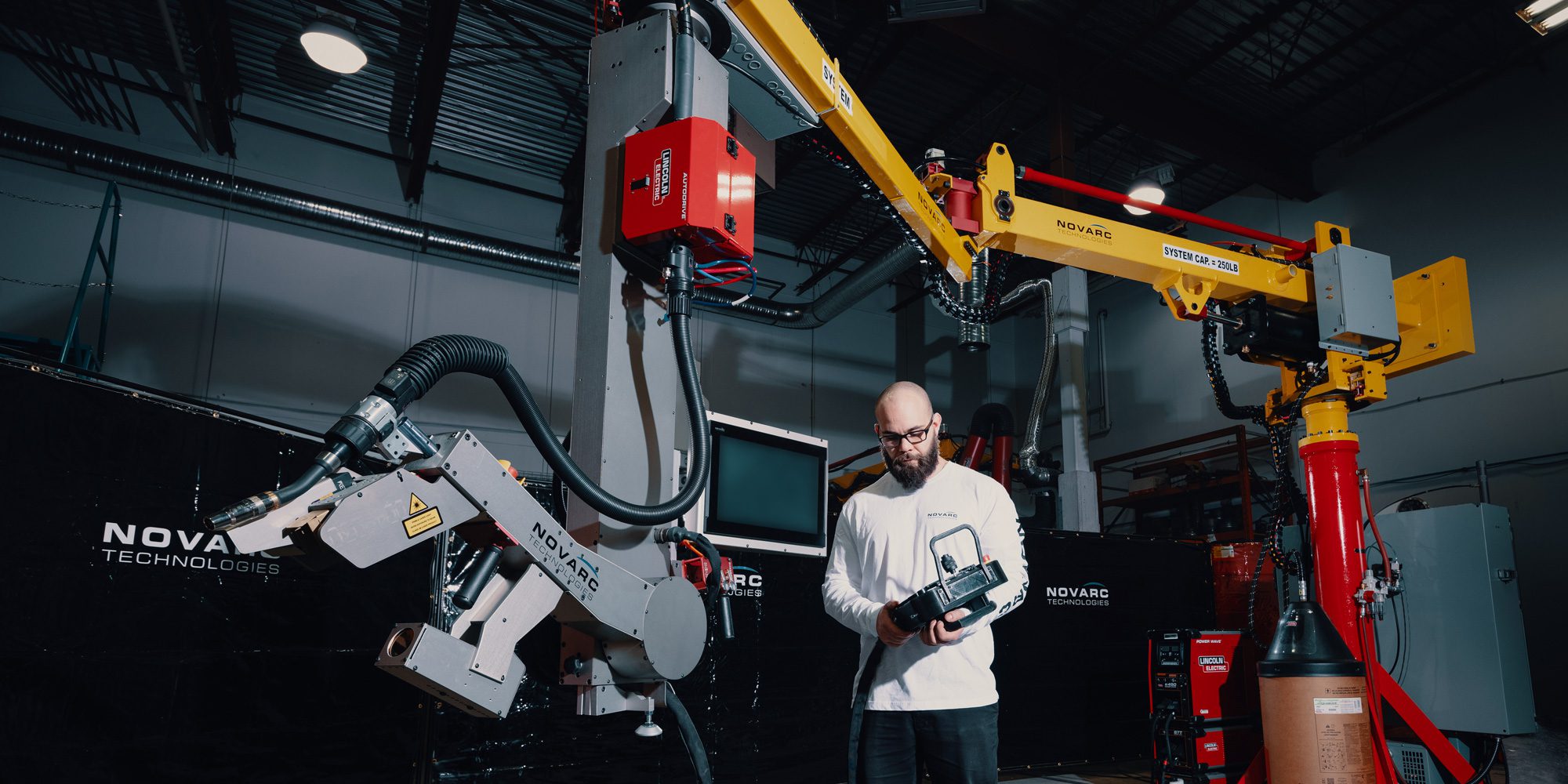 While it’s true that technology has historically displaced jobs, today’s smart machines are saving workers from boring and dangerous tasks — and creating new jobs in the process.

Two things can be said about human beings: we like building machines, and we tend to freak out about the machines we build.

The Luddites of 19th-century England, an oath-based secret society, looked to the industrial era and saw not liberation but destitution. The most radical among them formed paramilitary groups to raid textile factories and destroy knitting machines and mechanical looms — devices that would replace workers. Their political descendants include the lamplighters of early-20th-century New York who went on strike to protest the advent of electric streetlights, and the switchboard operators who acted against the rotary dial system of Bloomington-Normal, Illinois, in the 1930s.

Did predictions of automation and mass joblessness come true? Yes and no. Labour-saving machinery has proliferated at an astonishing rate, and entire professions — like those forsaken lamplighters and switchboard operators — have gone the way of horse-drawn carriages (and the coachmen who drove them).

But while we enjoy more abundance than ever before, it’s not as if we have more free time. It turns out that humans are remarkably adept at creating new types of work: managerial, analytical and consulting jobs. If the mechanical looms and electric streetlights and automatic telephone exchanges didn’t bring mass joblessness, is it likely that the new class of robots will be any different?

To be sure, robots have begun doing things they couldn’t do before. They can move boxes around a factory floor. Collaborative robots — or cobots — can work side-by-side with humans, responding intuitively to their movements. And robots outfitted with A.I.-powered vision systems can collect and analyze extraordinary amounts of data to spot manufacturing defects long before such flaws become visible to the naked eye.

Could it be that this time — unlike all the other times — the doomsayers predicting the end of work are right? There’s good reason for skepticism.

Robots do work that people don’t

Here’s the thing about many of the tasks that today’s robots perform: they absolutely suck. There’s a great deal of nostalgia for the lost manufacturing jobs of the post-war era, but people espousing such sentiments tend to focus on specific kinds of labour — construction work or assembly-line tasks in storied Detroit automotive plants. The characters in Bruce Springsteen’s songs lay bricks and build Cadillac parts, but they never suit up and stir a giant vat of cow manure to turn it into fertilizer. Some work is hard to romanticize.

“The industrial world is looking to automate dull, dirty or dangerous tasks — things that are notoriously bad for people to do,” says Matt Rendall, CEO of Clearpath Robotics, a Kitchener company specializing in product design for custom robots and autonomous vehicles. In the 12 years since its founding, Clearpath has helped create robots that inspect nuclear facilities, extract and analyze samples from toxic tailing ponds, and haul boxes in a third-party-logistics warehouse in Texas, where indoor temperatures regularly hit 45 degrees Celsius.

“That kind of work can grind on a person,” says Rendall. “If somebody has to choose between it and a food-services job for the same pay, they’ll take food services every time.”

Today, even skilled manufacturing jobs can be hard to fill. “The American Welding Society predicts a shortage of 400,000 welders by 2024,” says Soroush Karimzadeh, CEO of the Vancouver startup Novarc Technologies. Demand for pipe welders — a high-precision job, akin to painting with molten metal — is growing, thanks to the thriving construction, shipbuilding and oil-and-gas industries, and yet boomers are retiring and millennial welders aren’t moving in fast enough to replace them. (It can take apprentice welders a decade to become proficient.)

To address this labour shortage, Novarc has developed the Spool Welding Robot (SWR), a vision-guided mechanical arm with an integrated control system. To run the machine, an operator selects the welding recipe — based on the size, thickness and materials of the pipes being conjoined — and lets the robotic arm take over. Because it is precise and unencumbered by repetitive-motion strain or muscle fatigue, the SWR is three to five times more productive than a human welder. Yet it can’t handle the most intricate welds, which must still be done by people.

Rather than replacing workers, the SWR is making optimal use of already scarce human resources. “The technology frees people up,” says Karimzadeh, “to do more artisanal or interesting welds, rather than tedious work they don’t enjoy anyway.” 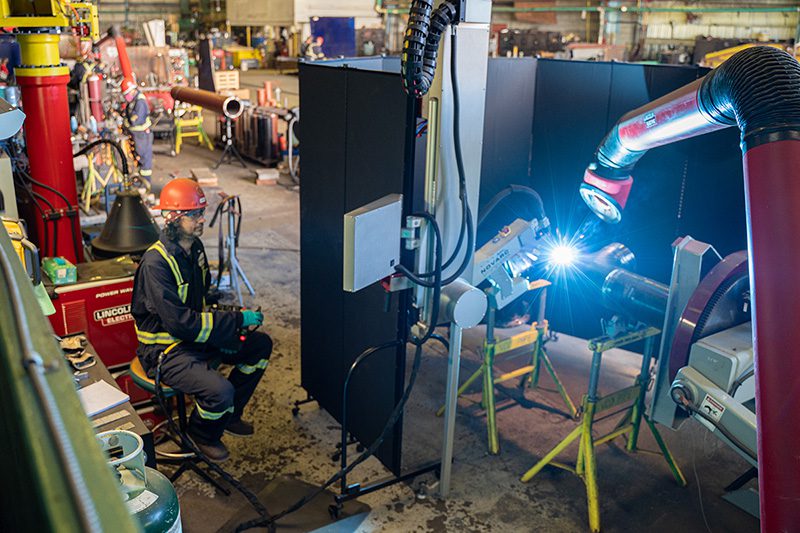 Even advanced robots often require human operators. In the past, such operators were skilled technicians equipped with years of training or an engineering degree. The person operating a robot was therefore unlikely to be the same person whose job the robot displaced. But all of this is changing.
“Today, robotics is being democratized,” says Etienne Lacroix, CEO of Vention, a Montreal- and Berlin-based startup. Vention, as it happens, is in the democratization business. In the past, if you were a producer seeking to automate your plant, you’d have to write up a detailed report and send it to a systems integrator who would fabricate the robot parts, write custom software to sync up the various operating systems, and build out your factory floor over the course of months.

Vention offers a DIY, plug-and-play alternative. Clients log on to the Vention site, design their own robots using an intuitive drag-and-drop interface, and then press the “buy” button, at which point the company ships out their order along with IKEA-style assembly instructions. Vention components are pre-selected to be compatible with one another, saving buyers the expense of a systems integrator, which can comprise nearly half the cost of a new robot kit.

But it isn’t just robot design that Vention and other like-minded companies are democratizing; it’s operations, too, which can now be controlled by simple consoles or touch screens. Within a day, a line worker can be upskilled to a machinist. That’s why companies that deploy Vention technology often retain their workforce. “The bar for adoption is much lower than it was 10 years ago,” says Lacroix. “It’s no more complex to operate a robotic palletizer today than it is to operate a tablet or smartphone.”

Of course, robots are desirable because they’re efficient: they can do more work for less money than the average human can. It seems obvious, therefore, that an overall increase in the number of robots should bring a corresponding decrease in the number of jobs. The Luddites figured that, if industrial looms produce more textiles than humans can, textile workers must surely be doomed.
But such predictions assume that there’s some kind of hard maximum on the number of textiles an individual can acquire. In reality, though, people today are happy to buy many more carpets, linens, pants and shirts than they did 200 years ago. That’s why automation in the textile industry resulted not in fewer textile-industry jobs, but in a higher number of affordable textiles.

“If automation is being added to your industrial process, you’ll increase productivity and strengthen your company,” says Jason MacFarlane, leader of the advanced manufacturing cluster at MaRS. Such advancements enable you to offer goods at competitive prices, bolstering sales — and ultimately profits. You might use some of that additional cash to design new products, move into new markets, develop your supply chain, launch an advertising campaign or further scale up production. All of these endeavours create jobs.

MacFarlane points that, in such a scenario, some labour displacement is inevitable. “Many new jobs will be different,” he says. “Low-value jobs may be taken away and added as high-value jobs in other places.” This fact alone points to a strong argument for a generous welfare state that supports workers and enables them to upskill and retrain. It doesn’t point to an argument against robots or the high-value jobs and productivity gains they bring.

The most critical task our new class of robots performs is also the most prosaic: autonomous walking. “Paying people to walk is the lowest-value thing you can pay them to do,” says Rendall, of Clearpath Robotics. “But most of what humans can do with our intuition and dexterity is still hard to replicate with automation. As a society, we should want our workers to be using their hands, eyes and brains.”

The pitfalls of corporate venture capital — and how to avoid them

14 Canadian tech entrepreneurs to watch in 2023