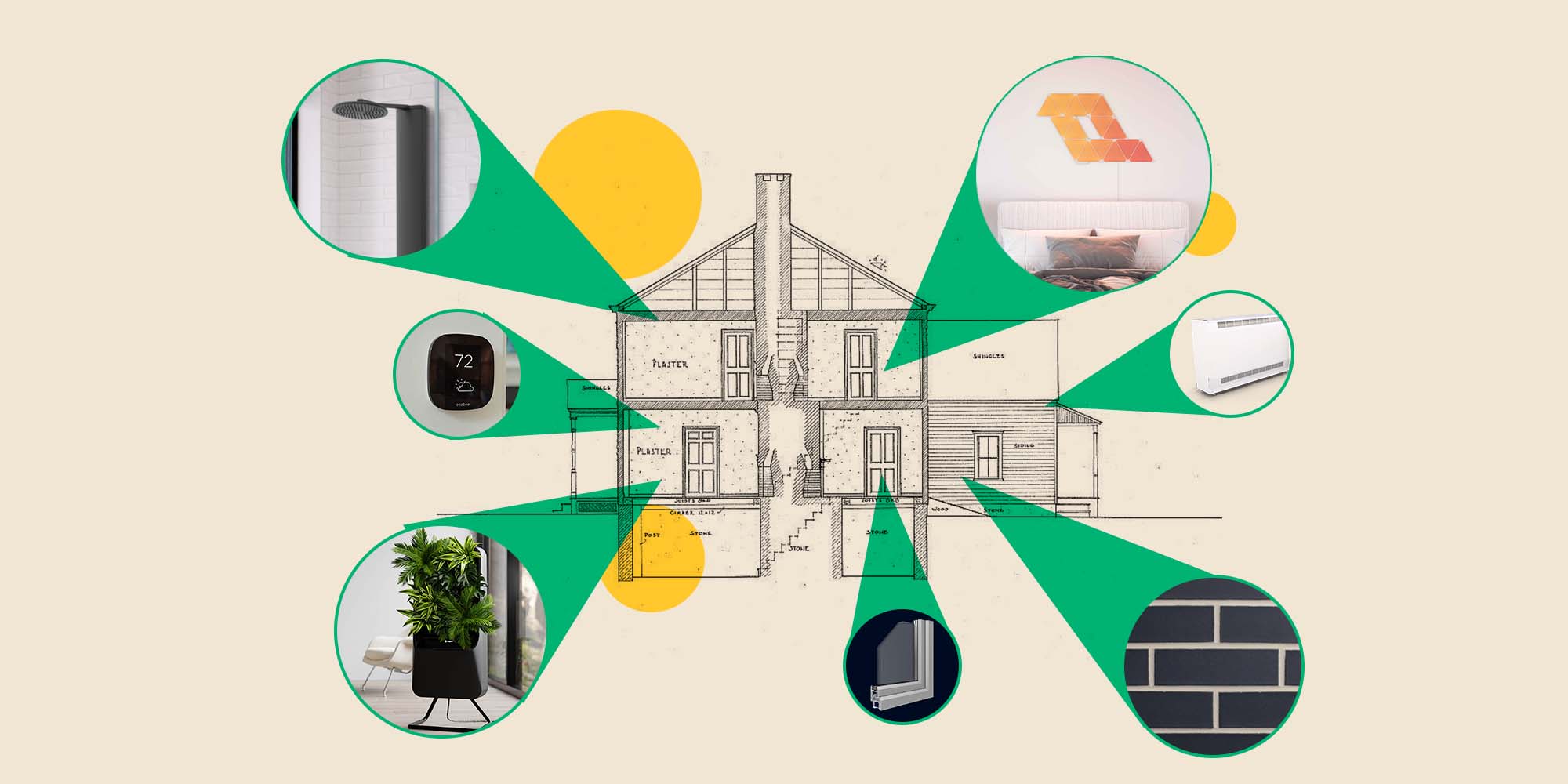 When tackling the huge problem of climate change, there’s no shame in starting small — in fact, Prime Minister Justin Trudeau encourages it. In May, Ottawa announced the Canada Greener Homes Grant, a $2.6-billion program that doles out up to $5,000 to homeowners seeking energy-efficient retrofits for such things as solar panels and new windows. The program is part of the federal government’s larger climate-action plan, and a tacit suggestion that regular citizens can and should help the country reach its ambitious net-zero goals.

Buildings are a great start since they’re some of Canada’s worst polluters, representing 13 percent of the country’s greenhouse-gas emissions. That’s more than heavy industry and the agriculture sector, respectively — a daunting fact. But there’s already a big market of affordable, homegrown innovations for the environmentally inclined. (Did you know that installing a smart shower head saves up to 80 percent on water consumption and as much as $700 a year?) And as the City of Toronto looks to intensify its environmental regulations for buildings, real-estate developers can take note of these products and programs for new towers and retrofits.

Here are 10 ways that tenants, homeowners and builders can make residences greener.

Train your house: smart devices for safety and sustainability

Whether you’re single or surrounded by family, taking care of a home takes a lot of work. But today, you can train it to lend a (digital) hand. Consider Ecobee and its suite of high-tech helpers: a thermostat that saves up to 26 percent on annual energy costs and adapts to your routine; a security camera with high-resolution, 180-degree vision that doubles as a smoke detector; and sensors that track occupancy and manage temperature based on whether windows and doors are opened or closed. All of these gadgets have helped the Toronto-based venture earn the 2021 Energy Award for Innovation in Technology.

Save your drinking water: no more waste down the drain

“It just doesn’t make sense to be flushing away good drinking water,” says Mark Sales. “Especially given the ongoing scarcity and increasing costs of water in many regions.” That’s why Sales and his business partner John Bell (a former home renovator and TV sports broadcaster) founded Greyter Water Systems, a Barrie startup that repurposes shower and bath water for toilet flushing and irrigation. Greyter’s systems are best-suited for developers looking to increase the value of land when building new homes while making them sustainable over the long haul. The tech is small and can be installed in new builds within two hours. The systems are also energy-efficient because, as Sales puts it, “it’s wrong to be a water conserver and an energy hog.”

Clean your conscience: shower heads that save water and energy

In 2019, the average three-person household in Toronto consumed 630 litres of water per day, with approximately 50 percent of that going down the bathroom drain. So, imagine a shower head product that saves 80 percent of water and energy, while also tracking savings in real time. That’s what Alisha McFetridge created with RainStick, another Toronto smart-home firm on the rise. “In the past, clean technologies got a bad rap for being expensive and unattractive,” McFetridge explains. “We wanted to make a bang with our performance and esthetic.” Get ready to feel the waves of that accomplishment. RainStick recently was a finalist at the Interior Design Show’s prototype pitch competition, and preorders begin this September for 2022 delivery.

Stay cool: windows that shade themselves

For the past three years, Curtis Berlinguette, a professor of chemistry and chemical and biological engineering at the University of British Columbia, has been developing a novel way to make smarter windows by using electrochromic coatings — materials that change colour and transparency when fitted with electric voltage. Miru, the startup he founded, makes striking windows that can be electronically tinted for homes and automobiles. Energy-efficient, voice-activated and connected, Miru’s windows can protect your place from the sun’s heat while providing privacy. Most uniquely, Berlinguette’s tech doesn’t block pleasant views. “I look around Vancouver and 70 percent of the windows have closed blinds,” he says. “Once these windows take off, blinds will be things of the past.”

Living walls are damn cool. They’re also expensive and hard to maintain for the average city dweller. Dylan Robertson co-founded Respira to bring the health and beauty of the outdoors to urban residents. “Canadians spend about 90 percent of their time indoors, despite the fact that air quality is five times better outside,” Robertson says. “This tech allows people to advance nature while also controlling it.” At the core of Respira’s walls is biofiltration, a natural process that helps clean the air. The systems are hydroponic, too, which makes the plants harder to kill. The startup also offers accessories, such as planting kits, nutrients and grow lights.

Some people look at heating units and see heating units. Fredericton’s Stash Energy looks at them and sees climate progress. The company builds air-source heat pumps that store energy in off-peak hours, resulting in 70 percent cost savings compared to heating-oil systems. The machines look like traditional units and are as quiet as air conditioners. The plan is to eventually partner with utilities around the world to control the equipment remotely when demand fluctuates. A recent U.S. $250,000 investment from the Wells Fargo Innovation Incubator should help the cause.

Guide the grid: thermostats working from the ground up

Recommended by IGN, Forbes and The New York Times’ Wirecutter, Mysa makes smart thermostats for electric-baseboard heaters, electric in-floor heating and air conditioning. The company’s tech allows users to manage and schedule energy consumption through their phones or other devices such as Alexa and Google Assistant. Powered by A.I., the thermostats also take note of geolocation and zoning when calculating the most efficient course of action. Headquartered in St. John’s, Mysa recently launched its third product for North American customers — a thermostat designed to control ductless mini-split heat pumps, windows and portable air-conditioning units.

Heat it up: tankless water heaters with unlimited supply

Working in natural gas, wind and solar, Énergir is one of Quebec’s largest utilities, serving 200,000 customers domestically, and more than 300,000 in Vermont. Homeowners, though, should pay attention to the company’s tankless water heaters. Compact and cheaper than electricity and fuel oil, these devices provide a virtually unlimited supply of hot water, instantly heating it on command, resulting in roughly 96-percent energy efficiency. Énergir also offers grants of up to 30 percent for businesses looking to switch to natural gas.

You’ve likely seen Nanoleaf’s gorgeous LED lights by now, either at a coffee shop, as part of an art exhibition, or in your friend’s apartment. The company’s newest product, Elements, is meant to recreate nature’s awesome healing power within your four walls. Layered with a plastic surface that looks and feels like wood, the lights have settings that can mimic campfires and the ethereal glow of light bouncing off ocean waves. Because the panels are more advanced and customizable than Nanoleaf’s previous products, Elements comes with a premium price tag ($370). However, you can still expect the same degree of sustainability: the lights use very little electricity and have a lifespan of about 25,000 hours.

Take it in: solar panels that mix style and substance

After years of subsidies and the hard work of scientists and engineers, solar panels are now actually pretty affordable. And thanks to startup Mitrex, they’re now actually pretty, too. The Toronto-based company makes photovoltaics that resemble beautiful materials such as timber and marble. This transforms buildings into virtual power plants — key to saving money and relieving the grid. To put that into perspective (according to Mitrex’s calculator), a 50,000-square-foot condo built in Ontario and clad in such tech could generate something like 12.4 million kWh over 30 years.

Learn more about the game-changing solutions that can tackle the effects of the climate crisis at MaRS Climate Impact, a virtual conference being held November 30 to December 2.

Oil is on its way out. But electric batteries can also be dirty and dangerous