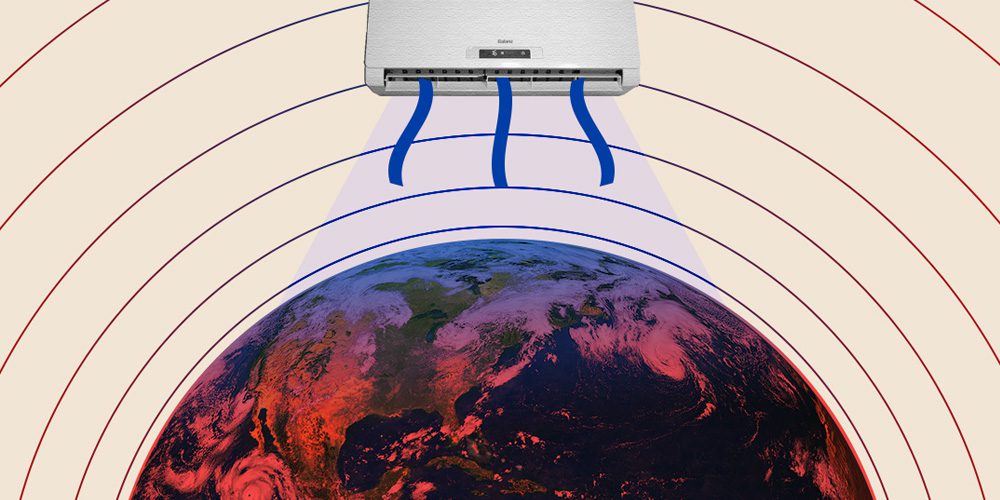 Smart thermostats and low-carbon cooling solutions are just some of the technologies that consumers are beginning to adopt.

Climate change is driving the air-conditioning industry to come up with energy-saving innovations, as more frequent bouts of extreme weather is forecast to put added strain on the power grid.

Canada has already seen average temperatures rise by 1.7 degrees Celsius since 1948, according to Environment and Climate Change Canada. That trend will continue for decades, with scientists predicting hotter summers on average and more frequent blistering heat waves. The recent record-breaking temperatures in British Columbia — 47 heat records broken on June 29 alone — underscore the urgency.

Without a greater emphasis on conservation and innovation, rising demand for air conditioning will require more electricity supply on a grid that is also going to need to power a greater number of electric cars and buses. People are going to need ways to protect themselves from extreme heat, without requiring costly new electricity generation which would drive up carbon emissions and exacerbate climate change. To put it bluntly: we’re going to need to develop ways to stay cool while using less power.

Innovative Canadian companies such as Waterloo startup Evercloak, Winnipeg’s GEOptimize and Toronto’s Ecobee are part of a global race to introduce this technology. Whether it’s reducing the energy demands of air conditioning units, installing heat pumps that replace traditional AC and can cool the air as well as warm it, or offering “smart” thermostats that save energy by automatically adjusting temperatures and fans to a homeowner’s preferred comfort levels, it’s clear we’ll need a multi-pronged approach.

In a recent study, the Colorado-based Rocky Mountain Institute estimated that the combination of population growth, rapid urbanization and a warming planet will drive a threefold increase in the number of residential air conditioners in service over the next three decades.

“Although increased access to cooling positively impacts the health, well-being and productivity of people around the world, it comes at an environmental cost that we simply cannot afford,” the report’s authors said.

The institute teamed up with the government of India and the international consortium Mission Innovation on a Global Cooling Prize. The co-winners of the $1-million-U.S. prize, announced on April 29, are two consortia led by Japan’s Daiken and China’s Gree Electric Appliances Inc., both of which built prototypes of air conditioners that would have one-fifth the impact on the climate of standard units. The groups — led by two of the largest residential AC manufactures — have committed to producing commercial models or their prototypes by 2025.

In Canada, Evercloak is spinning out nanotechnology research from the University of Waterloo to develop innovative ways to manufacture membranes that improve the efficiency of cooling units. Co-founder Evelyn Allen and her team are finessing the process of manufacturing graphene-based membranes that filter water from the air before it is cooled. These membranes — each one thinner than a strand of hair — are able to block air flow but let water vapour to move through. This means an air conditioner would require less energy and building owners could use a smaller unit to cool indoor spaces. Energy efficiency gains are significant, Allen says, and can see a reduction up to 78 percent in energy expended in hot, humid regions. The venture is currently working with traditional AC manufacturers to commercialize this technology.

Last year, Evercloak was one of 10 winners selected for funding for Natural Resources Canada’s Breakthrough Energy Solutions Canada program. It has also won support from Next Generation Manufacturing Canada, the industry-led organization behind Canada’s Advanced Manufacturing Supercluster. In terms of developing tactical approaches to tackle climate change, “the solutions are here and our technology is part of that,” Allen says.

While AC manufacturers are looking for greater efficiency, there is a move afoot to simply replace traditional units with ground-source heat pumps, which take advantage of ambient temperatures deep underground to cool buildings in summer and heat them in winter.

Ground-source heat pumps are expensive to install but operating costs are lower and paybacks can come in as little as four years, says Ed Lohrenz, president of GEOptimize and a registered trainer for the International Ground Source Heat Pump Association. If soil and rock conditions are favourable, it can cost between $5,000 and $10,000 to install an underground heat exchanger, while prices for the heat pumps in the home are roughly similar to the combined cost of a conventional furnace and air conditioner, he says.

GEOptimize designs ground-source heat pump systems for large residential and commercial customers, often installing systems that are shared among several buildings. Lohrenz’s company has worked on a seven-tower condominium project for Mattamy Homes in Oakville and the East York Civic Centre for the City of Toronto.

“CO2 emissions are becoming a bigger factor for many of our clients,” says Lohrenz. Increasingly, companies are looking to lower their climate impact and this trend is likely to continue to rise. The state of Minnesota, for example, has just passed legislation requiring companies to report their carbon emissions.

While it costs more to install a heat pump than a traditional furnace and central AC, the federal government is providing some assistance — up to $5,000 for home retrofits that would reduce energy consumption. That includes up to $50 off the cost of a smart thermostat. Many utilities, meanwhile, also provide rebates on such purchases.

Toronto-based Ecobee is a North American leader in “smart thermostats,” which calibrate a building’s heating and cooling based on occupancy and variable electricity prices. The Ecobee thermostat can control temperatures to avoid big increases in power usage when electricity demand and prices are at their highest. And it can also adjust for wide swings in retail power prices, which can be common in jurisdictions with a lot of renewable energy, like California.

The use of a smart thermostat can shave some 26 percent off a homeowner’s heating and cooling costs, compared to a static setting at 22-degrees, Ecobee founder and CEO Stuart Lombard says. (And its smart thermostat is getting even smarter: the company is releasing the first voice-controlled thermostat that can be accessed on Apple’s Siri device later this year.)

Energy efficiency can be the cheapest source of greenhouse-gas emission cuts, Lombard says. “It’s something tangible that the energy consumer can do that is accessible and meaningful,” he says.

Indeed, finding more efficient way to meet our energy needs — whether for cooling buildings in summer or heating them in winter — will be essential if the world is going to meet the common goal of averting the worst impacts of climate change.