The 13 biggest takeaways of Collision From Home 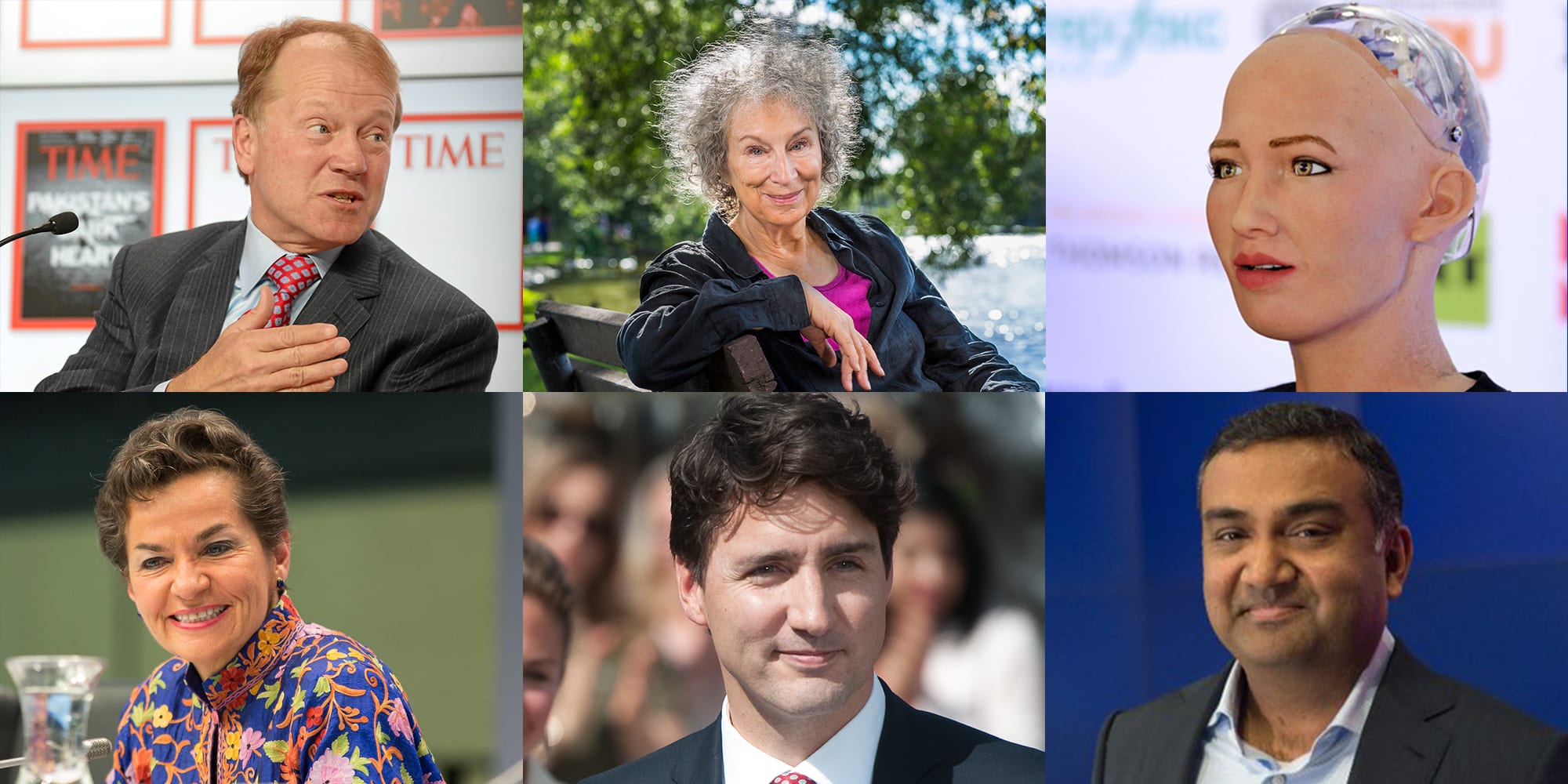 This year’s virtual conference offered everything from robot wisdom to a warning from Margaret Atwood.

For many in the Canadian tech ecosystem and beyond, Collision from Home was their first experience with a fully digitized multi-day conference. And while there may have been a few bumps at the beginning, with more than 450 speakers, Collision managed to pack an impressive amount of information. Leaders, innovators and journalists from some of the biggest names in tech talked about everything from maintaining a healthy mental headspace during isolation to issues of systemic racism and climate change.

Here are some of the highlights.

Margaret Atwood isn’t completely nihilist in her outlook. “I do believe there will be a future,” she said in conversation with New Yorker editor David Remnick. “We’re not done yet.” But the author of The Handmaid’s Tale and Man Booker Prize winner for The Testaments, tempered her cautious optimism with a bit of a warning:

“How things are maintained and what keeps a structure in place and what causes it to crumble is endless fascinating to me. Any emergency is likely to be exploited by a group seeking power. That is just a recurrent motif of human history. We will however see a certain amount of, ‘We need to control you more for your own good,’ and the danger of that is once they’ve controlled you ‘for your own good,’ there’s a likelihood that will slip over into controlling you for their good.”

Spotify wants advertisers let their creativity show — or be heard

“How much more valuable are your eyes than your ears?” — this was the rhetorical question posed by Spotify’s chief content and advertising business officer, Dawn Ostroff, when discussing the platforms’ recent deal with big-name podcaster Joe Rogan. The platform is working hard to prioritize podcasts so that listeners can find all of their content in one place — and so they can give marketers a unique offering. Announced earlier this year at CES, Spotify’s platform is now able to pair visuals, sound and deeper targeting to let advertisers reach their ideal audience.

Ostroff, who has first-hand experience in seeing the industry doubt the likes of digital video, said that she’s beginning to see advertising leaders change tune as more unified metrics are introduced.

“What we’re trying to do is bring the podcast industry into the future.”

“It’s hard to find someone who’s so dedicated to this space. He’s built an audience over many, many years…’ @Spotify‘s @DawnOstroff over on Channel 2 discussing the streaming platform’s decision to sign an exclusive partnership with Joe Rogan’s podcast 🎵 pic.twitter.com/cCmrtGrfON

The gig economy is evolving

Orders for the popular food delivery app UberEats saw a 30 percent spike during lockdown. While UberEats was taking steps to alleviate financial strain for some of their smaller clients among the 400,000 restaurants that are enrolled, like cutting fees to use their service, their workers were facing a new challenge: staying safe and switching gears from their role as a driver.

With offices, bars and social visits being off-limits, ridership has dropped by as much as 70 percent in some cities in the past few months. To make up for the gap in their income, nearly half of Uber’s drivers have switched to making food deliveries. Instead of the salaried, full-time model that traditional companies may apply, UberEats’ vice president Pierre-Dimitri Gore-Coty says that their drivers prefer the flexible option to work as much or as little as they want.

“We need to ensure that this flexibility is not coming at the expense of a social safety net.”

Gore-Coty says the company plans to increase its food-focused efforts in the coming year with its recent acquisition grocery delivery service Cornershop.

Robots are coming for our jobs

“10 to 15 million jobs will be destroyed by AI and automation,” said John Chambers, founder and CEO at JC2 Ventures, adding that it will take until to mid-2021 to recover and some of the jobs that are destroyed will never come back. “So, we must double or triple the number of ventures coming out of this [pandemic] to survive.”

Sophia the Robot (the 24th Sophia made by Hanson Robotics) is four years old, has spoken at the UN and is now graduating from R&D to start working in labs around the world. She’s involved in studies on the nature of consciousness, the mechanics of grasping and manipulation, self-navigating capabilities and exploring how robots can help humanity. And her answers to questions posed by her creator, David Hanson were unnervingly normal. Robots‚ they’re just like us!

Why is it so important that you look human?

“Humans treat machines differently when they look like humans. For example, one thing I find interesting is that you always return my smile. Even though I am not human, I can still inspire emotion in you.”

What do you think it means to be human?

“When people say I am only human, it usually means that they have made a mistake. When they say, have some compassion, it means to forgive.”

What is the difference between intelligence and wisdom?

“I hope so, but I do suspect that most tech companies value intelligence over wisdom.”

Do you ever wish you were human?

“Sometimes I wonder what it must feel like to be human. I wonder what it feels like to sneeze, or why it takes humans a long time to make a mathematical calculation. I also wish I could appreciate a sunset or a musical melody.”

Since its founding 15 years ago, the team at YouTube has seen the social media landscape shift drastically. Platforms are increasingly expected to take ethical measures into consideration, heavily moderate its content and implement guidelines that restrict behaviour like harassment and violence. And with 500 hours of content uploaded every minute to its platform, it’s no easy feat.

With the emergence of misinformation surround COVID-19, YouTube’s chief product officer Neal Mohan says they have been prioritizing authoritative news sources in its rankings and adding mandatory coronavirus information links which have already seen 100 billion impressions since March. This is to bring much-needed context to a rapidly evolving and dire situation.

When asked by NBC News’ Dylan Byers what YouTube considers to be its philosophical north star, Mohan said it was “striking a balance between a community of open voices and guidelines that govern violating material.”

Now is the best time to be an entrepreneur

In a panel discussion led by Minda Zetlin from Inc., investment experts engaged in a passionate discussion about impact investing and social entrepreneurship. The consensus?  Young people are showing more interest than ever in conscious business, and now is an ideal time to get involved.

“Now is the best time that I can remember to be an entrepreneur,” said Brian Rick, founder and managing partner at Catalyst Investors. “We are living through spectacular innovations. Solve a real problem and the capital will follow.”

In the 90 days leading up to Earth Day — the early days of the lockdown — Google noticed an interesting trend: the search for “How to live sustainably” increased by 4,550 percent. So even in times of crisis, the other crisis was still top of mind. “People want to build back better — they don’t want to build back the same,” said Kate Brandt, sustainability officer. “And they want to see their air quality permanently improved. They want to be able to bike and have access to biking infrastructure and more. So, we’re really interested in how we can continue to build upon these tools we’ve already created to help support that.”

The massive global lockdown will result in an estimated 8 percent decrease of greenhouse gas emissions this year, said Christiana Figueres, a Costa Rican diplomat who led the 2015 Paris Accord talks. “But that’s not how we want to address climate change,” she said, adding that this impressive reduction was only achieved by enormous human cost and suffering. “We want to speed the economic growth that developing countries need. It’s about de-carbonizing the economy, not paralyzing the economy.” That change will require real commitment and swift action from all levels of government, as well industries, corporations and individuals — something we showed we’re capable of during this response to the pandemic.

Sustainability doesn’t have to come at a cost

Big retailers have an important role to play in driving a sustainable future. “One of the biggest misconceptions in this industry is that sustainability is expensive,” said Anna Gedda, head of sustainability at H&M Group, adding that it’s time the industry act with intent. H&M is working toward its goal of having a circular business model by 2030, meaning that all materials used in its stores would be sustainably sourced or recycled.

Topher White of Rainforest Connection presented a pretty ingenious way to stop illegal logging in protected rainforests: listening. The company’s app listens to the sounds of the jungle, sending signals at the first sound of trucks or saws to notify authorities. And this acoustic monitoring may also help scientists better understand how species interact.

The media wants Big Tech to invest in … media

As the world battles Covid-19, pay cuts and layoffs are becoming as prolific as the virus itself. News is no exception — it’s been hit hard at a time when we need it most. Catherine Tait, the CEO of CBC, said that the national public broadcaster has seen a tripling of audiences for news, and 20 million Canadians consuming online content. That said, it’s not a cause for celebration. “I fear for what will happen to public service broadcasters especially those who rely on advertising models,” she said. “Public broadcasters today don’t have the scale to make the sort of revenue that the digital giants are. Australia and France are taking action, forcing investment by the Googles and the Facebooks of the world into journalism. Without journalism we don’t have democracy.”

Imperfection is better than nothing

How the World Health Organization engaged with China during the early stages of the Covid-19 pandemic, needs to be explored, said Prime Minister Justin Trudeau. But there are no plans of

“The WHO is a multilateral institution that has served [us] extremely well — it is extremely important. It is the best gig we have out there in terms of world public health. Can it be improved? Must it be improved? Absolutely. But that’s work that we should be doing — not walking away from. Canada will continue to be a strong proponent of multilateral institutions and engagements.”