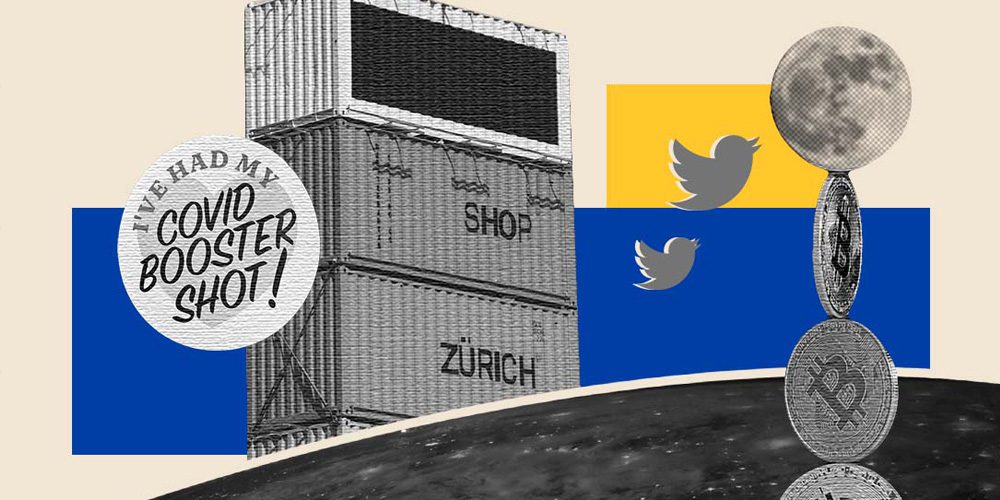 From crypto hitting the stratosphere to the new space race, here are the year’s standout developments in innovation.

We’ve gained an uncomfortable familiarity with the Greek alphabet from COVID-19’s latest variants, our grocery bills have grown due to supply chain woes and severe weather events are bringing the climate crisis ever closer to home. But 2021 was also a year of positive changes, with the widespread vaccine rollout, many people reconfiguring their careers and the stock market soaring.

When it came to innovation, there was a lot of it. Here are some of the biggest tech trends of the year.

Giving the pandemic our best shot

Despite a slow and often chaotic vaccine rollout, more than 76 percent of Canada’s population is now inoculated and the booster program is gathering pace. Significant developments are underway to ensure Canada is more self-sufficient when it comes to navigating the next wave. In August, the federal government announced plans to build a state-of-the-art mRNA vaccine production facility in Canada, and biopharmaceutical manufacturers are getting closer to giving the country its first homegrown COVID-19 vaccine.

“Canada’s outlook on pharmaceuticals has changed markedly since the pandemic hit,” says Takashi Nagao, president and CEO of biotech firm Medicago. “We don’t know when the next pandemic can happen, and we can’t have one platform or company doing everything.”

Medicago’s plant-based vaccine, which showed promising results against the Delta variant in its Phase 3 trials, is pending approval from Health Canada. “We are excited to potentially contribute to diversifying the pool of available vaccines,” Nagao says.

Meanwhile, researchers at McMaster University are making progress on an adenovirus COVID vaccine delivered by inhaled aerosol that targets the lungs directly. Human clinical trials are set to begin early next year, though this method of vaccine delivery still requires further research.

“Realistically, widespread availability is still at least a couple of years into the future,” says lead researcher Fiona Smaill, a professor of infectious diseases and medical microbiology at McMaster.

As for treatments, Vancouver-based AbCellera Biologics is looking to build on the success of its antibody therapy, bamlanivimab, which was approved for emergency use in Canada and the U.S. last year and has saved thousands of lives. This month, the U.S. Food and Drug Administration expanded its emergency use authorization for bamlanivimab administered with etesevimab, another monoclonal antibody, to treat COVID in patients under 12.

From Facebook rebranding as Meta to the CEOs of Twitter and Amazon stepping down, big tech is undergoing some massive changes.

“It signals that big tech would rather move on to the next supposed big thing than do the hard work of fixing the products they have already built,” says Taylor Owen, founding director of McGill University’s Centre for Media, Technology and Democracy.

Calls for greater regulation are mounting. In the fall, Frances Haugen, a former Facebook product manager, accused the company of knowingly stoking discord after leaking tens of thousands of internal documents about the social media giant.

Big tech needs to be reined in, Owen says, and argues that Canada should beef up its digital governance, create far greater transparency and accountability, and re-invigorate competition in its online markets. “In 2022, we have the chance to learn from what other countries have done and implement a serious governance agenda,” he says.

Money is flowing into Canadian companies

Silicon Valley Bank expects Canada to end 2021 with a new record for venture-capital deals. By the end of September, there were already 568 deals amounting to $11.8 billion, according to the Canadian Venture Capital and Private Equity Association. That is more than all of 2019, the previous highest year, when $6.2 billion was invested in 560 deals.

Experts attribute this momentum to more late-stage funding rounds, as mature Canadian ventures tend to attract larger sums from foreign venture capitalists. Some of the big deals this year include ApplyBoard’s $375 million Series D raise in June and Vancouver’s Dapper Labs’ $250 million U.S. in Series D funding in September, which came on the heels of $305 million U.S. in Series C funding it landed earlier in the year.

“We are creating better companies, ones that grow faster and can attract later-stage funding instead of having to be sold,” says Charles Plant, founder of The Narwhal Project, an organization that helps emerging tech companies.

We can expect to see more megadeals in the coming year, Plant says. “I think software will continue to outpace health and cleantech, as there is a very large number of companies ready to break through,” he says.

Whether it was semiconductors, meat or Christmas trees, the fragility of global supply chains was on display this year, and companies of all sizes had to rethink how they obtain supplies.

“The global impact of COVID-19 has raised the importance and urgency of having transparency and access to supplier information,” says Stephany Lapierre, founder and CEO of TealBook, a supply-chain management company in Toronto. “Corporate priorities are growing and teams have to continuously meet the demands while adapting to market changes.”

Some experts predict the supply chain crunch will ease in the second half of 2022, but companies still need to plan for ongoing challenges — which means they need good data. “Having access to the right information allows for greater diversity and flexibility within networks, protects against costly disruptions, and enables organizations to be agile in the face of new needs,” says Lapierre.

To the moon! More and more interest in crypto space

Bitcoin rallied to nearly $69,000, an all-time high, in November. Venture-capital funds poured almost $30 billion U.S. into the crypto industry this year, more than all previous years combined. But the buzziest segment of the crypto space belongs to non-fungible tokens (NFTs): Shopify announced a program that will allow creators to sell these digital collectibles, Nike purchased a virtual shoe company and even Melania Trump is launching a new NFT venture.

“You can expect more and more crypto offerings,” says Cédric Jeannot, co-founder of Be One Financial, an app that accepts deposits of cash and cryptocurrencies, and allows consumers to convert one into the other. Plus, expect to see further growth in NFTs. “There are many use cases for NFTs, like renting a piece of art to a digital museum or the creation of a sort of Spotify 2.0 where the artist automatically gets paid without human interaction every time their song is played,” Jeannot says.

It has been a historic year for humans in space: there have been 13 crewed spaceflights (eight orbital, five suborbital), with three private companies (SpaceX, Blue Origin and Virgin Galactic) completing ground-breaking commercial missions.

“Until just last year, the big question in the changing of the old space guard was: Could the incumbents keep up with the pace of innovation? I think the answer is now a definitive ‘no’,” says Chad Anderson, managing partner of Space Capital, an early-stage venture capital firm focused on space technologies.

One of Space Capital’s portfolio companies, Planet Labs, an earth-imaging satellite business, started trading on the Nasdaq on Dec. 8. Anderson sees this trend continuing next year. “We expect to see more space companies go public in 2022,” he says.
His other predictions for the future include: SpaceX’s massive Starship — a reusable spacecraft — reaching full orbit, the first commercial mission to the moon, private space stations, and several breakthroughs in satellites.

Adena Ali writes about technology for MaRS. Torstar, the parent company of the Toronto Star, has partnered with MaRS to highlight innovation in Canadian companies.