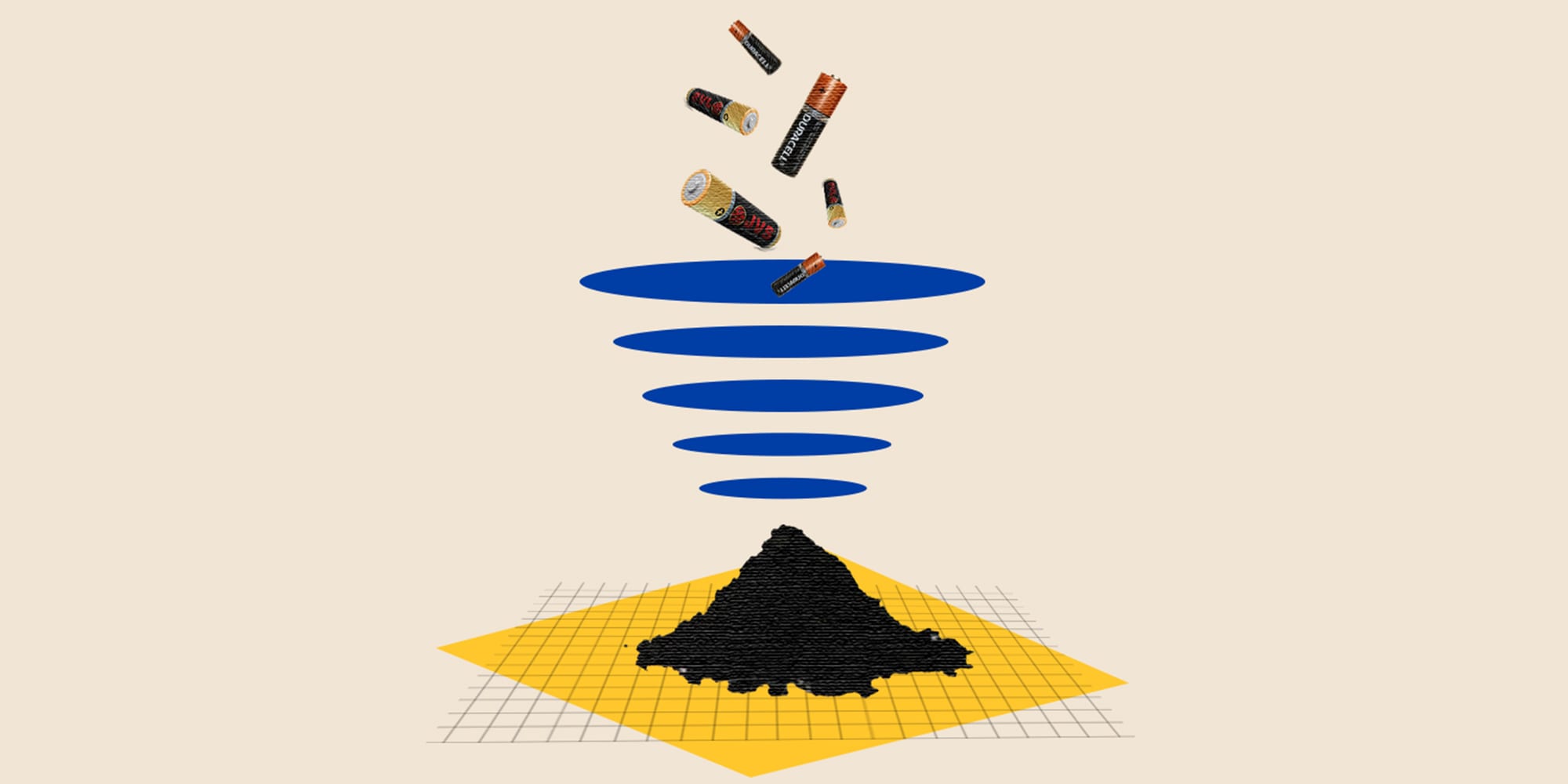 Lithium is a key element that powers our smartphones and electric vehicles. But to meet the growing demand, we need better ways of managing this resource — from mining to recycling.

It’s tempting to think that each of these activities has a negligible effect on the environment.

But they all depend, not only on electricity, but also on the lithium-ion battery, a device that may become the most important technology of the 2020s.

The lithium-ion battery depends, in turn, on lithium, an element synthesized during the Big Bang that resides, albeit in minuscule propositions, in rock, clay, and seawater all over the planet.

Electric vehicles and renewable-energy sources are supposed to help us avert climate catastrophe, but if these industries depend on an environmentally destructive resource, are they really helping at all?

The answer to this question hinges on another: How do we ramp up our sustainable lithium production and make better use of the lithium we already have?

The Lithium Triangle, a region in the Andes where Chile, Argentina, and Bolivia converge, has roughly half of the world’s available lithium deposits. From the air, your typical Latin American lithium operation resembles an old type tray or a Mondrian painting: square ponds laid side-by-side with stunning geometric precision. They’re beautiful, like land art, but they’re also incredibly destructive.

First, saltwater, with a lithium concentrate of 1,500 parts per million, is pumped out of rocky aquifers deep underground. This briny compound then goes into an “evaporation pond,” an artificial pool the size of several football fields, where it sits for 18 months beneath the scorching desert sun. The liquid slowly evaporates, and the minerals in the compound — they are magnesium, potassium and sodium — sink to the bottom. Left over is a layer of lithium-rich water, with a six-per-cent concentration, which can be transported to nearby refineries that bring it to 97-per-cent purity. (It is then shipped to facilities in Korea, Japan, or China, which produce a battery-grade product.)

The pond process relies on solar energy, a cheap and sustainable resource.

But it leaves behind a salty residue, which is terrible for local ecologies.

In the Lithium Triangle, salt gets into streams and sinks beneath the soil, affecting the water supply of nearby Indigenous communities. “An oil spill is bad,” says Amanda Hall, founder and CEO of the Calgary-based startup Summit Nanotech. “But, in time, the affected area grows back twice as lush as before, because oil is a fertilizer.

“But when salt contaminates a landscape, everything dies.”

During a 2019 visit to the Lithium Triangle, Hall asked a Chilean mining operator if he might consider a more sustainable approach, but he shut her down. “There’s nothing you can say,” he told her, “to convince me to get rid of my evaporation ponds.” His company had invested time and money into a workable production process. He wasn’t going to overhaul it simply because a visitor from Canada thought that he should.

And yet, an overhaul is in order, and not just in the Lithium Triangle. The mines of Australia and China perturb the surface of the earth, leave piles of toxic tailings, and require vast industrial infrastructure, including roads traversed by fleets of trucks piled high with rock.

And yet the industry is only going to grow, first when electric vehicles go mainstream and then when solar and wind power become more widespread, creating a need for massive batteries that can store renewable electricity, making it available on cloudy or windless days.

“Demand for lithium may well increase by 200 or 300 per cent by the mid-2030s,” says Daniel Alessi, a professor at the Department of Earth and Atmospheric Sciences at the University of Alberta.

To match demand, Alessi argues, Canada should invest in domestic lithium production, thereby avoiding complete dependence on foreign suppliers with questionable labour or environmental standards. (The labour standards in Chile and Argentina are relatively good; the standards in China and Bolivia are less so.) Canadian lithium producers should start looking in unexpected places.

For starters, they have access to one significant lithium source: batteries. A discarded phone, laptop or electric vehicle may seem as though it is a piece of junk, but it’s also a kind of lithium-rich ore.

Kunal Phalpher, chief commercial officer (CCO) of the Toronto-based startup Li-Cycle, is building the infrastructure necessary to exploit this resource. Geographically, the company has a hub-and-spoke model. The spokes comprise three nodes, one in southern Ontario, one in the Tristate Region and one under construction in the American Southwest, all locations with rising electric-vehicle use.

Recycling companies can deliver junked lithium-ion batteries to any one of these depots.

The batteries will be shredded on-site, and a machine will extract the so-called black mass, a gunpowder-like material comprising cobalt, nickel and lithium.

This compound will then go to Li-Cycle’s central hub, a plant under construction on a former Kodak facility in Rochester, New York. There, the powder will be subjected to a series of proprietary chemical processes that separate it into its constituent parts, which can be sold to battery producers.

“The sheer volume of batteries available for recycling is going to increase drastically,” says Phalpher. “At the same time, everybody in the electric-vehicle industry is saying that, currently, there’s not enough production of battery materials to meet future demand. So, not only do we have an end-of-life problem, we have a beginning-of-life problem, too.”

Batteries, in short, will need to be disposed of, but they will also need to be manufactured.

“Our aim,” Phalpher adds, “is to solve these two problems through a circular economy.”

Currently, the company has the capacity to recycle 10,000 tonnes of batteries, enough to power 20,000 electric vehicles, and it has contracts with more than 50 recycled-battery suppliers.

Phalpher sees his business as analogous to mining, albeit without the typical infrastructure. “We’re urban mining,” he says. “We’re hunting for batteries to use in our production process.”

A second potential source of domestically produced lithium is the oil and gas wells in Western Canada.

Right now, most Canadian wells pull out far more saltwater than hydrocarbons. Some have a so-called “saltwater cut” of 90 per cent. This by-product then gets shipped to an abandoned well and injected back underground. It isn’t nearly as lithium rich as the brines being pumped out of the Andes. But why not use it?

Two years ago, Alessi co-founded a start-up, Recion Technologies, seeking to extract lithium from the wastewater of Canadian wells economically.

The goal is to build modular, refineries on site, in which brines can be purified chemically in tandem with the extracting of the oil. The wastewater will enter a reactor, where a chemical binds to the lithium. Then the remaining water will be filtered out. The details of the process are still being developed, but Alessi hopes to have a pilot project completed within two to five years.

Like battery recycling, the process will make use of materials we have now. “You’re not drilling for brine,” says Alessi. “You’re just borrowing it from oil producers. The operation doesn’t have much of a footprint. The roads are already there. The pumpjacks are already pumping. And you don’t need to dig out 1,000 acres to create an evaporation pond.”

The Bullet Train for lithium

But what about Latin America, which in any foreseeable future will still produce much of the world’s lithium? What will convince mining operators to give up the ponds they’ve invested in, or, at least refrain from digging more as they scale up their business?

For Hall, the answer is this: Find a way to save them money.

Summit Nanotech is building a pilot version of a modular refinery, roughly the size of a railway car. Lithium brine can be pumped into it and then treated, at least initially, through nonchemical processes.

“I’m a physicist, not a chemist,” says Hall, “so I approached the problem from a physics perspective.”

First the brine runs through a column, which is filled with a spongy material that absorbs the lithium and lets the rest of the water run through. (The holes in the sponge are exactly the size of lithium ions.) The sponge is then washed with water, and the run-off passes through a second column, this one with a filter that traps non-lithium particles. Then, the remaining solution is further refined through late-stage chemical reactions.

Because Summit Nanotech uses a physics-first approach, the method generates 90 per cent less waste compared to traditional chemical refining. And it produces a 99-per-cent lithium concentrate within a mere 12 hours.

“We call it the Bullet Train for lithium,” says Hall.

“Producers can take wells that are already drilled, divert the brine to us, and get twice the lithium they’d otherwise get,” says Hall.

She’ll test the pilot facility in Chile at the end of this year, by which time she hopes to have proof-of-concept for a cleaner, more efficient way of extracting lithium.

And the evaporation ponds?

“It would be nice,” she says, “if they were turned into solar farms.