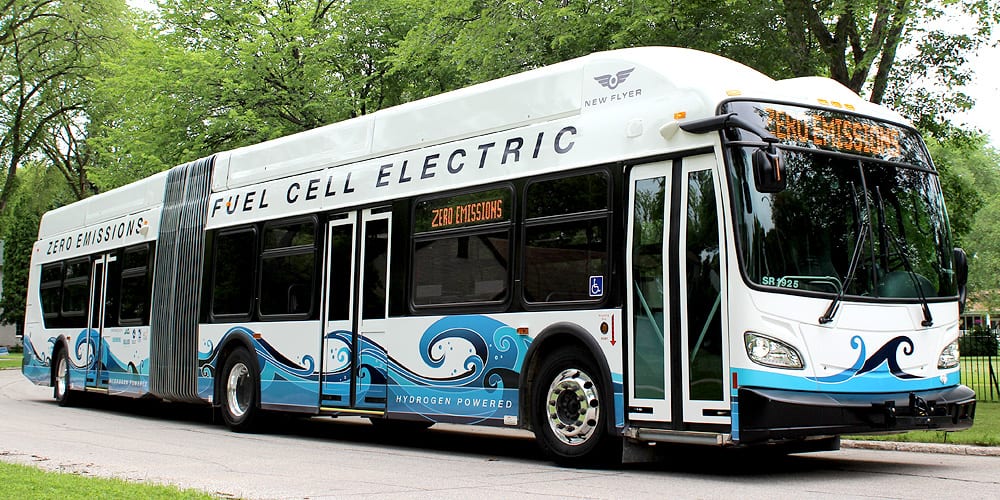 Canadian technology powers roughly half the 2,000 fuel-cell electric buses on the road around the world. New pilot projects aim to bring that technology home.

Canada’s hydrogen industry is looking to municipalities across the country to spur demand for homegrown technology by putting zero-emission, fuel-cell buses on city streets.

The potential for hydrogen to power cars, trucks, buses and trains has been talked about for decades without much progress. British Columbia made an early push to become a leader in the hydrogen industry and that initiative culminated in a pilot project that ran fuel-cell buses for the 2010 Winter Olympics. However, fuel-cell technology was still in development and could not come close to competing with gasoline- or diesel-powered vehicles. Plus, there’d been little thought given to the massive investment needed to supply hydrogen at commercial scale. In 2014, BC Transit sold off its fleet of 20 hydrogen buses that were powered with fuel cells from Vancouver-based Ballard Power.

Now proponents say hydrogen technology is ready for its day in the sun. Fuel-cell performance and costs have improved dramatically, and municipalities and corporations have made commitments to reduce greenhouse gas emissions that require them to green their fleets of buses and trucks. The federal government is looking to hydrogen as part of its climate plan. Ottawa’s recently released hydrogen strategy forecasts that it could become a $25-billion industry by 2030 in Canada, growing to $50 billion by 2050.

Big hurdles remain, however. In order to produce, deliver, use and store the gaseous fuel, the industry requires government support and significant public and private spending. And production needs to ramp up. Hydrogen has to be manufactured from other energy sources: either by reformulating natural gas or through an electrolysis process that uses electricity to split water into hydrogen and oxygen. The resulting hydrogen can essentially be a low-carbon fuel if the carbon-dioxide emissions are captured and sequestered in the natural-gas process, or if the electricity used comes from non-emitting power generation.

The challenge facing the hydrogen industry is essentially a chicken-and-egg dilemma. To justify investments that will reduce the cost of producing hydrogen, companies need customers. But to make the investments required to expand the use of hydrogen-fuelled transportation, would-be customers need a reliable and affordable supply. Which is why the purchase of hydrogen fuel-cell, electric buses by transit authorities represents such an important source of demand for the fledgling industry.

Transit operators in Mississauga and Winnipeg are making plans that would see each purchase 10 hydrogen electric buses for pilot projects to test the vehicles’ performance and operating costs. Both cities are looking to the federal government to help defray the costs of the vehicles. The hydrogen fuel-cell buses have greater range and need less time to charge so would complement the all-electric buses the transit authorities are planning to purchase.

The City of Edmonton is the biggest municipality in the country’s first Region Hydrogen HUB, which aims to expand the production, export and use of hydrogen in rail, trucks and city buses. Edmonton has already ordered 40 all-electric buses and is expected to test hydrogen models as the regional hub addresses issues, including the supply and distribution of the fuel.

These municipalities are working with such innovative hydrogen companies as Ballard Power Systems, Mississauga’s Hydrogenics, which is now a subsidiary of U.S.-based Cummins Inc., and Winnipeg-based New Flyer, which manufactures electric and hydrogen-electric buses. The three companies all have customers in Europe, China and the U.S. for hydrogen-powered buses, trains and trams. All told, Canadian technology powers roughly half the 2,000 fuel-cell electric buses on the road around the world. These municipal projects would get them into Canada’s urban transportation market.

Canada has some strong advantages in the competitive global market. While most hydrogen currently being produced for industrial purposes uses natural gas and is the source of greenhouse gas emissions, several Canadian companies are pursuing cleaner methods to produce relatively low-cost, zero-emission hydrogen from our clean electricity system.

“Canada is completely leading in the cleantech aspect of hydrogen,” says Wido Westbroek, Cummins’ general manager for its global fuel-cell business. The company manufactures electrolyzers in Mississauga, which produce “green” hydrogen from water and clean electricity.

In adopting hydrogen-powered transportation, Canada is starting to make up ground it has ceded to European transportation authorities, Westbroek says. “There is a recognition that, as time goes by, when it comes to really zeroing in on the areas where zero-emission vehicles make the most sense, governments are starting to put their shoulders into it.”

To spur the investment necessary to build a hydrogen supply chain in Canada, Ottawa says it will finance the acquisition of fuel-cell electric buses by school boards and municipalities.

While hydrogen-powered vehicles are considerably more expensive than existing diesel models or even electric battery ones, that disadvantage is offset given the reductions in greenhouse gas emissions and other air pollutants as well as lower operating costs, says JosipaPetrunic, president of the Canadian Urban Transit Research and Innovation Consortium, which is advising on the Mississauga pilot project.

There are already several commercially successful leaders in hydrogen fuel-cell technology that are well-positioned to take advantage of a burgeoning hydrogen market, notably Cummins/Hydrogenics, Ballard and Loop Energy, a Vancouver-based startup that listed on the Toronto Stock Exchange in February. And several Canadian startups are providing innovative technology all along the hydrogen value chain: from production to distribution to use, including Svante and Planetary Hydrogen, which offer technology to capture carbon from the production of hydrogen, and Hydra Energy, which retrofits heavy duty vehicles to run partly on hydrogen.

Mississauga’s Hydrogenics grew out of work done at the University of Toronto. Since the startup was acquired in September 2019 by Cummins, a Columbus, Indiana-based manufacturer of engines for trains, buses and heavy-duty trucks, its Mississauga operations have expanded from two buildings to three and remain a hub for research and manufacturing.

The Hydrogenics fuel cell is a key component in the hydrogen-electric powertrain that Cummins has sold to Alstom, a French train manufacturer. Alstom has placed an order for 82 fuel-cell electric powertrains for its hydrogen-powered Coradia iLint trains that have begun delivery in Germany.

As well, Cummins is partnering with Enbridge Gas on an electrolyzer facility in Markham that would supply the Mississauga transit pilot project with hydrogen produced from surplus renewable electricity. Enbridge also intends to mix hydrogen with its natural gas to reduce the carbon content of that fuel.

Mississauga Transit — MiWay as its known — is planning to purchase its buses from Winnipeg’s New Flyer, which will use fuel cells provided by Ballard Power Systems. When it comes to commercializing innovative fuel-cell technology, Ballard remains Canada’s marquee name. Over the last few years, Ballard has built a solid business supplying hydrogen fuel cells for forklifts and other heavy-duty vehicles. As well, it has a subsidiary in China that supplies its engines to bus fleets and trams. Recently, it signed a deal to supply fuel cells to Canadian Pacific Railway, which plans to run a pilot project with the world’s first hydrogen-powered freight trains.

“Since the days of the 2010 Olympics, there has been tremendous progress made improving the performance of Ballard’s fuel cell products and in cost reduction,” company spokesman Guy McAree says. The fuel cell itself packs greater power in a smaller space, while the purchase price of hydrogen buses has been cut in half.

A decade ago, there was hydrogen hype that failed to deliver. This time, the determination of governments and the private sector to reduce greenhouse gas emissions in the transportation sector is providing powerful impetus to clear the hurdles.