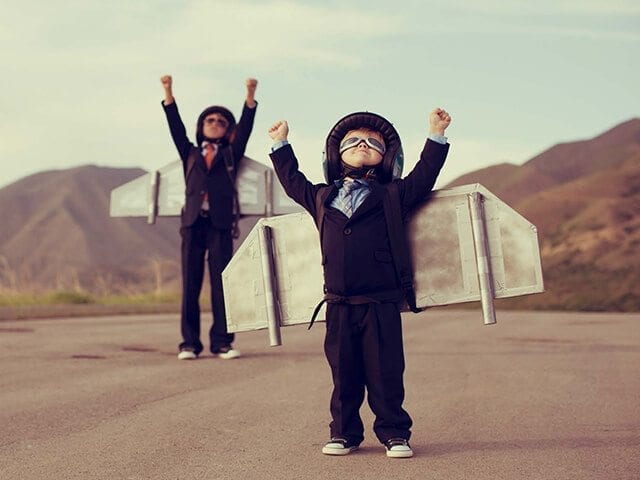 At the standing-room-only kickoff of the MaRS Mornings breakfast series last week, Mike Serbinis, serial entrepreneur and founder of Kobo, gave a rousing talk about his incredible entrepreneurial journey, highlighting for the audience the biggest “aha!” moments he’s had throughout his career. As he moved from one great idea to the next, a common thread emerged: entrepreneurs need to “think bigger” than their initial inspiration.

And Mike Serbinis should know. In addition to Kobo, he founded and sold cloud storage pioneer DocSpace, developed network routing technology at Microsoft, and created search engine technology that later sold to Altavista.

Since his life’s work includes some of the most highly successful—and highly technical—ventures, it was surprising to learn about the low-tech beginnings of some of these disruptive companies. Yes, I’m talking napkin drawings. In fact, the rough napkin outline that eventually led to Kobo now hangs framed in the MaRS-based office for his latest venture, LEAGUE (which, incidentally, was also first plotted out on a napkin). [Note to self: stock up on napkins.]

Launched at MaRS Mornings, LEAGUE is a new digital health and wellness platform that is aimed at giving consumers more control over their health. According to Serbinis, our current healthcare system, which represents a $4-trillion market in the US and Canada, is simply not sustainable and needs to change. We spend far too much on treating illness and not nearly enough (1% of total spend) on keeping people healthy, which presents “a massive opportunity—possibly the biggest opportunity of the next decade.” The LEAGUE platform will launch in early 2015.

To learn more about Serbinis’s thoughts on success and advice for entrepreneurs, read the Q&A below. If you missed his talk, see his slide presentation here.

Join us for the next MaRS Mornings

If you’re interested in hearing from disruptive entrepreneurs in person, join us at the next MaRS Mornings event on December 10, featuring three successful founders who have all created startups in women’s health. The event is free of charge and open to anyone.

MaRS: Throughout your career, you’ve been involved in some of the most successful ventures in the tech world:

Is there a common thread in the success of each of these ventures?

Michael: Absolutely. I have definitely been attracted to industries that are ready for change. Where digital technology can make things better and where consumers are ready for it.  Envisioning the future and turning that into reality. In all of my companies, we took on existing industries, envisioned the future and created a new way forward. And that’s the easy part.

The tough part is execution, and assembling the team to execute. That’s where culture is key. I believe culture eats strategy for lunch any day of the week.  It isn’t something that happens as the result of those you hire, it’s something that you consciously think about, you design and then build a team around. An unwavering commitment to that culture will define how successful you are.

“I believe culture eats strategy for lunch any day of the week.”

Beyond that, a consistent thread in each company is the ability to think bigger. For example, creating a global platform for eReading vs. creating the best ebook player in Canada. I encourage my teams to think bigger, to expand their initial ideas, push beyond their capabilities, and punch above their weight.

MaRS: You mentioned that being CTO at Critical Path required a lot of grit and determination – that it was “character building.” Did you ever think of giving up? If not, what kept you going?

Michael: After we sold DocSpace to Critical Path, the market turned. While our stock did climb for a bit longer, eventually we were impacted like everyone else. It would have been easy to leave at that point.

Instead, I dug in. It was important to me and the team that we turn around a horrible situation and stay committed to our vision. There were thousands of employees, partners and customers working with us – over a hundred million end customers were using our services.  Regardless of what was happening in the market, we knew that we were doing something important, and we had to make it through a very tough time.  No matter how hard things got, I remained pretty optimistic – that’s an important trait in an entrepreneur.

I travelled over a hundred days a year for four years to help rebuild the company after the bubble burst and by the time I left Critical Path, we were managing one-third of the world’s email, and we were profitable. The entire company dug in, and we salvaged a very bad situation. It speaks to culture and knowing why you’re doing what you’re doing.

MaRS: You’ve had a few pivotal epiphanies in your career. What advice do you have for entrepreneurs about inspiration?

Michael: I recently got asked if there is a process for manufacturing moments of inspiration. I was a bit stunned. Moments of inspiration are not in-and-of-themselves unique. We have them all the time. They sound like this, “what if…” or “wouldn’t it be great if….” Or “this would be so much better with….”

The challenge is to take a moment of inspiration or napkin-drawing and make it real. Deciding to go all-in. That’s where it gets hard, and not everyone can succeed. Building a business, not just a technology or a product, is not for the faint of heart.  Building a viable business, and competing to win – well, that’s even tougher.

If I had a dollar for every time someone told me that a new company wouldn’t make it, that there were too many competitors, that our business model wouldn’t attract investors, customers, partners, etc. Well, I’d have retired to a beach somewhere long ago, I suppose. It’s the drive to move forward, to build, to make a change against the odds – that’s what defines entrepreneurs. And if you have that drive, you’ll get up every day excited to turn that inspiration into something tangible.

MaRS: Why LEAGUE? Why now?

Michael: It’s time. The healthcare system is unsustainable. It’s currently estimated at $4-trillion USD and is set to double as a percentage of the GDP. I don’t know about you, but I find that alarming. It leaves us with one of two choices – do nothing and be forced to cut services, or continue to feed the beast. Or fix it. When you consider that half of healthcare costs are preventable but we only spend 1% on prevention, this represents a massive opportunity. It could, in fact, be the biggest opportunity of my life.

Expecting government, large enterprises to fix this makes no sense. It’s our responsibility – you, me. Consumers need to take control, and be responsible for their health and in order to do that, we need better tools. We need a way to work with healthcare professionals – to find them, discover services, and easily book and pay for them. We need a way to get ongoing care and information that is relevant to us and our goals. An ounce of prevention they say, is worth a pound of cure.  My bet is that over the next decade, prevention is going to be a hot space.

Technology can help accelerate that growth by improving the experience. That’s what we are doing at LEAGUE. For me personally, it’s a massive, Everest-size opportunity and that gets me up every morning, and keeps me up all night.

“As I learned with Kobo, Toronto is also a great place to build a platform that can be exported globally.”

MaRS: You’ve lived and travelled all over the world and yet chose to launch LEAGUE from your base here at MaRS in Toronto. Why?

Michael: I’ve lived and worked in the Valley, travelled millions of miles doing business across Europe, Asia, South America and Africa. I’ve learned an awful lot about what works where, and I’ve met some amazing, talented people along the way. So when I look at Toronto, I look at it through a critical lens.

We have amazing grey matter in Toronto. As I learned with Kobo, Toronto is also a great place to build a platform that can be exported globally. As it pertains to health – if I was going to build an ideal environment to launch digital health companies I would want these things:  a) great infrastructure; b) access to really smart people and world-class research / educational institutions; c) access to dozens of hospitals within walking distance; and d) access to decision-makers in both the government and private sectors. MaRS actually has all of this, and then some. It was a natural choice to start LEAGUE there.