Thinking beyond the light bulb with Nanoleaf 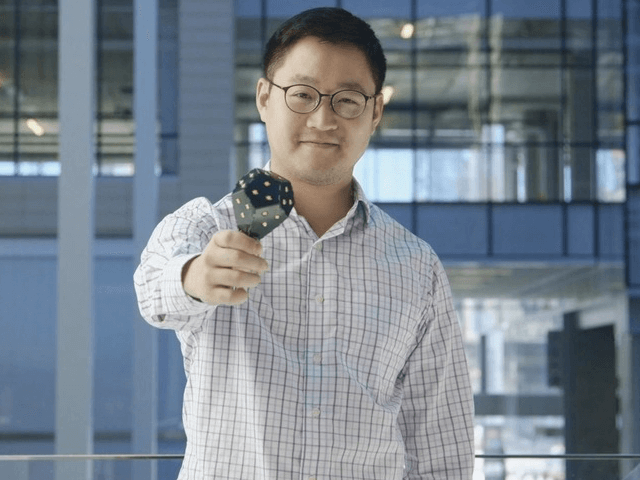 Gimmy Chu thinks that buying sustainable products should not be like taking cod liver oil. He and his partners at Nanoleaf want consumers to buy their energy-efficient LED lighting products because they’re fun and stylish, and because they provide good value.

He’s found plenty of people who agree, from the thousands of backers who put up small stakes on Kickstarter to one of the world’s richest men, Li Ka-shing.

With assistance from MaRS, Gimmy has set up a Toronto office in a third-floor walk-up space on John Street where Nanoleaf will design and sell an expanding range of new lighting products both in Canada and worldwide.

Nanoleaf works with LED or light-emitting diode technology. There’s nothing revolutionary in that. LEDs generate light by sandwiching a semi-conductor between two surfaces: one bearing a positive charge and the other bearing a negative charge. Light is emitted when electrons pass from the negative surface to the positive surface; the semi-conductor controls the flow.

Nanoleaf has added some twists to the standard technology. The company uses lasers to etch grooves into the flat surfaces of LED plates so they can be folded into three-dimensional shapes. What comes out looks pretty much like a conventional light bulb—albeit one constructed with a series of flat planes instead of a continuous round form. The bulb even screws into a conventional socket.

The device, the Nanoleaf Smart Ivy, may mimic the conventional light-bulb shape, but there’s nothing conventional about its use of energy. That’s because Nanoleaf has developed super-efficient LEDs—the most efficient in the world, Gimmy claims.

How efficient are they? Efficiency is generally measured by the amount of light generated—measured in units called lumens—for each watt of electricity used. A conventional incandescent bulb produces about 20 lumens per watt, explains Gimmy. Compact fluorescent bulbs can manage up to 50 lumens per watt. Typical LEDs get 70 to 80 lumens per watt, he says.

Nanoleaf, by contrast, produces 150 lumens per watt, says Gimmy. Moreover, the LEDs are very long lasting: a unit can last for up to 30 years.

They’re also consumer-friendly. Nanoleaf’s units are dimmable and they are able to connect with Apple HomeKit technology, so they can be controlled remotely with an iOS device or by Siri voice command.

The company is now thinking beyond the bulb. Nanoleaf’s newest product, the Aurora, is a lighting device that hangs flat against the wall. The glowing units look something like triangular floor tiles, with sides about nine inches long. They can hang singly or in any pattern a decorator’s imagination comes up with.

Controlled by manipulating a central unit called the Hub, the Aurora can also change colours. The Hub, which can also control the Smart Ivy bulbs, is in the form of a dodecahedron, a 12-sided solid block with each side a perfect pentagon. It’s a form that fascinated Plato and it has become Nanoleaf’s signature shape. The Hub sits on a table or in the palm or your hand and you can change the colours of the light by rotating it.

Gimmy and his co-founders Tom Rodinger and Christian Yan have come a long way since they met while working on the University of Toronto’s solar vehicle project more than a decade ago. They went in separate directions after graduating, but they kept in touch and often tossed around ideas to keep working together.

At first their talk centred on solar technology, but by 2012 they had zeroed in on lighting and started serious development of what became the Smart Ivy. They were ready to go to market by 2013 and suddenly realized that they needed financing.

Their first instinct was to crowdfund. They got on Kickstarter and, to their delight, raised $273,278 from 5,746 backers. It was enough to get manufacturing going in Shenzhen and Hong Kong, and to start shipping products by mail.

But to grow, they realized they needed more substantial backing. Gimmy credits Ian Burchett, consul general of Canada in Hong Kong and Macao, and Meric Gertler, president of the University of Toronto, with providing contacts that set Nanoleaf up with several venture capital funds, one of which is backed by Chinese billionaire Li Ka-shing.

“That was huge,” says Gimmy. “At that time, we didn’t know anything about venture capital. We were just a bunch of engineers. That introduction changed our lives.”

When Gimmy began to build up Nanoleaf’s Canadian presence, MaRS initially offered the company office space (which it quickly outgrew) and provided contacts with retailers. MaRS also showed the Nanoleaf team how to access funding.

Nanoleaf now has about 35 employees, with 15 in Canada and the others in Hong Kong and Shenzhen. The team is aiming to get the Aurora on the market in September.

After that, there are more ideas in the pipeline. “We have some really cool stuff we’re working on,” Gimmy says.