This company gives machines minds of their own 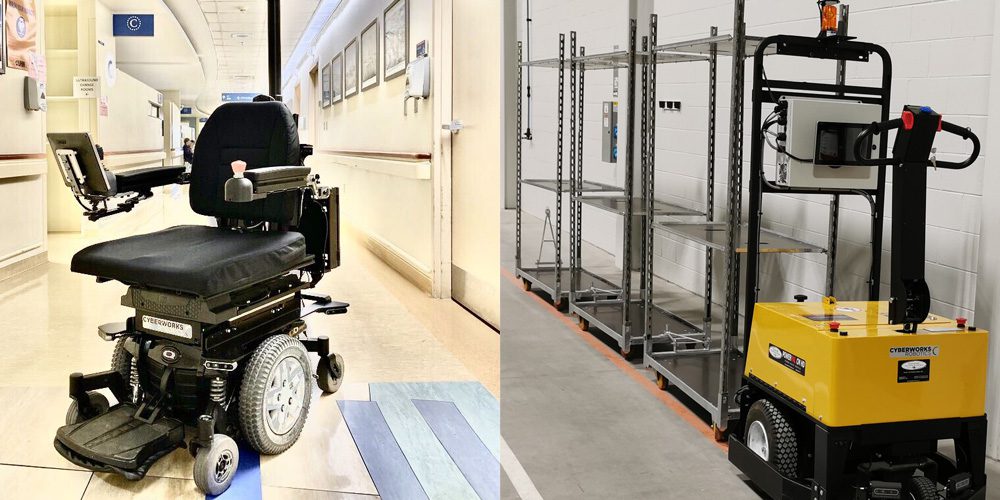 Cyberworks retrofits devices like wheelchairs and tow tugs to turn them into smart self-driving vehicles.

Even as a child, Vivek Burhanpurkar wanted to do “the hardest thing possible.” With a love for technology inspired in part by R2-D2 in Star Wars, Burhanpurkar was determined to make at least one aspect of science fiction a reality: a world filled with smart robots.

As an electrical engineering student at the University of Toronto in the 1980s, Burhanpurkar laid the groundwork by writing the world’s first academic thesis on self-driving technology for indoor, unmapped areas. Now 58, Burhanpurkar is CEO of Cyberworks, a Markham-based robotics company. But the cultural reference point he has landed closest to is less Star Wars than Fantasia — bringing inanimate objects to life.

Cyberworks has developed a technology called the Retrofit Autonomous Vehicle System that turns rudimentary devices — wheelchairs, industrial floor cleaners and warehouse tow tugs — into smart self-driving vehicles. The result is machines that appear to have minds of their own (and places to go — as they glide through offices and storerooms they can look as though they’re making a break for it).

Cyberworks retrofits regular machines in two ways. In one scenario, the company licenses its technology to equipment manufacturers who install the necessary sensors, cameras and touch screens on their products during the assembly process. The finished machine looks just slightly different from a regular one — for instance, there might be a pole rising from the back of a machine holding a laser scanner that constantly maps the environment.

Cyberworks can also retrofit existing fleets of conventional equipment. This method is, however, more difficult, because, as Burhanpurkar says, “we have to take them apart, put on all the sensors and computers and install all the wiring.”

Each device is outfitted with several depth-sensing cameras, says Burhanpurkar. “This tells us where everything is around the self-driving vehicle so that it can figure out how to get from A to B or how to go around an obstacle that might be in its path.” If a person were to jump in front of the vehicle, it would respond by stopping and/or pivoting in a fraction of a second.

The price of depth-sensing cameras has dropped precipitously in recent years, from around $20,000 to a few hundred dollars each. “That was a huge factor in terms of getting self-driving technology to be commercially viable, it needs to be available at a cost that people can afford,” he says.

Cyberworks is one of the top companies in the world producing robotic wheelchairs — a market that’s set to explode, thanks to the growing percentage of the population with mobility issues. According to a recent analysis, the global robotic wheelchair market was worth more than US$114 million in 2021 and is expected to triple by 2032.

When Patrik Rogalla, a radiology professor at Toronto General Hospital, heard about Cyberworks’ wheelchairs, he thought it might be an answer to the persistent problem of moving patients around in complex hospital layouts.

“When I was in the United States, I once told my supervisors that it was possible to fly the Concorde to Germany and get a patient’s scan done more quickly than bringing the patient down one floor,” says Rogalla. “It’s no different here in Canada — or anywhere.”

In 2019, Rogalla and Burhanpurkar began collaborating to test the wheelchair at TGH. As a result, several modifications have been made, including the addition of a seatbelt and a touchscreen on the back so that an operator can shadow it during testing and access the computer controls. For Rogalla, the experiment is proving to be valuable. “The beauty of this solution is that it doesn’t require a lot of internal investments,” he says. “It’s pretty much accepting the infrastructure as is.”

Cyberworks’ wheelchair can even deal with elevators. “Most elevators can be fitted with Wi-Fi access,” explains Burhanpurkar. “So instead of pushing buttons, the wheelchair can request a floor using Wi-Fi.”

Rogalla believes the technology will promote patient satisfaction. “Health care is traditionally very conservative, and it has to be that way,” he says. “But technology will come no matter what, there’s no question. If we could look into the next 20 or 30 years, it’s going to be the standard. There’s no way navigation stops at the front of the hospital.”

The potential applications for Cyberworks’ technology extend well beyond health care. Airports and airlines have approached the company. And Fernlea Greenhouse, one of North America’s largest producers of flowers, has 18 of Cyberworks’ autonomous tow-tugs in its Ontario outpost. Burhanpurkar says the company’s technology is also guiding industrial floor cleaners used by one of the world’s largest owners of commercial properties.

“We wanted a technology that was universal, that could be applied to anything,” Burhanpurkar explains. “All our products use the same core technology, and we can apply it to completely new products in a matter of weeks rather than years.”

14 Canadian tech entrepreneurs to watch in 2023